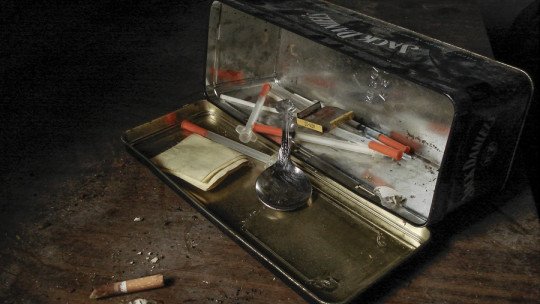 Addiction is a very present problem in society, and so it is not surprising that it has been talked about in works of art.

Next we will see several films about addiction , in which this problem has acquired an important role in the development of the plot, whether the main character of the film is an addict or having to deal with the addiction of a loved one.

Here you will find films that address the issue of addiction, either as this main part of the plot or as a separate problem, along with which the characters have to live. The plots of the films will be mentioned in a general way, to avoid revealing the end or surprise elements of the plot.

Max Renton, and his group of friends and teenage girlfriend are heroin addicts. They have great adventures together, but Renton is aware that he should be rehabilitated and decides to make this change in his life, moving from Edinburgh to London, although this is not enough for his past to leave him in peace.

This film is a good representation of the addictions in real life. It shows, quite clearly, the routes of administration, their short-term pleasurable effects and also their long-term consequences.

It was about a normal day in the life of a group of teenagers in New York City in the nineties . Their life revolves around student parties, sex, alcohol and drugs.

This film shows the key aspect of addictions: the lack of control over behaviour. It also shows the compulsive need to obtain the drug, despite the known consequences, generally harmful to health.

Jim’s life is centered on basketball. The team he plays on seems to be invincible, and so much success begins to play with his mind.

Little by little, Jim is leaving sport and his home behind, moving to the underworld of the Big Apple, where he becomes addicted to heroin. His addiction will endanger both his health and the life he has known .

This film shows very reliably what addiction, especially to illegal drugs such as heroin, means for the individual’s social and family sphere. The subject shows a lack of control, even though he sees his social life deteriorating.

This is another of the films on addiction that have achieved great international success . It is about the lives of four addicts who are addicted to heroin, cocaine and pills. These addictions cause their lives to spiral downward, ruining everything they had and knew.

Although is not a film, but rather a documentary , Addiction has the great advantage that it shows addictions in a general sense and also presents modern treatments and the expert opinion of specialists in the field of addiction healing.

The documentary shows how drugs affect our brain, making it look like a chronic disease with risks of relapse. In the brain there are altered areas that are involved in decision making, in turn related to learning and memory, and behavior control.

The writer Ben Sanderson (Nicolas Cage) is an alcoholic. His addiction, far from causing him calm and tranquillity when he is very stressed, causes him to go into a spiral of self-destruction .

Fed up with everything, he decides to put an end to it by going to Las Vegas. However, there he will meet a prostitute, with whom he will maintain an intimate relationship where both understand each other, but the addictions can be stronger than his love.

This film shows how alcohol addiction is one of the main causes of suicide in people who end up committing it. It also shows how this substance, which is totally legal and very accepted in our society, leads to physical, cognitive and emotional deterioration.

In this film, the life of Carlos, 21, is discussed. He is immersed with his friends in an episode of fun without limits or rules. There’s only alcohol and partying, but then he comes across his reality, which doesn’t go away no matter how much he consumes.

The film shows how the main element of drug use is usually disinhibition, unbridled fun. Recreational drug use, especially in youth, implies a higher risk in the person’s behaviour, an act of defiance.

Ray Charles is a famous soul and R&B singer who lost his sight as a child. In the same way that he is gaining fame over the course of his career, he is becoming fully integrated into heroin .

Fortunately for him, his wife’s help will allow him to share his music and change the world, instead of letting addiction take over and drive him down.

In the film, it is shown that people don’t become addicted just because they do. There is a whole set of elements that can make a person, if he has the opportunity, use drugs frequently and become addicted.

Russell Brand is an English comedian who has been suffering from addiction for years . After the death of Amy Winehouse, due to complications with her addiction and her rehabilitations, Brand decided to prepare this documentary with testimonies of addicts and specialists in the field of addiction.

Alice Green (Meg Ryan) lives in what, at first glance, seems like a perfect family. But appearances can be deceiving Her husband, who loves her, hides a problem of alcoholism , and she did not know how serious it really was.

The film shows how addiction affects the family’s relational health. As loved ones they care about our problems, and how family ties can help heal us or otherwise make the situation worse.

Joe (Charlotte Gainsbourg) is a nymphomaniac, that is, a sex addict. His sexual behaviour is compulsive and is present in every moment of his life.

While sex addiction is not part of the DSM, it is considered a serious behavioral problem because it involves taking risks, such as getting an STD or risking dating strangers, and having sex constantly, like other behavioral problems, can mean not giving time to other day-to-day actions.

Mike McDermott (Matt Damon) has a serious gambling problem . So serious that he has lost all his money betting against a Russian mafioso. His girlfriend, worried, asks him to stop playing, and he promises her that he will stop. But a friend of his needs money, and far from keeping his promise, Mike decides that he will risk everything to win enough money to get him out of trouble.

This film is ideal for understanding how dangerous gambling addictions are, something that in recent years the media, especially television, has underestimated the consequences of pathological gambling.

Jordan Belfort (Leonardo diCaprio) is a clear example that you can have more than one addiction (it usually is, in fact). He wants money so he can pay for his drugs and have as much sex as he wants. The life of this character, who is based on a real businessman, reaches the top of the business world and then sees everything fall apart because of the murky business.

Gwen Cummings (Sandra Bullock) has a serious alcohol problem . So serious that, going drunk to her sister’s wedding and ruining it, she decides to take the wedding limousine afterwards and, without anyone being surprised, crashes it into a family home.

Before she is put in jail, she manages to be admitted to a rehabilitation center to treat her problem, although she considers it unnecessary, only for people who are lost for life.

There he will meet other substance addicts, become aware of their problems and see how cruel these kinds of problems are, especially with a girl he meets there who becomes almost his sister.

It is a very inspiring film , in which the great effort that those who have just come out of rehabilitation must make is understandable. Returning to the environment in which the addiction was acquired risks a relapse.

In this film we talk, above all, about sex addiction . Three people, who see how their problem is sinking their lives, decide to sign up for a program in order to get ahead.

Like typical programs of this type, this one consists of several steps that allow to reach the final goal: the overcoming of the addiction to sex. In addition to testing your will, you will begin to maintain a strong friendship along the way.

Ross is a hotel meth maker, and he markets it to young people. The tape shows how this drug is produced, describing the process as if we were living the symptoms of the use of this drug . Everything happens very quickly.

It is inspired by the true story of Christiane Vera Felscherinow , played in the film by Natja Brunckhorst. It is a very disturbing film.

The plot is based on Christiane’s autobiographical book, “The Children at the Zoo Station”, where she narrates her terrible heroin addiction in the mid-seventies in Berlin.

When she was 14, she started to prostitute herself in order to pay for her daily shot. For a while she became one of the drug addicts in her area, while watching as the cold embrace of death took away several of her friends who were also addicts.

Raoul Duke (Johnny Depp) and Dr. Gonzo (Benicio del Toro) embark on a trip to Las Vegas, with a shipment of various drugs, among them pills and mescaline.

In the film, its director, Terry Gilliam, managed to express a criticism of consumer society, albeit with a certain comic tone.

In the film, Michael Douglas plays a judge who has been appointed as president of the Office of National Drug Control Policy. In addition to dealing with addictions in the United States, he must also deal with his daughter’s cocaine addiction .

Meanwhile, on the border with Mexico, policeman Javier Rodriguez (Benicio del Toro) is taking on one of the biggest drug cartels in the region.

The film shows, without a hint of a doubt, the world of drug trafficking in North America, presenting the drama of addiction knocking on our door.

Another film about drug trafficking. George (Johnny Depp) and Mirtha Jung (Penélope Cruz) are a couple of drug lords who live, throughout the film, a great boom accompanied by the inevitable fall.

The combination of money, glamour, hell and, of course, addiction, is something that is present throughout the film.