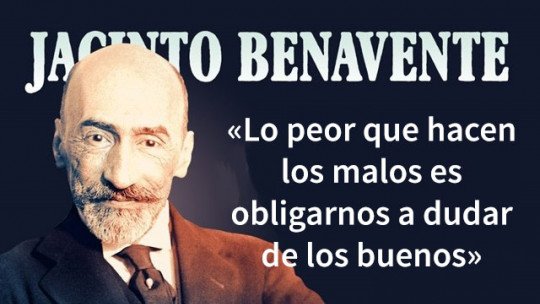 Jacinto Benavente (Madrid, 1866 – 1954) was one of the most outstanding Spanish playwrights and film producers of the late nineteenth and early twentieth centuries.

His immense and prolific work on the stage led him to be awarded the Nobel Prize for Literature in 1922.

Jacinto Benavente wrote plays of all dramatic genres: dramas, comedies, sainetes, tragedies … His expressiveness was based on the naturalness of the characters, the realism with which he worked the most complex plots. Moreover, experts agree in pointing out the exceptional quality of his works not only from the theatrical aspect, but also in the depth of the lexicon and his mastery of the Spanish language.

In today’s article we have set out to compile the best famous quotes and phrases from Jacinto Benavente , to bring us closer to the life and work of this Madrid-based playwright.

1. There are no dangerous readings. Evil never enters through intelligence when the heart is healthy.

A deep reflection on the benefits of reading.

2. Dictators can reform laws, but not customs.

Jacinto Benavente speaks in this sentence about the influence of culture on a society.

3. Love is like Don Quixote: when it comes to its senses, it is ready to die.

When we try to make love emerge from our rational side… it’s that all is lost.

4. Blessed are our imitators, for all our faults will be theirs!

5. Discipline consists of making an imbecile obey those who are more intelligent.

A famous quote by Jacinto Benavente that shows us his soul as a free thinker.

6. There is no feeling that counts; love is an occupation like any other.

A thought that can be interpreted in different ways.

7. When you don’t think what you say is when you say what you think.

8. In matters of love, the crazy ones are the most experienced. Of love never ask the sane; the sane love sane, which is like never having loved.

A necessary reflection on love and how it is only expressed in unreasonable ways.

If your enemy has better arguments than you do… start worrying.

10. The worst thing the bad guys do is force us to doubt the good guys.

A way of expressing that sometimes the powerful try to make citizens fight among themselves.

11. If murmuring the truth can still be the justice of the weak, slander cannot be anything but the revenge of cowards.

Benavente shows us some of the keys to his ethical thinking.

12. There is nothing so desperate as seeing our feelings misinterpreted.

Do you know what kind of feelings there are?

13. If people could hear our thoughts, few of us would escape from being locked up as madmen.

Without the filter of rationalization, we could all be considered mentally deranged.

14. Irony is a sadness that cannot cry and smiles.

Knowing how to use irony and sarcasm is essential for a good playwright.

15. As with debts, there is no place for guilt other than to pay it.

Another sentence by Jacinto Benavente in which he sets out his moral convictions.

What are your personal talents? These are the ones that can catapult you to success.

17. More men come together to share the same hate than the same love.

Having a common enemy makes you closer than anything else.

18. It’s easier to be cool than to have common sense.

A sentence that explains itself.

19. A fixed idea always seems to be a great idea, not because it is great, but because it fills an entire brain.

The mind of the geniuses is open and has the capacity to add more knowledge and experience. The same is not true of dogmatic minds.

20. He who is jealous is never jealous of what he sees; what he imagines is enough.

There are different types of jealousy and jealous people are often jealous because of their tendency to imagine things that are not real.

21. True love is not known by what it demands, but by what it offers.

Benavente makes it clear that true love tends to be supportive.

22. Money can’t make us happy, but it’s the only thing that makes up for not being happy.

A brilliant reflection on the capacity of money to mobilize us.

23. Many good people who would be incapable of stealing our money, unscrupulously steal from us the time we need to earn it.

A criticism of the capitalist system that could have been a famous phrase of Karl Marx himself.

24. Honor is not earned in a day so that it can be lost in a day. Who in one hour can cease to be honored, is that he was never honored.

Honorability is a value that is distinguished by its consistency over time.

In different contexts we know the true character of each person.