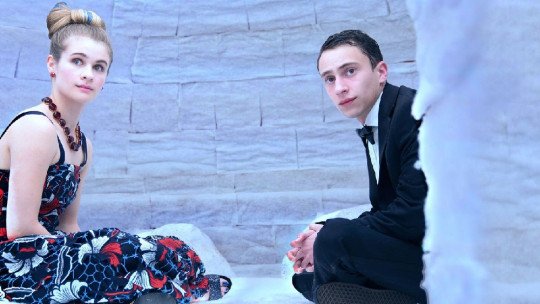 Works of fiction are a very good way to publicize the daily lives of minorities who often suffer the consequences of most people not understanding their situation. People with Autism Spectrum Disorders , until not so long ago, have remained in the most absolute of shadows.

Fortunately, more and more people know about how their day-to-day life is, partly thanks to television series.

Below you can see a selection of 4 television series in which there are characters with autism with an important or leading role. Although there are several more that do not appear here, they allow enough screen time for these characters to be clear about the characteristics and symptoms associated with autism.

Atypical is the last great fiction series in which a character with autism plays an important role. In fact, Sam Gardner, the young man with autism spectrum symptoms, is the main character in this story.

The first thing that catches Sam’s attention is the monotony with which he speaks , the little repertoire and intonations he uses to express himself. This is a characteristic of people on the autism spectrum who can use verbal language fluently, as is the case, although the causes of this are unknown (as is almost everything that has to do with these disorders).

On the other hand, the other great peculiarity of Sam in terms of his way of portraying the lives of many people with autism on the screen is that he has serious difficulties in “reading between the lines” . In other words, Sam’s interpretation of what he is told is often characterized by literalness; he does not recognize what is or is not a metaphor, and his lack of knowledge of certain idioms and expressions makes him really confused, because he does not know what they mean or they make him think that the other person has implied something really strange.

In addition, Sam feels very vulnerable when he is in environments with a wide variety of stimuli. That’s why he often wears a kind of headset over his ears that is actually a noise filter. This allows him to concentrate on the predictable aspects of his day-to-day life, the ways of thinking and acting that he won’t find frightening.

One of Sam’s ways of not getting out of his mental and behavioural routine is to think recurrently about Antarctica and specifically about the penguins that inhabit it. For example, when he gets nervous, in order to calm down he repeats to himself over and over again the names of the four species of penguins that are on that frozen continent, but even when he is not very stressed his thinking ends up leading to theas about Antarctica. The predictability and lack of change in actions and thoughts is of great importance to most autistic people.

One of these typically autistic characteristics is a lack of richness in the nuances of voice intonation. Abed seems to talk like a robot, dispassionately and monotonously, but that doesn’t mean he doesn’t have feelings, although he may appear to do so.

In addition, Abed also has another characteristic of people with some form of autism: he has developed a great interest in a specific area , a range of knowledge in which he usually thinks in a recurrent way. This area of interest (and obsession, in fact) is pop culture, specifically that which has to do with series and films. In fact, the series insinuates that much of what Abed knows is from having seen or heard it on television.

Of course, for the producers of Community it is very convenient to have a character who is always willing to make a wink at series and films that the viewer may know. However, for real people who manifest the symptoms of the autism spectrum, pop culture is too wide a field. The fields of interest of these people tend to be even more specific ; for example, crime series, or the universe of a single fiction series.

Shaun Murphy is a young neurosurgeon with autism who, in many ways, displays the symptoms that the protagonist of Atypical depicts on the screen.

In this series, it becomes clear that people with ASD experience all kinds of emotions, even though they may not always be able to express them in a way that others can understand. Someone with autism is not a robot , but rather a person whose socialization style does not fit in with the rest of the people and who, in addition, is much more susceptible to moments of anxiety and to expression and cognitive problems (many people with ASD are not able to speak and/or experience intellectual disability).

Sheldon Cooper is possibly the most famous character with autistic behavior patterns, and is known at least “by sight” for many thousands of years. In fact, we could say that he is the driving force behind The Big Bang Theory, a fiction work that, at least in its first seasons, focused on creating comic situations out of the social ineptitude of a group of young adults who were maladjusted and had problems relating to women.

Sheldon is a clear caricature of many of the characteristics attributed to autism. Like Abed, he also speaks in a monotonous manner, eliminating any trace of musicality from his voice; however, in his case the creators of the series have tried to make it seem that Sheldon really lacks feelings. This can be seen in the fact that, unlike Abed or Sam Gardner, Sheldon doesn’t seem at all interested in empathizing with anyone and seems to enjoy making reproaches.

On the other hand, where his partners fail to socialize with women, Sheldon shows simple indifference, at best, or misogyny, because most of the women he interacts with know nothing about his area of interest.

Because, yes, Sheldon also has a specific area of interest: physics. However, it must be said that in this case too this range of knowledge seems to open up a lot for the convenience of the script. For example, forms of entertainment such as role-playing games or science-fiction works also seem to be part of this space of Sheldon’s “obsessions”, simply to fit the stereotype of the maladjusted young man. Although it is not unusual for this to happen, there is nothing in these cultural products that is in itself a magnet for people with Autism Spectrum Disorders.