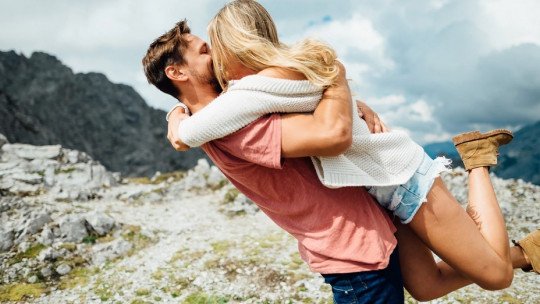 Tests of love don’t have to consist of things we demand from the other person to show how much he or she believes in the relationship. In any case, they can be understood as something much more constructive: a way of knowing, in a rough way, if the affective bond that joins two people is strong or if on the contrary what keeps a couple together has nothing to do with it.

Below is a proposed list of proofs of love so that they can all be used on a daily basis. The idea is to observe the couple’s relationship and stop to consider if there are any emotions between two people that make us think of a shared and exciting project.

An aid to know if it is true love

Love is always complicated , but we can make it a little simpler. In particular, we have several options for knowing, roughly, when a relationship has a solid foundation and when it does not.

There are many ways in which a relationship can be created in which the emotional bond is weak or almost non-existent.
Let’s think, for example, of those who are not very assertive and are afraid to say no so as not to upset the other person. When a relationship begins, it is possible that even though the love is not reciprocated, the decision not to continue giving false hope is not faced.

Another example is in manipulative people who start dating out of interest. In these cases, the relationship is based on someone who tries by all means to get the other person to become practically addicted to the relationship, and for this purpose uses falsehoods and deceptions that feed the emotional blackmail.

Finally, something much simpler can also happen: the love ends but the routine and habits linked to the relationship continue to be perpetuated. In these cases, feelings for each other can be confused with fear of ending a whole lifestyle.

Love tests to evaluate the strength of relationships

To detect these undesirable situations as soon as possible, and in the absence of couples’ therapy, there is nothing like resorting to some tests of love.

1. does not mind showing love in front of others

There are many people who are very reluctant to show their feelings of tenderness to friends or other family members, but that doesn’t mean that it can’t change in any situation. And… if being with your partner isn’t enough of an excuse to show the more affective side to others, what is?

At first it is difficult to let oneself go and offer clear signs of affection to the other person if there are other people watching, but in the end, the pleasure of sharing those moments should more than compensate for the discomfort of others seeing us with different eyes. Expressing feelings is not a crime.

Many people believe that the test of love consists of performing all kinds of pampering on their own initiative, from taking breakfast to bed to letting the other person always choose the restaurant where to dine. However, this does not have to be the case, and in fact it is perfectly consistent with the actions of a manipulative person or a couple who feel guilty and “exchange” those small sacrifices for moments when they fall into infidelity.

On the other hand, one of the best tests of love consists in combining those mimes with moments in which he communicates in an assertive way what his own interests are. After all, a boyfriend, girlfriend, husband or wife is not a child, and treating the other as if he were a minor implies denying his status as a responsible adult. In those cases, an illusion is being lived.

One of the situations in which it is most noticeable if the relationship is based on love and empathy is in conversations. It is at these moments when the only thing we should be paying attention to is the other’s point of view. Not their physical contact or means of living, but their words and speech. Talking face to face means opening a little window into the mental world of the other , it means active listening.

Thus, conversations and face-to-face situations are one of the best tests of love: if there is an interest in the mental characteristics of our couple, this is noticed in our attitude, our non-verbal language, and the presence or absence of impatience for him to finish speaking. Looking at this regularly is very helpful, although we should keep in mind that fatigue can also create distractions not caused by lack of love.

What do we do when we love someone passionately? At the very least, think about that person very often . And, in these times, a good way to sense how often that happens is the amount of phone conversations and social networking that our partner initiates.

Excesses are always bad, of course, and constant texting indicates that something is not right (possibly jealousy or distrust), but the relative absence of attempts to make contact during the time you are not in the same place is reason to ask if everything is okay. Which brings us to the next point.

A relationship is not simply a patchwork of life in which to invest time and resources. It is also a place to pay attention to each other, to see how much we can help. That’s why something as simple as asking “how do you feel?” is such a powerful tool and, on the other hand, a sign of love.

Even in the most perfect couples, mistakes abound. That’s why, when they show up on the other person’s side, it’s good to see if and how they apologize. In the end, if pride outweighs the will to make the other person feel better , something is wrong in that relationship.