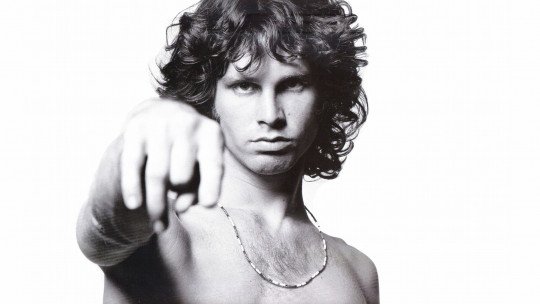 As a member and vocalist of the famous rock group “The Doors”, Jim Morrison has been one of the most iconic voices of the 20th century. During his career, Morrison was associated with many other famous performers such as: Jimmy Hendrix, Janis Joplin, David Crosby and a long etcetera.

The best quotes from Jim Morrison, a unique musician

His songs and personality, made this artist one of the most influential performers in the world of rock. Do you want to know what were Jim Morrison’s most famous phrases? In the text you will find below you can discover them.

1. There are no laws, no rules, you just have to take your friend and love him.

Taking life easy is a philosophy that the singer himself followed.

In life there are all kinds of moments, we must know how to adapt to each one.

4. No one would be interested if I was normal.

Every great artist has an eccentric personality.

There’s no doubt Morrison was an icon for his generation.

6. I believe in a long, prolonged, disarrangement of the senses in order to obtain the unknown.

Flirting with drugs was very common at that time, this singer was no exception.

7. Cancel my subscription to the resurrection.

In this quote we can see the disenchantment Morrison had with life.

8. I like people who shake other people up and make them feel uncomfortable.

It is in the most extravagant situations that we can become most free.

9. People are strange when you’re a stranger.

Our personal predisposition affects how others treat us.

10. Actually, I remember not being born.

A very curious quote that shows us the particular way of thinking of this artist.

11. No eternal reward will forgive us now for wasting the dawn.

We must know how to seize the moment, perhaps we have a limited time in our lives.

Music is capable of provoking a great deal of emotion.

We all think things that we don’t carry out in our lives afterwards, we must know how to differentiate which thoughts are positive for us and which are not.

As we can see from this sentence, Jim Morrison was not a big fan of the seventh art.

15. When you make peace with authority, you become the authority.

If we accept the established order, we will inevitably become part of it.

16. Where is your willingness to be weird?

We must defend our way of being, we are all unique in our own way.

17. Violence is not always bad. What is bad is the infatuation with violence.

Violence is something that Morrison felt somewhat free to do, in a situation of chaos we are free to be who we really are.

18. The day I read that alcohol was bad for your health, I stopped reading.

No doubt he was quite a convinced drinker, as we can see.

19. Expose yourself to your deepest fear; after that, fear has no power, and the fear of freedom shrinks and disappears. You are free.

We must not fall prey to fear, we must overcome it and learn to overcome it.

20. People fear death even more than they fear pain. It’s strange that they fear death. Life hurts much, much more than death. In death, the pain is over.

A very peculiar way of understanding death, but it is true that death is also rest.

21. If my poetry aims to achieve anything, it is to develop people in the limited ways they see and feel.

This singer tried with his music to help people overcome themselves. We all need to overcome our fears.

To understand this artist’s music, we must take a journey into his subconscious.

23. Revolt, and only revolt, is the creator of light, and light can take only three paths: poetry, freedom and love.

For Jim Morrison these aspects were the three fundamental pillars in his life (poetry, freedom and love).

24. Comrades, let us banish the applause, the show is everywhere.

We can create a show anywhere we go, not just on a simple stage.

25. Love cannot save you from your own fate.

Destiny is something that will come to all of us, no matter who we are.

26. A friend is someone who gives you total freedom to be yourself.

Our friends must accept us as we are, otherwise they are not really friends.

27. Keep your eyes on the road, your hands on the wheel.

Being focused is what will lead us to achieve our goals.

28. Death makes angels of us all and gives us wings where we had shoulders as round as ravens’ claws.

A very poetic phrase that tells us that in death we will be free of any physical limitation.

29. The most loving parents and relatives commit murder with smiles on their faces. They force us to destroy the person we really are: a subtle kind of murder.

We must not let ourselves be carried away by the interests of those around us, we must be faithful to our purposes.

30. There’s nothing wrong with being a big mammal.

In fact, the human being is just another animal.

31. I believe in democracy. I don’t think there has to be a president. I think it should be a total democracy.

In this quote we can sense how Morrison had some rather Republican ideas.

32. I’m interested in anything about disorder, chaos, especially activity that doesn’t seem to make sense. It seems to me that this is the path to freedom.

In the disorder and chaos as this singer-songwriter says, we can find an environment where we can feel more free.

33. The attraction of the cinema lies in the fear of death.

The cinema uses the morbidity that death transmits to part of the population, to create a large number of films.

We must pass on our best version to our friends and family.

The great power of the media in people’s minds.

36. Hate is a very underrated emotion.

37. Our culture mocks primitive cultures and prides itself on the repression of natural instincts and impulses.

Indeed, Western society forces us to repress a great deal of our instincts.

38. This is the strangest life I’ve ever known.

As rock stars we can live a very confusing and fast-paced life.

39. Some of the worst mistakes of my life have been haircuts.

Styling was certainly a very important issue in Morrison’s life.

40. Drugs are a gamble with your mind.

At that time, the conception that many people had about drugs was different from the current idea.

41. You feel your strength in the experience of pain.

When they cause us pain, we can show how strong we are.

42. I see myself with an intelligent, sensitive human, with the soul of a clown who forces me to fly in the most important moments.

We must all value and love ourselves, Morrison evidently had a good concept of himself.

43. The future is uncertain but the end is always near.

Society is permanently on the brink; today an event can change the course of history.

44. We fear violence less than our own feelings.

We should know how to accept our feelings and learn to live with them.

45. A hero is someone who rebels or seems to rebel against the facts of existence and seems to conquer them.

This was his personal definition of the term “hero”: someone who against all odds reveals himself against injustice.

46. When other people expect us to be the way they want us to be, they force us to destroy the person we really are. This is a very subtle way of killing. Most parents commit this crime with a smile on their lips.

We should not try to change other people, they should be who they really are.

47. I was just exploring the limits of reality. I’d be curious to see what happens.

This singer looked to drugs as a way out of the life he was leading, something he shared with many other celebrities of the time.

As this quote so well tells us, we must live life to the fullest, taking advantage of every second of it.

Where is our life headed? That’s a question that depends on us.

50. The most important kind of freedom is being who you really are.

We must feel free to express ourselves openly, to show others what our personality is.

51. People who never yawn, nor speak of common places, but burn, burn like fabulous yellow rockets exploding like spiders among the stars.

Repressing our emotions can lead us to one day “explode” emotionally in an uncontrolled way.

Many of us do not or cannot express our emotions, this may result in negative behavior in the future.

The ambition of this group had no limits, they knew themselves capable of anything.

54. I could be a journalist. I think interviews are the new art form. I think self-interviewing is the essence of creativity. That is, asking yourself questions and trying to find your own answers. After all, what a writer does is answer a series of unanswered questions.

In interviews we can show the media how we really are.

Feeling free can make us much happier men.

One of Jim Morrison’s most famous nicknames: The Lizard King.

In order to achieve our goal, we must not hesitate to do our job.

Feeling free was something this singer pursued all his life.

59. Listen, true poetry says nothing; it only shows options. Open all the doors. You may pass through any entrance you wish.

For Morrison, poetry was also a great escape, an art where he could express himself freely.

60. That’s what real love means: letting a person be who they really are. Most people love you for who you pretend to be. To maintain their love, you keep pretending, acting. You come to love your pretense. It’s true, we are trapped in an image, in an act, and the sad thing is that people get so used to their image and get hooked on their masks. They love their chains. They forget who they really are. And if you try to remind them, they hate you for it, they feel like you’re trying to steal their most precious possession.

We should not change our way of being by maintaining a relationship, who we are is something much more important.

61. We could plan a murder or start a religion.

Man is capable of everything, all the positives and all the negatives of society.

62. Now listen to this… I’ll tell you about Texas radio and the big beat.

In the interviews Morrison showed how he was, the character he possessed won him a good number of fans.

63. Personal, private, solitary pain is more terrifying than what anyone could inflict.

Emotional pain can be very difficult to cope with, the comfort of others may sometimes not help.

64. The time for hesitation has passed.

By being true to ourselves we will achieve everything we set out to do.

The Doors’ rise was seen by everyone as unstoppable.

66. This is the end, my beautiful friend.

One of Jim Morrison’s most famous quotes, in the famous song “The End”.

With one look we can get to know what the other person is thinking.

We may not have material goods but still feel completely free.

69. The streets are immortal fields.

The streets are where society relates, the big cities seem to have no end.

70. Warm my mind by your soft furnace.

In the songs of “The Doors”, their lyrics often talk about personal relationships.