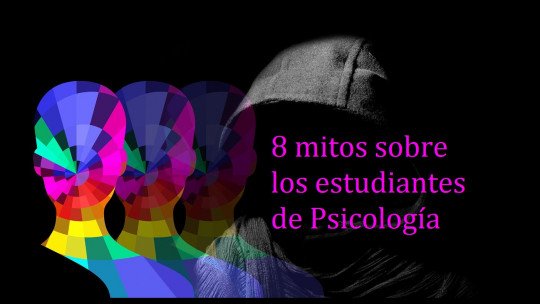 Psychology is one of the most popular careers in many countries. At the same time, what is done within the faculties dedicated to its study is confusing enough that a series of myths about the students of this career have arisen .

Myths about these people’s interests, wild hypotheses about their abilities, stereotypes turned into caricatures… ideas that, in short, have only served to envelop psychology with an aura of obscurantism that offers a deeply distorted vision of the objectives and methods of this discipline.

These are some of these myths and the reasons why they are not true.

1. want to become your best friend

Nothing could be more unfortunate than to think that one’s self is intelligent or interesting enough to push all the local psychology students to be our friends, as if they felt the urge to enrich their lives by coming into contact with our fascinating, fascinating way of living life.

They are a kind of spiritual advisors

A very common idea is that psychologists and psychology students are trained to tell people how to live their lives in the best possible way. Nothing could be further from the truth.

Firstly, it is impossible to create a set of very precise rules of behaviour that are applicable to everyone and at the same time base their validity on the scientific method, which serves to study generalities. That is why their job is not to give a firm answer when, after spending fifteen minutes talking to them about the course of our relationship as a couple, the monologue is finished off with a: “then… should I cut her off?”

3. They end up becoming a bald man with glasses and a graying beard

Many graphic representations of what psychologists look like characterize them as middle-aged men with round glasses, a beard (or mustache and goatee) and an old-fashioned wardrobe, as if upon graduating from psychology students metamorphosed into a cloned version of the psychoanalyst Sigmund Freud.

However, there is one fact that serves to totally refute this stereotype: psychology is currently a career pursued mainly by women .

4. The classic: they will read your mind

This is wrong in many ways.

The first of these is that, obviously, no one can read anyone’s mind . Currently the scientific panorama sees as a revolution the creation of machines and software capable of transforming a pattern of electrical activity of the brain into a collage of images that resembles a little the situation that the person being observed is imagining, this is something that has required years of work and a lot of money. None of this would make sense if psychology students had the ability, even remotely, to read what one thinks.

The second reason is that the mind cannot be read by analysing non-verbal language either. One can estimate the chances of being nervous, relaxed or slightly upset from the observation of microexpressions, but little else. This does not allow one to know in detail what one is thinking, nor the reason behind these emotional states.

The third of these has to do with the above. Even if they could read your mind, this would require a minimum of effort, and most likely they wouldn’t have enough incentive to be interested in what you are thinking with any frequency .

5. They are very interested in the problems of the people around them

Students of psychology do not have to be especially self-sacrificing or supportive , especially if we take into account that a good part of them do not even plan to dedicate themselves to psychotherapy.

Moreover, some are interested in psychology to obtain impersonal and scientific knowledge about the functioning of mental processes in human beings in general.

6. They study psychology to understand their mental disorders

It is possible that some do, but there is certainly no law of cause and effect that dictates that this has to be so. Mental disorders are only one of many things studied during the course of a career.

Moreover, it is possible that some of them have started this career simply to understand why some people study psychology, or why some people are left-handed and others are right-handed.

7. They would like to put electrodes on your head “to see one thing”

Of course, using techniques to record the brain’s electrical activity patterns is one of the most interesting aspects of psychology, but that doesn’t have to transform students in this career into people whose eccentric interests end up scaring away their friendships.

Furthermore, psychology is a very broad field of study , and not all psychologists end up being interested in research in laboratories or in clinics where the nervous system is studied directly. Many psychology students prefer to base their activity on the study of behaviour, and not so much on the observation of the functioning of neurons.

This is not even valid for people who study psychoanalysis , which differs from what is considered psychology today.

But some may be, not because of what they’re studying, but simply because post-adolescence is wreaking havoc.