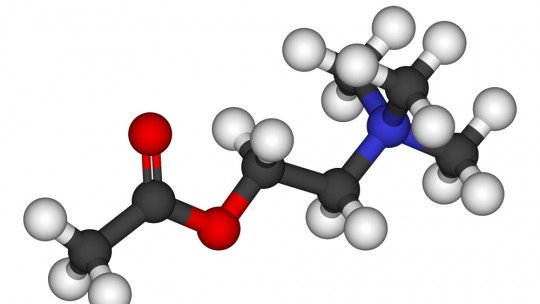 The transmission of the nerve signal takes place through bioelectric impulses generated by the neurons and transported from one to another until the message reaches its destination.

This transport depends largely on the action of neurotransmitters, substances that are transmitted from one neuron to another through synapses and cause an excitatory or inhibitory effect on the post-synaptic neuron.

One of these neurotransmitters, and in fact the first one to be identified, is acetylcholine , a substance we will talk about in this article.

Acetylcholine is a substance classified as an ester, made up of compounds of an oxygenated acid and an organic radical. As I have already mentioned, it is the first neurotransmitter to be discovered, in 1914, and the different elements responsible for its synthesis and elimination make up the so-called cholinergic system .

Acetylcholine is mainly seen as an excitatory type neurotransmitter , but it can also exert an inhibitory action depending on the type of synapse in which it acts.

On the other hand, it is considered that acetylcholine is one of the main neurotransmitters of the nervous system and one of the most common, and can be found throughout the brain and in the autonomic nervous system.

The synthesis of acetylcholine takes place inside the neurons, specifically in their cytoplasm , by the binding of acetic acid or acetyl-CoA and choline thanks to the enzyme cholineacetyltransferase.

After that, the acetylcholine is sent along the axon to the terminal button, where it will be stored until its use and release in the synaptic space .

The action of acetylcholine occurs through its interaction with a series of receptors that react to its presence in the different locations where this neurotransmitter acts. Specifically, we can find in the nervous system two main types of cholinergic receptors .

This is a type of metabotropic receptor, i.e. it requires the use of second messenger chains for that allow the opening of ionic channels . This implies that its action is usually slow and has a more prolonged effect in time.

This type of receptor usually has the highest level of presence in the brain, as well as in the parasympathetic nervous system. They can have both an excitatory and an inhibitory performance.

This type of receiver, which also has an affinity for nicotine, is ionotopic, which generates a rapid response by the receiver that allows the immediate opening of the channel. Its effect is mainly excitatory. They are usually found in the connections between neuron and muscle .

Most neurotransmitters are received by the presynaptic neuron after they are emitted. In this sense, acetylcholine has the particularity that it is not recaptured but is degraded by the enzyme acetylcholinesterase present in the synapse itself.

Acetylcholine has a very short lifespan at the synapses because it degrades very quickly.

Acetylcholine is a neurotransmitter that can be either excitatory or inhibitory depending on the receptors and the location where it is released. It can act in different places and have different functions for the body, some of the main ones being

The voluntary movement of the muscles requires the action of acetylcholine to be performed, by causing the muscle contractions necessary for the movement. In this aspect the functioning of acetylcholine is of an excitatory type, acting through the ionotopic receptors.

Acetylcholine is one of the main components through which our organism can prepare for action in the face of different stimuli or be deactivated once the threat has ceased. This neurotransmitter acts at a preganglionic level, that is, in the transmission of nerve impulses between the medulla and the ganglion , both in the sympathetic and the parasympathetic system.

Paradoxical sleep or REM sleep is affected by the action of acetylcholine, which participates in the structure of sleep and gives it different distinctive characteristics.

Acetylcholine also has neuroendocrine function in the pituitary gland , since its action causes an increase in vasopressin synthesis or a decrease in prolactin synthesis.

The learning capacity of the human being through perception is largely mediated by the action of acetylcholine, as well as by maintaining attention and even awareness. Acetylcholine causes the cerebral cortex to remain active and enable learning .

Acetylcholine is also a substance of great importance in forming memories and configuring our memory , participating in the management of the hippocampus from this area.

The activity of acetylcholine mediates to a great extent in the perception of pain.