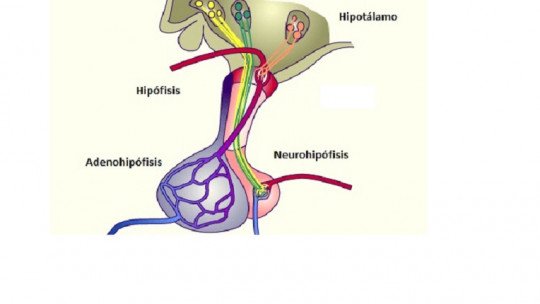 Our body is made up of a large number of different structures, which in turn are made up of millions of cells. In this great network, we can find that there are a series of chemical substances secreted by the organism and whose action largely regulates our behavior and allows phenomena such as growth, sexual behavior or foraging. These are the hormones, which circulate through the endocrine system, in which we can find different structures, some of them at the brain level.

In this sense, the pituitary gland stands out, which in turn can be divided into several substructures. One of them, which we will talk about throughout this article, is the adenohypophysis .

It is a small brain region of great importance for our development as human beings, its main function being to regulate the emission of large amounts of hormones. It is therefore part of the neuroendocrine system, and in particular is linked to hormones related to growth, metabolism and sexuality .

This region of the brain is highly vascularized, and has a large number of glandular cells . In this sense, the adenohypophysis is made up of six large types of cells, of which at least five are known to release the different hormones that the adenohypophysis secretes and regulates: somatotrophs (which release growth hormone), mammotrophs (which influence the release of prolactin and thyrotropin), corticotrophs (which secrete ACTH), gonadotrophs (which are linked to sex hormones, in this case the follicle-stimulating hormone and lutein), thyrotropes (stimulating prolactin synthesis, but especially thyrotropin) and chromophobes (believed to serve to renew the possible loss of the former).

As we have seen in the previous section, the main function of the adenohypophysis is to secrete and regulate the levels of different hormones. These hormones are fundamental when generating and allowing different biological processes. Among the different hormones it generates, the following stand out.

Also known as adrenocorticotropic hormone, this substance is fundamental when generating endogenous glucocorticoids , mainly affecting the adrenal glands. Its action generates the stimulation of different hormones by this cortex, which allow aspects such as metabolism (for example, it influences the secretion of insulin), homeostatic balance and inflammatory processes to be regulated.

Beta-endorphins are another hormone released by the adenohypophysis. They are substances that act as endogenous opioids, generally associated with moderating, diminishing or even inhibiting the sensation of pain . In turn, it generates feelings of pleasure and relaxation. It is generated when making great efforts, or in pregnancy and childbirth.

Fundamental hormone that regulates the functioning of the thyroid, stimulating its action the secretion of thyroid hormones and the regulation of these in the body.

This hormone is essentially known to be in charge of generating milk production in the mammary glands after pregnancy (although the hormone itself already starts to increase its amounts during pregnancy). Apart from this action, it also influences the growth of the breasts, the inhibition of menstruation and the male refractory period.

An essential substance in the field of reproduction, the follicle-stimulating hormone plays a role in stimulating the production of oocytes and oestradiol in women (the same applies to the formation of sperm in men). It also has an effect on physical development and sexual maturation .

This hormone is deeply linked to reproduction and the corpus luteum, one of its most well-known roles being to trigger the ovulation process. In the male it also plays a role in reproduction and sexuality, since stimulates the production of testosterone by the Leydig cells of the testicles. It also contributes to the genesis of progesterone, in such a way that it facilitates the implantation of a possible fertilized egg.

This hormone is essential, as its name suggests, for the stimulation of growth and physical development. Muscles and bones are affected by this hormone, among other structures. Also is associated with the consumption and metabolism of fats and nutrients and their use in the body.

Alterations linked to this brain structure

The adenohypophysis is a fundamental structure for the human being, and its alteration or injury can generate different disorders and consequences of variable severity.

In this sense it is possible to find that its dysfunction can generate growth disorders, among which we can find both different types of dwarfism and gigantism (due to growth hormone deficit or excess). The role of the adenohypophysis in the generation of thyroid hormones means that its dysfunction is linked to suffering from both hypothyroidism (by default) and hyperthyroidism (by excess).

It can also affect reproductive function, affecting both the libido (e.g. hyperprolactinemia can occur) and the formation of hormones and sex cells themselves. For example, in the case of women, problems may arise or even the cessation of menstruation and the ability to produce eggs. Finally, it can also generate or affect metabolic disorders (including diabetes) and cause problems in the metabolism and use of elements such as fats and carbohydrates.