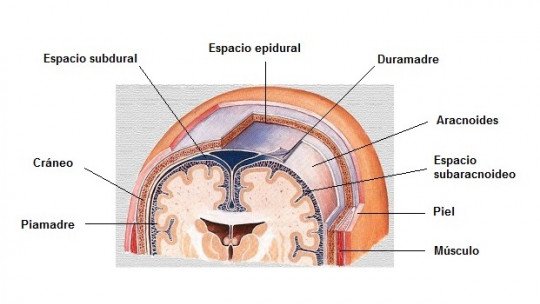 The meninges are a series of membranes that together with the skull and spine protect the central nervous system , so that minor hits or injuries are prevented from altering its functioning or destroying it completely.

In addition, they allow the brain to be in place and, because there are different types of pain receptors in them, we can perceive that there is some kind of problem or injury. In this article we will explore the arachnoid membrane in order to analyze what it is, its peculiarities and functions.

The arachnoid, together with the dura mater and the pia mater, is one of the three meninges . These are membranes that protect our brain and spinal cord from injuries from the outside and have an important role in our survival. They are located one below the other, forming three small protective layers.

In the case of the arachnoid we are in front of the intermediate membrane, being in contact with the dura mater and the pia mater. It turns out to be the most fragile and prone to rupture of the three. Another of its main characteristics is that it is not vascularized.

One of the main aspects that distinguish it from the other two meninges is the fact that it contains the subarachnoid space, through which the cerebrospinal fluid circulates.

By observing the arachnoids we can identify the existence in them of different layers or parts.

It corresponds to the part of the arachnoid that is in contact with the dura mater . Its cells are very close together and hardly allow the passage of interstitial fluid, being the most resistant part of the arachnoid. This layer prevents ions and molecules from entering or leaving. However, a series of arachnoid granulations or villi can be distinguished in this layer through which they connect with the existing veins in the dura mater, which allows the cerebrospinal fluid to be expelled at the end of its cycle.

The cells of the arachnoid barrier layer project towards the pia mater, forming a network that crosses the subarachnoid space which in turn forms a web or mesh that in fact gives its name to the meninx (due to its resemblance to a spider’s web). Within these projections we find net fibres, anchor fibres and microfibres. The exact function of the trabeculae is not yet fully known, although it is speculated that they are capable of sensing the pressure caused by the cerebrospinal fluid.

Although more than part of the arachnoid is a space between its plates, the subarachnoid space is one of the most important parts of the arachnoid. This is because it is through this space that the cerebrospinal fluid passes. In this space we can also find a series of important cerebral pits and cisterns in which the cerebrospinal fluid accumulates and which allow its distribution.

In addition to the brain itself, an orbital subarachnoid space can be found surrounding the optic nerve.

The arachnoid is a membrane that, like the other meninges, has various functions that allow and favour our survival.

Despite being relatively fragile, the arachnoid together with the rest of the meninges allow the brain and the spinal cord to be protected against hits and injuries , as well as contamination and infection by harmful agents.

It is in the arachnoid and in the different cisterns of the subarachnoid space that the cerebrospinal fluid circulates, an essential element to keep the neurons of the nervous system alive by nourishing them and at the same time allowing the elimination of the residues of brain function.

The cerebrospinal fluid carries the residues of the brain activity, but it is necessary to expel them . This is done through the blood of the dura mater veins, with which the arachnoid communicates. It also prevents the accumulation of excess cerebrospinal fluid, which continues to be secreted.

4. Allows the brain to float

The fact that the cerebrospinal fluid circulates inside it allows the brain to float to a certain extent , which reduces its weight and allows it to maintain its morphology.

Although this is not completely known, it is suspected that it is the arachnoid trabeculae that allow the body to detect increases in intracranial pressure.

There are several affectations that are linked to alterations in the arachnoid or in another of the meninges. Among these alterations we can find the following.

Small cystic structures can form inside the arachnoid and fill with spinal fluid. While they may not cause problems, they may create pressure that damages the nervous system. Headaches, sensation problems, paresthesias, or paralysis are common.

Both arachnoids and the rest of the meninges can succumb to a viral or bacterial infection, becoming inflamed and causing different symptoms such as dizziness, headaches or weakness. The composition of the cerebrospinal fluid that circulates in the arachnoid may be altered, as well as causing compression of the brain.

This is a disorder in which cerebrospinal fluid accumulates inside the skull , in this case because the parts of the arachnoid that allow communication between the skull and the blood in the veins do not function properly, accumulating too much fluid and not re-entering the blood.

It occurs when due to an illness or injury (such as from a head injury) , blood enters and floods the subarachnoid space. It can be fatal. Headache, altered consciousness, and gastrointestinal problems such as nausea and vomiting are common.