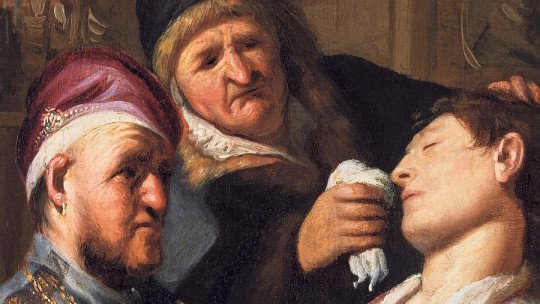 We are given bad news, we get up too fast, we exercise too much, we get heat stroke or we feel such extreme pain that we lose consciousness. These are all situations that can lead to us suffering a fainting spell, which is understood as a loss of consciousness that occurs in a transitory manner and is extremely common.

No one, or almost no one, likes to faint, as this implies a feeling of discomfort before and after the loss of consciousness and puts us in a situation of vulnerability; but for some people, the mere idea that they might do so generates an intense panic that makes their day-to-day life very difficult. This is asthenophobia , a disorder that we are going to talk about throughout these lines.

Asthenophobia is understood as extreme fear or phobia of fainting . This is a specific phobia, which implies the existence of a high level of panic and distress in the presence or exposure to a certain stimulus or situation.

This disorder is classified in the group of blood-injection-damage phobias or SID. This problem may appear in a unique way and without other problems, but it is also usually linked to other psychiatric disorders such as agoraphobia , in which there is a fear of suffering some type of mishap in situations where it is difficult to receive help (such as in open spaces with large crowds or very few people, or in closed and crowded places such as public transport).

It may also be related to panic disorder . The anticipatory anxiety typical of this disorder facilitates symptoms that may be associated with dizziness and weakness or even in some cases with fainting.

Interestingly, phobias linked to damage and blood can have a physiological response that can lead to fainting or feelings linked to weakness and the presence of damage, something that makes the phobia itself favour the arrival of the panic-generating situation.

Physical sensations such as sweating, dizziness or feeling weak are common in anxiety, but are also common shortly before fainting. In this way, the anxiety itself is retroactive to itself, something that makes this problem something that generates a lot of suffering for the person experiencing it .

This panic and anguish can generate a strong physiological activation, causing tachycardia, hyperventilation, sweating, tremors, tingling … and even anxiety crises.

The fear of its occurrence usually generates an anticipatory anxiety, which leads the person to avoid any situation in which what is feared or linked to it may appear.

Asthenophobia is a very common condition in multiple conditions such as the above-mentioned agoraphobia, and it can cause great affectation in people who suffer from it. It must be taken into account that feelings of weakness and dizziness can come from many sources.

Thus, exercise, intense heat or nervousness can even arouse anxiety in these people if they consider them to be a risk or associate it with the possibility of fainting, especially if it has occurred previously. They may also avoid crowds or public transportation if they also suffer or end up suffering from agoraphobia. This can make their leisure time more difficult or even cause alterations in their work performance depending on the occupational field in which they work.

Likewise, health problems such as hypotension, febrile episodes or those that produce weakness or dizziness can be experienced as something traumatic since they can be associated with the possibility of fainting. Pregnancy can also be a highly stressful time, due to hormonal changes and the risk that fainting can also harm the baby.

In addition, the fear of fainting will cause you to avoid actions that could pose a risk in case you lose consciousness. Also can lead to situations of dependency towards others , being unable to leave the home alone for fear of fainting.

Possible causes of this disorder

The exact causes of this or other phobias are not known, but generally we can talk about the interaction of a great diversity of factors and there are numerous theories about it .

First of all, we must take into account that this phobia can have an evolutionary meaning: fainting means losing consciousness and remaining in a state of vulnerability which, in nature, could mean death. In this sense it could be a type of phobia for which there is a certain inherited predisposition, given that it prevents us from harming ourselves .

Another common explanation can be found in the experience of aversive and even traumatic experiences that have been associated with fainting. For example, having fainted in public and being teased and harassed for it, having suffered or witnessed some kind of traumatic event in which unconsciousness ended up having painful repercussions. It is even possible that the aversive event with which the fainting has been associated may have happened to someone else.

It is also possible that the phobia was born due to the acquisition of cognitive patterns in which fainting is linked to weakness . This is especially relevant in rigid environments where vulnerability is not allowed and punished. Thus, there may be an effect on educational patterns received throughout life.

Asthenophobia can be a disabling problem, but fortunately it is possible to treat it through psychotherapy . As with the rest of the phobias, the one that presents the most success is exposure therapy.

This type of therapy involves the elaboration between patient and therapist of a hierarchy of anxious situations that can be ordered according to the level of discomfort they generate, and then, starting with the medium level, an exposure to the feared stimuli, until the anxiety lowers by itself (or, if another procedure known as systematic desensitization is used, until it is lowered by an activity incompatible with anxiety).

Gradually, as the subject succeeds in lowering his anxiety level (at least by half), he will move up the hierarchy.

In the case of asthenophobia, exposure to situations avoided by the fear of fainting can be made in order to reduce day-to-day impairment. But it is also advisable, in order to treat it truly, to make an interoceptive exposure. That is, to expose the subject to sensations similar to those he would experience when he is close to fainting.

It is also necessary to work at a cognitive level: it is necessary to discuss the why of this fear, what it implies for the subject or how much it limits him, as well as to restructure possible biases and disadaptive beliefs. It may be useful to question the risk and real probability of fainting, or in the case of traumatic events (a rape or a car accident for example) this factor should be worked on carefully and contribute to reprocessing the event in a way that does not limit the patient’s life .

Finally, the use of relaxation techniques can be useful, or even in extreme cases some anxiolytic could be pre-written in order to work the problem more easily (although it is not usually recommended).