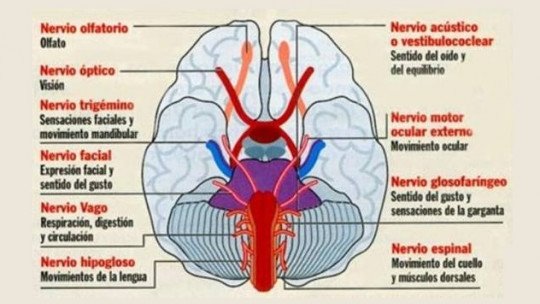 Throughout our lives we do a lot of things. We run, we jump, we talk… All these acts are voluntary elements that we do on a voluntary basis. However, we also do a lot of things that we are not even aware of, many of which in fact are what keep us alive and able to do the voluntary ones, such as controlling our heart and respiratory rhythm, accelerating or slowing down our physiological systems or digesting.

What is the vegetative nervous system?

The connections with the different target organs of this system are both motor and sensory, there being both efferences and afferences. It is therefore a system that sends information from the parts of the brain to the organs, provoking a specific reaction or action in them while at the same time collecting information about their state and sending it to the brain, where it can be processed and acted upon. In spite of this, in the autonomic nervous system there is a predominance of efferences , that is to say, their main function is to emit signals in the direction of the organs.

The neurons of the autonomic nervous system that connect with the various organs of the body do so generally through the ganglions, having pre and post-ganglionic neurons . The action of the pre-ganglionic neuron is always due to the action of acetylcholine, but in the neuron interacting between the ganglion and the target organ the hormone released will vary according to the subsystem (acetylcholine in the parasympathetic nervous system and noradrenaline in the sympathetic nervous system).

The autonomic nervous system is one of the most vital systems to keep us alive, mainly due to the function it performs.

The main function of this system is the control, as we have already indicated, of unconscious and involuntary processes, such as breathing, blood circulation or digestion. It keeps the processes of the internal organs and viscera in shape and activated , while allows the detection and control of internal problems .

It also prepares us to deal with specific situations mediated by the environment, such as the secretion of saliva or digestive enzymes when faced with the sight of food, activation when faced with possible threats or deactivation and regeneration of the system through rest.

What controls the autonomic nervous system?

As part of the nervous system in charge of controlling the correct unconscious visceral functioning, the autonomic or vegetative nervous system is innervating most of the organs and body systems, with the exception of the muscles and joints that govern voluntary movement.

Specifically, we can find that this system controls the smooth musculature of the viscera and various organs such as the heart or lungs . It also participates in the synthesis and expulsion of most of the secretions towards the outside of the body and part of the endocrines, as well as in the metabolic processes and reflexes.

Some of the bodies and systems in which this system is involved are the following.

The autonomic nervous system governs the pupil opening and the ability to focus the gaze , connecting to the muscles of the iris and the eye as a whole.

The heartbeat and blood pressure are fundamental elements for the human being, which are governed unconsciously. Thus, it is the vegetative nervous system that is in charge of regulating these vital elements that keep us alive second by second.

Although we are able to control our breathing to a certain extent , we are not conscious of the fact that we are breathing continuously , nor, as a rule, are we conscious of the rhythm with which we need to inhale. Thus, breathing is also partially controlled by the autonomic nervous system.

Through food, the human being is able to acquire the various nutrients that the body needs to continue to function. While the behavior of eating is consciously controlled the process by which the digestive tract transforms the food and acquires from it the necessary components not, being the set of actions that the body performs during digestion involuntary and governed by the autonomic nervous system.

Although the sexual act itself is performed in a conscious way, the set of elements and physiological reactions that allow it to take place are fundamentally controlled by the autonomous system, which governs processes such as erection and ejaculation . Furthermore, these processes are complicated when a sensation of fear or anxiety is experienced, something that links it to various physiological states.

6. Secretion of enzymes and residues

Tears, sweat, urine and feces are some of the substances the body expels into the environment. Their secretion and expulsion must and/or can be altered in part due to the functioning of the autonomic nervous system . The same applies to the secretion of digestive enzymes and saliva.

Parts of the autonomic nervous system

Within the autonomic nervous system we can find a series of very important subdivisions, which perform different functions . Specifically , the sympathetic and parasympathetic nervous systems stand out, which carry out opposite functions in order to allow the existence of a balance in the body’s activity. A third system can also be found, the enteric system , which is mainly responsible for the control of the digestive tract.

Being one of the divisions of the autonomic nervous system, the sympathetic system is in charge of preparing the organism for action , facilitating the response of fight or flight to threatening stimuli. To do this, it produces an acceleration of some systems of the organism and inhibits the functioning of others, spending a great deal of energy in the process.

The mission of this part of the autonomic nervous system is to prepare the organism to respond in an agile way to risk situations, taking away priority from certain biological processes and giving it to those that allow us to react with agility. This is why its function is of ancestral characteristics, although it is no less useful; it adapts to modern life situations and can be activated by relatively abstract ideas, such as the certainty that we will be late for a company meeting.

It is this branch of the autonomic nervous system that is responsible for returning to a state of rest after a period of high energy expenditure . It is in charge of regulating and slowing down the organism, allowing the recovery of energy while allowing the functioning of various systems. In other words, it is responsible for the regeneration of the organism, although it also intervenes in the generation of the orgasm, something that does not seem to have much to do with the other functions with which it shares biological roots.

Although the parasympathetic nervous system also has a clear influence on the digestive tract , there is a subdivision of the autonomic nervous system that specializes almost exclusively in the system by which we incorporate nutrients into our body. This is the enteric system, which innervates the digestive tract and regulates its normal functioning.

As it is in charge of one of the most important systems for survival, the enteric nervous system has to be fundamentally automatic, and constantly concerned with maintaining the biochemical balance that exists in the different environments of the organism, adapting to the alterations that may occur depending on what is ingested, the state of activation, the hormones that circulate in the blood, etc.