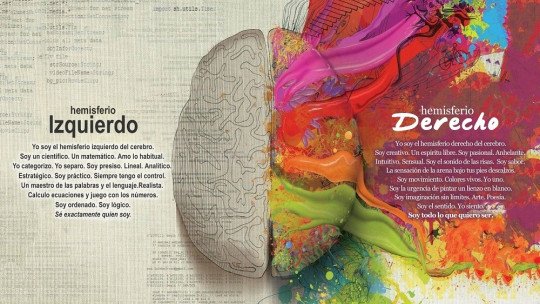 In this article we will see what the brain hemispheres are, what their characteristics are, and how they differ.

Brain hemispheres: what are they and how do they work?

In recent years, a multitude of courses, tests, e-books and books have appeared on social networks that explain “the big differences between using one or another hemisphere of the brain”, and even tips and exercises to achieve a perfect balance (sic) between both hemispheres.

However, it is worth considering: Is it true that we tend to use one hemisphere more than another? Is this conception that each hemisphere has different functions accurate? To answer these questions, we must know what the brain hemispheres are, even if only from a basic definition.

The cerebral hemispheres are the two structures into which the brain is divided, and are separated from each other by the interhemispheric cleft (or intercerebral cleft). These two bodies belonging to the Central Nervous System are very similar to each other, and are practically symmetrical with each other, although there are some differences in their proportions and folds.

On the other hand, the hemispheres of the brain are connected to each other by the corpus callosum; it is through that part of the brain that information crosses from one to the other.

However, this knowledge, although for some reason it has taken root in the collective culture and everyone seems to take it for granted, is not entirely true. This is a widespread myth that has little or no relation to reality and to the available scientific data. Without going any further, the right hemisphere also performs functions associated with the processing of some aspects of language, such as intonation and intensity.

On the other hand, the brain has a great capacity to adapt to challenges, and each hemisphere is able to “learn” to carry out functions performed by parts of the opposite hemisphere if these regions are damaged . This faculty is called brain plasticity, and it shows us to what extent the functioning of our brain is not fixed.

Science and research to shed some light

Data and information on the issue of functional differences of the brain’s hemispheres come from neurological studies from the early 1970s of patients who had their corpus callosum (the fibers connecting the two hemispheres) cut as a shock intervention to treat epilepsy.

Some of the academics and researchers who contributed most to the study of the brain in patients without a corpus callosum were the psychologists Roger W. Sperry and Michael Gazzaniga , who discovered that the two halves of the brain developed their processes independently and with different dynamics.

However, it should be noted that in healthy people whose cerebral hemispheres are correctly connected via the corpus callosum, the perceptive and executive processes take place in the brain as a whole , so that the different brain regions and hemispheres share information via the corpus callosum. Although certain regions of the brain are more focused on certain functions, normally a very small part of the cerebral cortex is not totally irreplaceable: if it is injured, another part will take over those functions that have been “orphaned”. And the same goes for the hemispheres of the brain in general.

Today, neuroscientists (neurologists, biologists and psychologists) are trying to understand how this complex coordination between hemispheres takes place.

Creativity, right hemisphere. You sure?

It should also be taken into consideration that the type of everyday tasks that require “a particular hemisphere” according to popular belief, does not entirely fit into the categorization left hemisphere / right hemisphere .

One of the skills with which it is easiest to debunk the myth is creativity. Although it is easier to assume that creative tasks are performed in the right hemisphere and repetitive and analytical tasks in the right, the reality is that such tasks are more complex and involve the brain in a more global way than one might expect if one believes the myth.

Furthermore: “being creative” can take many forms, is too open a concept to be encapsulated in a task easily recognisable as a process within the human brain.

In fact, there is a study that compares the brains of “letter” students (philology, history, art) with “science” students (engineering, physics, chemistry)… and the results are surprising . We explain it here:

Studies on the subject

Several investigations point out that the right hemisphere has a greater role in moments when we have great intuition . In fact, a study published in PLOS found that the activity of the right hemisphere was greater when the subjects evaluated tried to solve a task in an intuitive way, with little time for reflection.

Another investigation revealed that a brief exposure to a clue that gave some clues to solve a puzzle was more useful for the right hemisphere than for the left hemisphere. The right hemisphere was activated more clearly, leading some of the participants to the solution of the task.

Anyway, it must be clarified that insight (the process of internalization or internal understanding) is only one aspect of creativity. For example, the ability to tell stories would be another creative aspect. Here we already find an important schism: studies that evaluate the influence of each hemisphere in certain tasks have revealed that it is the left hemisphere that is most involved in the process of inventing stories , while the right hemisphere is in charge of looking for an explanation of the story. This curious distribution of functions was called “interpreter phenomenon” by Gazzaniga.

In an overview of the brain hemispheres and their (not so) differentiated functions, Gazzaniga described, in an article published in Scientific American , the left hemisphere as “inventor and interpreter” and the right hemisphere as “truthfulness and literalness”. Adjectives that contrast with the popular conception about each hemisphere.

In any case, it is clear that virtually no cognitive process is based on very limited parts of the brain. Everything occurs in an organic network of interconnected nerve cells, which do not understand the closed differentiations and categories established by human culture. That is why we must have that the differences between the brain hemispheres are relative , not absolute.

Concluding: between simplifications, exaggerations and corners of reality

The scientific evidence does not correspond with the myth that the left hemisphere is linked to logical processes and the right hemisphere to the creative realm. If this is so, why do people and even professionals in psychology or the neurosciences keep repeating this mantra?

One of the possibilities to understand how a myth expands and consolidates itself in the collective culture is its seductive simplicity . People are looking for easy answers to questions that are already quite naive: ” What kind of brain do I have? “.

With a quick search on Google or on the various social networks, a person without scientific knowledge and with this personal concern can find applications, books or workshops to “improve his weak hemisphere”. When there is a demand, the supply soon appears, even if the scientific basis for the issue is rather debatable. As in this case, where simplification makes this information verging on falsehood.

It is therefore difficult to combat a mistaken belief system, since the complexity involved in the functioning of our brain cannot be summarized in a brief basic outline. Nevertheless, professionals in psychology and mental health and scholars in neuroscience should be in charge of rigorously informing and denying these myths and simplifications .