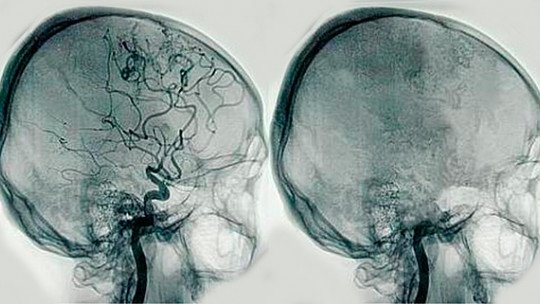 All our organs need the action of the cardiovascular system to survive, because thanks to it they receive the oxygen and nutrients necessary for their survival and proper functioning.

This includes our nervous system, which needs a continuous supply of these elements. But sometimes there can be alterations that damage the vascular system that irrigates the brain or symptoms that suggest the existence of such damage.

Therefore, it is necessary to have different techniques that allow us to observe and analyze the flow of blood in the brain, being one of the best known techniques cerebral angiography .

What is a cerebral angiography?

Cerebral angiography is a medical evaluation technique that allows the study and analysis of brain flow and the health of the cerebrovascular system. It is a technique in which x-rays are used to visualize by injecting a contrast into the main cerebral blood vessels the flow and condition of the circulatory system. The images obtained are generally very clear and allow precise identification of alterations in the blood circulation of the brain.

The procedure is as follows: after placing the patient on the x-ray table, his or her head is immobilized and a sedative is administered while heart activity is monitored. A catheter is then inserted into the arteries of the arm or leg and guided through the artery to the neck with the help of x-rays. Once there, a contrast dye is injected through the catheter and images of the blood circulation are taken by x-ray. After that, and unless some kind of intervention is to be performed through it, the catheter is removed and pressure is applied to the area through which it has been introduced in order to prevent bleeding.

Although it is generally used as a technique for the diagnosis and monitoring of cerebrovascular disorders, the fact that a catheter is used for this purpose allows therapeutic procedures such as the administration of drugs to be used in addition to it, which may avoid the need for other treatments.

Cerebral angiography is a technique that has several variations depending on the mechanisms used to assess the condition of the patient’s blood vessels. Some of the best known are the following .

As far as digital subtraction is concerned, it refers to the fact that frequently in X-rays the skull is digitally removed from the image taken, so that the image of the blood vessels can be seen more clearly.

In this case, no catheter is inserted into the subject’s body, but it does require the injection of a contrast agent in order to obtain the CT image. It is less invasive than its conventional counterpart.

In this type of angiography, no catheter is used either, and it is not an invasive technique. It involves performing an MRI, not using radiation as in other cases.

What makes a diagnosis possible?

Cerebral angiography is a test that even today is used as one of the main tests to observe the circulatory flow and the state of the blood vessels in the brain . There are multiple disorders and diseases that the application of this technique allows us to observe.

Angiography allows us to observe the existence of extravasation and rupture of blood vessels, or the absence or obstruction of circulation in some area of the brain. This is why is a valid technique both for detecting ischemia and for visualising cerebral haemorrhages . (More information about stroke).

The use of angiography makes it possible to detect the presence of aneurysms , blood-filled bulges in the artery wall and relatively weaker walls that can rupture. (More information about aneurysms).

The existence of congenital malformations, as in the AVM, can also be assessed using this evaluation and diagnostic technique.

Cerebral angiography can be used to see if the blood vessels in the brain are healthy, if they are inflamed, or if disorders such as atherosclerosis are present.

Cerebral angiography is also used to evaluate whether or not brain death exists. Specifically, it assesses whether or not there is blood flow, with a lack of irrigation being observed in those cases of brain death.

It is possible to observe by means of cerebral angiography the presence of different disorders and diseases apart from those previously mentioned. For example, alterations can be found in neurosyphilis, or in people with disorders such as Kleine-Levine syndrome.

Risks and possible side effects of this technique

Cerebral angiography is a generally safe technique that does not tend to cause complications , but this does not prevent it from having risks and adverse side effects that may cause alterations of varying severity.

One of the risks is the possibility of allergy to the applied contrast (usually iodine). Also, it could generate discomfort or even destroy some tissues if it is misplaced outside the vein. It can also be risky or harmful for people with kidney problems or diabetes.

Finally, special caution is needed in the case of pregnant or breastfeeding women, as the radiation emitted could be harmful. It may also cause a tear in the artery that could lead to some kind of bleeding or clots that could block the vessel, although this is very rare.