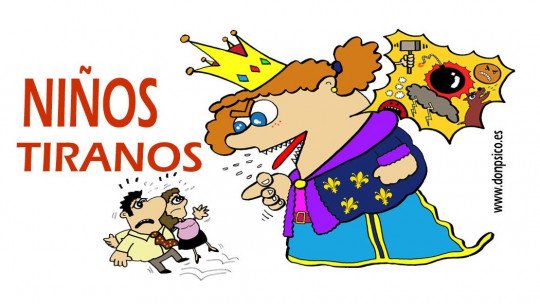 When we talk about Emperor’s Syndrome or Child Tyrant , we refer to the whole series of behaviours and attitudes of the child aimed at psychologically dominating the parents or other carers.

In the short term, such abnormal behaviour can lead to problems in the family, such as anger, frequent shouting among parents and with children, usually resulting in isolated families, where interactions with family and friends are reduced as much as possible.

In the long term, and if not detected and corrected in time, it could lead to violent adolescents . Teenagers who could use, as we have seen too often lately, physical force to control and dominate their parents and even teachers.

What are the characteristics of the child tyrant?

The first symptoms occur around age 6, with the greatest problems occurring around age 10 or 12 in both boys and girls.

Among the most relevant characteristics we can point out

You may be interested in reading this article: “10 strategies to improve your child’s self-esteem”

What has happened for a child to engage in this type of behavior?

1. Influence of the parents’ educational style

It has been passed in a generation, from a strict and somehow authoritarian education, to an education – in many cases – in which it is not very well known how to set the limits for children. Parents do not assume the role of educators since, in general, little time is spent with the children during the week and it is others (grandparents, caregivers, etc.) who assume that role.

Some parents, moreover, are afraid of frustrating their children and do not want to impose almost any rules on them by avoiding, where possible, saying “No” to anything.

Other times, there is an evident discrepancy between the same parents in how to raise the children, either because of a lack of criteria, because the parents are separated or because there is simply a lack of fluid communication within the couple. Children are growing up in a consumerist society, where the immediate and the effortless prevail. A society, in short, that rewards easy and quick success.

Children spend many hours watching television exposing themselves to a series of hedonistic and individualistic messages where values such as discipline or respect are not reflected. It is in this panorama that parents who, most of the time, feel overwhelmed by the task of raising their children should move.

“There is only happiness where there is virtue and serious effort, for life is not a game”

What can parents do for their children’s education?

To know more: “The 8 basic tips to not spoil your child”

“To educate a child is not to make him learn something he did not know, but to make him someone who did not exist”