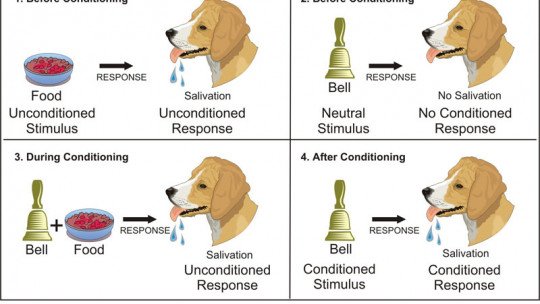 Therefore, surely all psychologists and teachers are aware of its importance in associative learning or in the formation of pathologies such as phobias. There are few who do not know Ivan Pavlov and his experiments with dogs. For those who do not yet know him, we explain his theory in detail below.

One of the most important characteristics of this type of learning is that it involves automatic or reflex responses, not voluntary behaviour (unlike Operant conditioning or instrumental) . Classical conditioning is the creation of a connection between a new stimulus and an already existing reflex. Therefore, is a type of learning according to which an originally neutral stimulus, which does not provoke a response , becomes able to provoke it thanks to the associative connection of this stimulus with the stimulus that normally provokes this response.

Classical conditioning laid the foundations of behaviorism , one of the most important schools of psychology, and was born as a consequence of the studies of Pavlov, a Russian psychologist who became interested in the physiology of digestion, especially in the salivation reflexes in dogs.

Pavlov’s research is one of the foundations of behavioural science. In his initial research, Pavlov had observed that after putting food in the mouth of the dog he was investigating, the dog began to secrete saliva from certain glands . Pavlov called this phenomenon the “salivation reflex”.

When performing the experiment repeatedly, he observed that his presence (Pavlov himself) caused the dog to start secreting saliva without having the food present, because he had learned that when Pavlov presented himself in the laboratory, he would receive food . So, in order to know if he was right, he put a separator between the dog and the food, so that the dog could not visualize it. The researcher introduced the food through a gate and recorded the salivation of the animal.

Later, Pavlov began to apply different stimuli (auditory and visual) that were then neutral, just before serving the food to the dog. His results indicated that, after several applications, the animal associated the stimuli (now conditioned stimuli) with the food. Pavlov called the salivation that followed this association “conditioned reflex.

Below you can view this video explaining Pavlov’s experiments.

Classical conditioning is also called the stimulus-response model or learning by association (E-R) . The results of his research earned Pavlov the Nobel Prize in 1904.

In the process, he designed the classical conditioning scheme from his observations:

Fascinated by Pavlov’s discoveries, John Watson proposed that the classical conditioning process could also explain learning in humans. As a classical behaviorist, thought that emotions were also learned through conditioned association , and in fact, he thought that the differences in behavior between humans were caused by the different experiences that each one lived.

For this purpose, he carried out “the experiment with little Albert”, an 11-month-old baby, together with his collaborator Rosalie Rayner, at the Johns Hopkins University (United States), because he wanted to find out if it is possible to condition an animal when it is associated with a loud noise (hammer blow on a metal board) that provokes a fear response .

The association of a hammer blow on the metal table (EI) and the presence of a white rat (EC), which was previously a neutral stimulus, ended up provoking an emotional response of fear (RC) in the presence of the rat , thus demonstrating that fear could be learned by classical conditioning. This is the most common mechanism for the acquisition of phobias. It goes without saying that this experiment could not be carried out today, since it goes beyond the limits of scientific ethics.

You can find out more about Little Albert’s experiment by entering this post:

“The 10 most disturbing psychological experiments in history”

In 1913, Watson published an article called Psychology as the behaviorist views it , and proposed to analyze psychology from the analysis of observable behavior instead of from the analysis of consciousness , a perspective that had been in force until then. To this end, he proposed the elimination of introspection as a valid method for psychology, replacing it with objective observation and experimentation.