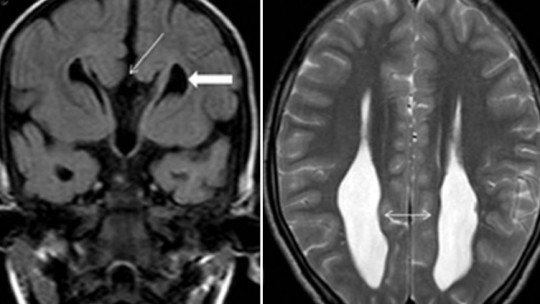 There are multiple factors that can cause defects in the formation of the brain during intrauterine development or later, such as contact with toxic substances or the inheritance of genetic mutations.

In this article we will describe the causes, symptoms and treatment of colpocephaly , a rare brain development disorder.

Colpocephaly is a congenital morphological abnormality of the brain that is characterized by a disproportionately large size of the occipital horns of the lateral ventricles , the cavities through which cerebrospinal fluid circulates, which performs functions similar to those of blood inside the skull. It may be due to various brain disorders.

The term “colpocephaly” was coined in 1946 by neurologist Paul Ivan Yakovlev and neuropathologist Richard C. Wadsworth. The words “kephalos” and “kolpos” come from Greek and can be translated as “head” and “hollow”, respectively. This disorder had been described 6 years earlier by Benda, who gave it the name “vesiculocephaly”.

The colpocephaly is part of the set of structural alterations that are known as “cephalic disorders” . By definition, this category includes all the anomalies and damages that affect the head and especially the brain, such as anencephaly, lysencephaly, macrocephaly, microcephaly and schizencephaly.

In any case, this is a very rare disorder. Although there are no precise data on the prevalence of colpocephaly, between 1940, the year it was first described, and 2013 only 50 cases had been identified in the medical literature.

It is important to distinguish colpocephaly from hydrocephaly , which consists of an accumulation of cerebrospinal fluid in the brain that causes symptoms resulting from increased cranial pressure. Cases of colpocephaly are often misdiagnosed as hydrocephalus, and treatment of this disorder may result in signs of colpocephaly.

The causes of colpocephaly are varied, although they always interfere with the development of the brain by causing the white matter (the collection of fibres formed by axons of neurons) to have a lower than normal density. This causes, as well as indicates, an altered functioning of the transmission of electrochemical impulses in the brain.

Among the most common causes of colpocephaly are the following:

The fundamental sign of colpocephaly is the disproportionate size of the occipital horns of the lateral ventricles compared to the rest of their sections. This indicates a reduction in the rate of development of the brain, or an arrest of the brain at an early stage.

Colpocephaly does not usually occur in isolation, but generally occurs along with other disorders affecting the central nervous system , especially its development. These include microcephaly, lysencephaly, agenesis, dysgenesis and lipoma of the corpus callosum, schizencephaly, cerebellar atrophy or Chiari malformations.

Nervous disorders can cause various symptoms and signs, among which cognitive deficits, motor dysfunctions, the appearance of convulsions and muscular spasms, alterations in language and visual and auditory deficits stand out. A frequently associated morphological abnormality is reduced head size (microcephaly).

However, because the severity of morphological abnormalities that cause colpocephaly differs from case to case, the disorder sometimes has no symptoms or relatively mild symptoms.

The prognosis in cases of colpocephaly can vary greatly depending on the severity of the underlying and associated brain disorders, since this abnormality is usually a sign of other disorders of greater clinical significance. The severity of most brain disorders depends on the degree to which neural development is affected.

There is no specific treatment for colpocephaly , as it is a structural disorder of the brain. Therapy, therefore, tends to be symptomatic. For example, antiepileptic drugs are prescribed to prevent seizures, and physical therapy is used to minimize muscle contractures and motor problems.

A lot of research is currently being carried out on the development of the brain and in particular on neurulation , the process of developing the neural tube, from which the nervous system is formed. It is hoped that increased knowledge about genes and relevant teratogenic factors will reduce the risk of colpocephaly in the general population.

One particularly promising line of treatment is the use of stem cells; in particular, research is being conducted into the possibility of using oligodendrocytes (a type of neuroglycemia) to enhance the synthesis of myelin, which coats neuronal axons and accelerates neuronal transmission; this could alleviate the symptoms of colpocephaly.