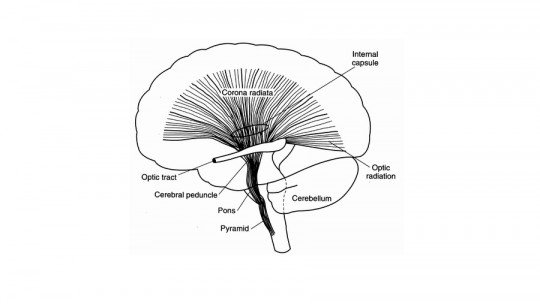 The corona radiata is a brain structure , so called because of its crown shape, formed by nerve fibers that project into the brain to form the internal capsule, a structure that connects to the cortex.

Located in both hemispheres, each radiata crown is connected to its opposite through the corpus callosum.

Below we explain in more detail what this brain structure consists of, what its characteristics, structure and functions are.

Corona radiata: what is it?

The corona radiata or radiating crown is a structure in the brain formed by nerve fibers (white matter) that make up the inner capsule , a region that connects the cerebral cortex to lower areas of the brain and spinal cord.

This region of the brain is called the corona radiata because its nerve fibers project a kind of structure reminiscent of a crown.

The corona radiata can be affected by diseases capable of affecting the white substance of the brain , such as multiple sclerosis, causing significant dysfunctions at the intellectual, social and emotional levels.

In the brain, the projection fibres are grouped together inside the internal capsule. This structure is a compact band of white substance consisting of ascending and descending nerve fibers, which connect the cerebral cortex to the brain stem and spinal cord.

The projection fibres of the internal capsule open in a fan shape forming the radiata crown. Many of these fibres establish reciprocal connections between the thalamus and the cerebral cortex .

As we have seen, the nerve fibers of the radiata crown converge to form the internal capsule. This in turn divides another structure called the striated body or striated nucleus , which receives information from the cerebral cortex and forms part of the basal ganglia.

Basal ganglia have the function of regulating and controlling movements, managing learning related to automated procedures (e.g. driving a vehicle), intervening in motivational and emotional processes, or managing activities related to planning.

The internal capsule is directly related to two of the structures that make up the basal ganglia: the caudate nucleus and the putamen . These two regions are separated by the descending fibres of the internal capsule.

The caudate nucleus participates in the modulation of movement in an indirect way; and the putamen is mainly in charge of the motor control of the body and plays a relevant role in the operating conditioning.

The radiata crown can be damaged by various causes, such as a stroke. Strokes involve small branches of blood vessels and those that affect the corona radiata , are usually called subcortical, lacunar or white matter strokes.

The reason why this region is called white matter is because it is highly myelinated, which means that it is protected by a special type of fatty tissue that isolates and helps nerve cells: myelin. They are also called subcortical strokes because they are found in the subcortical and deeper region of the brain, in contrast to cortical or more superficial regions.

People who have accidents or damage to an area such as the radiata crown have what is called cerebrovascular disease, which is characterized by the presence of narrowed blood vessels and is prone to developing blood clots in the brain.

Occasionally, strokes involving the radiata crown may be relatively small and cause no symptoms. In this case, they are called silent strokes.

On the other hand, a stroke in a region such as the radiata crown may produce non-specific symptoms, such as loss of autonomy and daily living skills , a predictor of stroke, even when there are no major signs on a brain MRI or CT scan.

In addition to stroke, there are other causes of damage to the radiata crown, such as: brain tumors, spread of cancer by metastasis, brain hemorrhage, head trauma, or brain infections.

However, there are two keys to prevention: healthy living habits and regular medical care . Not smoking, eating a healthy diet, relaxing and avoiding stressful situations or tackling medical problems such as high cholesterol or hypertension are some of the protective factors that will help us prevent diseases and strokes.