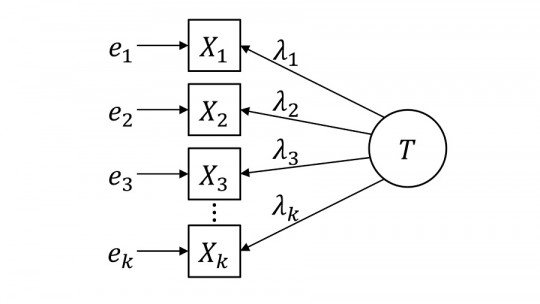 Psychometry is the discipline that measures and quantifies psychological variables of the human psyche, through a set of methods, techniques and theories. To this discipline belongs the Cronbach’s Alpha (α) , a coefficient used to measure the reliability of a measurement or test scale.

Reliability is a concept that has several definitions, although it can be roughly defined as the absence of measurement errors in a test, or as the accuracy of its measurement.

In this article we are going to know the most relevant characteristics of Cronbach’s Alfa, as well as its uses and applications, and how it is used in statistics.

Cronbach’s Alpha (represented by α) is named after Lee Joseph Cronbach, who named this coefficient in 1951 .

L.J. Cronbach was an American psychologist who became known for his work in psychometry. However, the origins of this coefficient can be found in the works of Hoyt and Guttman.

The reliability of a measuring instrument has several definitions or “subtypes”, and by extension, there are also different methods for determining them. These reliability subtypes are 3 , and in summary, these are their characteristics:

It implies that two tests are equivalent or “equal”; to calculate this type of reliability, a two-application method called parallel or equivalent forms is used, where two tests are applied simultaneously . That is, the original test (X) and the test specifically designed as equivalent (X’).

Reliability can also be understood as the stability of a measurement; to calculate it, a two-application method is also used, in this case the test-retest . It consists of applying the original test (X), and after a time lapse of type, the same test (X).

Calculation of the Reliability Coefficient

Cronbach’s Alpha is a method of calculating the reliability coefficient, which identifies reliability as an internal consistency . It is so called because it analyses to what extent partial measurements obtained with the different items are “consistent” with each other and therefore representative of the possible universe of items that could measure that construct.

When to use it?

Cronbach’s Alpha coefficient will be used to calculate reliability, except in cases where we have an expressed interest in knowing the consistency between two or more parts of a test (e.g. first half and second half; odd and even items) or when we want to know other “subtypes” of reliability (e.g. based on two-application methods such as test-retest).

On the other hand, in the case that we are working with dichotomously valued items , Kuder-Richardson’s formulas (KR -20 and KR -21) will be used. When the items have different levels of difficulty, the formula KR -20 will be used. If the difficulty index is the same, KR -21 will be used.

It should be noted that in the main statistical programs there are already options to apply this test automatically, so you do not have to know the mathematical details of its application. However, knowing its logic is useful to take into account its limitations when interpreting the results it provides.

Cronbach’s Alpha coefficient ranges from 0 to 1. The closer it is to 1, the more consistent the items will be with each other (and vice versa). On the other hand, it should be noted that the longer the test, the higher the alpha (α).

However, this test does not in itself serve to know the absolute quality of the statistical analysis carried out, nor that of the data on which it is based.