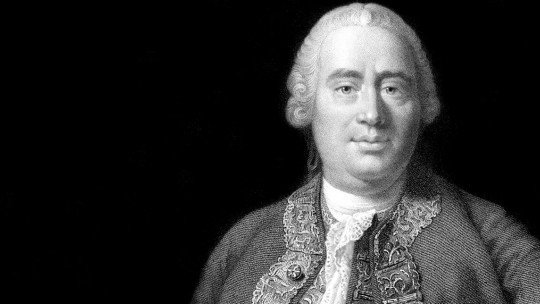 Before Psychology appeared as a science, it was the task of philosophers to investigate the way in which human beings perceive reality. Since the Renaissance, two great philosophical currents fought among themselves to answer this question; on the one hand there were the rationalists, who believed in the existence of certain universal truths with which we are already born and which allow us to interpret our surroundings, and on the other hand there were the empiricists, who denied the existence of innate knowledge and believed that we only learn through experience.

David Hume was not only one of the great representatives of the empiricist current, but he was also one of the most radical in that sense. His powerful ideas are still important today and, in fact, other philosophers of the 20th century were inspired by them. Let’s see what exactly David Hume’s empiricist theory consisted of .

Who was David Hume?

This English philosopher was born in 1711 in Edinburgh, Scotland. At the age of twelve he entered the University of Edinburgh to study, and years later, after suffering a nervous breakdown, he moved to France, where he began to develop his philosophical concerns through the writing of Treatise of Human Nature, completed in 1739. This work contains the germ of his empiricist theory.

Much later, around 1763, Hume became friends with Jean-Jacques Rousseau and began to make himself better known as a thinker and philosopher. He died in Edinburgh in 1776.

The main ideas of David Hume’s philosophy are summarized in the following basic principles.

1. Innate knowledge does not exist

We human beings come to life without prior knowledge or thought patterns that define how we should conceive reality. Everything we will get to know will be thanks to the exposure to experiences .

In this way, David Hume denied the rationalist dogma that there are truths that exist by themselves and to which we could have access in any possible context, only through reason.

Hume distinguishes between impressions, which are those thoughts that are based on things we have experienced through the senses, and ideas, which are copies of the former and their nature is more ambiguous and abstract as they do not have the limits or details of something that corresponds to a sensation originated by eyes, ears, etc.

The bad thing about ideas is that, although they correspond exactly to the truth, they tell us little or nothing about what reality is like, and in practice what matters is to know the environment in which we live: nature.

3. There are two types of statements

When explaining reality, Hume distinguishes between demonstrative and probable statements. Demonstratives, as their name suggests, are those whose validity can be demonstrated by evaluating their logical structure. For example, saying that the sum of two units is equivalent to the number two is a demonstrative statement. This implies that its truth or falsehood is evident in itself , without the need to investigate about other things that are not contained in the statement or that are not part of the semantic framework in which that statement is framed.

The probable ones, on the other hand, refer to what happens in a given time and space, and therefore it is not possible to know for sure if they are true at the time they are stated. For example: “It will rain tomorrow”.

4. We need the probable statements

Although we cannot totally trust its validity, we need to back it up with probable statements to live by, i.e. trusting more in some beliefs and less in others. Otherwise we would be doubting everything and doing nothing.

So, what are our habits and our way of life based on solid beliefs? For Hume, the principles that guide us are valuable because they are likely to reflect something that is true, not because they correspond exactly to reality.

5. The limitations of inductive thinking

For Hume, our lives are characterized by the belief that we know certain invariable characteristics about nature and everything that does not surround it. These beliefs are born from exposure to various similar experiences.

For example, we have learned that when you open the tap, two things can happen: either liquid falls or it doesn’t. However, it cannot happen that liquid comes out but, instead of falling, the jet is projected upwards, towards the sky. The latter seems obvious, but, taking into account the previous premises… what justifies the fact that it will always continue in the same way? For Hume, there is no justification. From the occurrence of many similar experiences in the past, it does not logically follow that it will always happen .

So, although there are many things about how the world works that seem obvious, for Hume these “truths” are not really obvious, and we only act as if they are for convenience or, more specifically, because they are part of our routine. First we expose ourselves to a repetition of experiences and then we assume a truth that is not really there.