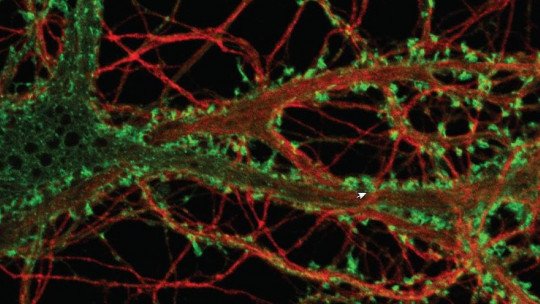 The experience of feelings of well-being and pleasure, as well as the correct functioning of systems such as the motor apparatus and cognitive functions is possible thanks to the production and release of a neurotransmitter substance known as dopamine.

Those in charge of these tasks of manufacture and transmission of this neurotransmitter so essential in human functioning are the dopaminergic neurons, of which we will speak throughout this article . In it, we will describe their main characteristics, as well as their functions and the pathways they use to travel through the nervous system.

What are dopaminergic neurons?

Dopaminergic neurons are defined as a group of brain cells that inhabit the nervous system and whose mission is to produce the neurotransmitter known as dopamine, as well as to transmit it to other cells of the nervous system.

The release of dopamine enables the activation of certain encephalic structures and areas that enable movement and motivation related functions as well as a large number of higher cognitive functions.

This release and transmission of dopamine along the various structures of the nervous system is made possible by dopaminergic pathways. These pathways consist of a series of interconnected neuron pathways through which dopamine travels.

This neurotransmitter is produced in the neuronal cytoplasm, within the soma of the neuron, to be transmitted later through the axons of the neuron , which create projections towards the different sites of synapses.

As a result, any type of injury, condition or disease that causes the degeneration of dopaminergic cells will result in the emergence of all kinds of diseases in which the person experiences a gradual worsening of brain functions. These conditions include neurodegenerative diseases such as Parkinson’s or others such as schizophrenia.

Dopamine as a product of these neurons

As mentioned above, dopamine is the neurotransmitter produced by these dopaminergic neurons. This substance belonging to the group of catecholamines is found throughout the central nervous system, specifically in the intersynaptic space of the brain.

Although this type of dopaminergic neurons can be located in a large number of structures of the nervous system, they tend to be present to a greater extent in the substantia nigra, so called because of the large amount of melatonin it contains and which gives it its characteristic colour, as in the hypothalamus.

How is dopamine transported? The dopaminergic pathways

The dopaminergic system, and therefore its neurons, are arranged in a series of pathways known as dopaminergic pathways. These are distributed along different areas of the nervous system , within which they fulfil a certain function.

Although there are eight different dopaminergic pathways, only four of them become more relevant in the development of dopaminergic functions. These four pathways are: the mesolimbic pathway, the mesocortical pathway, the nigrostriatal pathway and the tuberous-infundibular pathway.

Thanks to this pathway, dopamine travels from the ventral tegmental area to the nucleus accumbens. It is located in the midbrain, also known as the midbrain, and a malfunction of this is related to disorders such as schizophrenia.

In this second route the neurotransmitter is transported from the ventral tegmental area to the frontal cortex. Like the mesolimbic pathway, the alteration of the mesocortical pathway is also related to schizophrenia . However, it tends to have a greater impact on the cognitive processes of schizophrenia.

As its name suggests, the nigrostriatal pathway releases dopamine from the substantia nigra into the striatum and its functions are associated with motor control. An alteration in this pathway can lead to disorders such as Parkinson’s disease or different types of chorea.

The latter route moves dopamine from the hypothalamus to the pituitary gland, exerting its influence on some hormones such as prolactin . As a consequence of some alteration in its functioning, prolactin levels in the blood may increase causing a condition known as hyperprolactinemia.

What functions do these neurons perform?

At the beginning of the article it is already mentioned that dopamine, and therefore dopaminergic neurons, have an essential role in many functions of the nervous system. However, there are a number of actions or processes in which dopaminergic neurons are particularly relevant.

1. regulate the feeling of pleasure and motivation

If there is one thing that dopaminergic neurons have gained a special reputation for, it is their involvement in the processes of pleasure and motivation.

Thanks to the release of dopamine by neurons in the ventral tegmental area and in areas of the amygdala, the lateral septal area, the neocortex or lol olfactory nuclei and accumbens, the brain generates the sensations of pleasure and reward.

These neurochemical reactions occur in situations of reward or gratification such as sexual behaviors, addiction processes or in eating .

2. They mediate in cognitive processes

In this case, dopaminergic neurons located in the frontal lobes of the brain play a special role in the development and proper functioning of cognitive processes such as memory, attention and problem-solving ability .

In the frontal lobes, the release of dopamine mediates the flow of information from other areas of the nervous system. As a consequence, the injury or degeneration of these brain areas leads to the appearance of the already mentioned neurodegenerative diseases, such as Parkinson’s disease, which cause cognitive impairment in the patient, as well as motor alterations and problems.

Finally, although dopaminergic neurons are involved in many other processes, they have a special role in the correct development of movements , as well as making it possible for the person to perform all kinds of fine and controlled movements.

This explains the appearance of the motor symptoms so characteristic of Parkinson’s disease, which are due to a deficit in dopamine production from neurodegeneration.