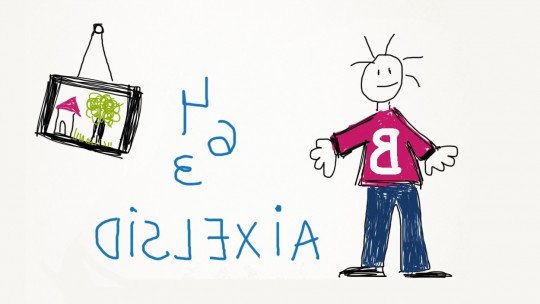 For many people reading is a hobby, a pleasant hobby that induces us to relax and imagine stories and worlds different from our own or to reflect on the different areas of life. It is also a way of learning and acquiring knowledge, capturing and giving meaning to the written symbols that we perceive through vision, the graphemes.

But reading fluently is not something that is easily achieved .A long process of learning and automation is needed so that reading can become a way of acquiring information. And not in all cases is this process done in a normative way.

In some people reading is a tremendously complicated process, making frequent mistakes that make it difficult to understand what is written.Many of these cases of people with reading difficulties suffer from a disorder of learning to read that in turn can affect academic and work performance: dyslexia .

People who have dyslexia or a learning disorder with reading difficulties have a pattern of learning with severe difficulties in recognizing words in writing. In addition, these individuals usually show little ability to spell and write , and often also have some difficulty in mathematical reasoning (dyscalculia).

The main problem of subjects with dyslexia is the precision with which they face the fact of reading, causing little precision in the reading of words.This lack of precision causes the commission of frequent errors , the most common being the presence of omissions of letters and sounds, repetitions and hesitations during reading, translations of the position of the letters within a word, insertion of new sounds, substitutions in sounds or words or the use of more frequent derivatives of the word.

In addition, dyslexia rarely occurs alone; it causes many other learning problems related especially to reading comprehension. The fact that there is a very low reading speed makes it difficult to understand the material read.

Because it is an early developmental problem, the effects of dyslexia can cause a poor adjustment to the academic and work environment . It can also lead to serious self-esteem problems that can extend throughout a lifetime. It is not uncommon for people with dyslexia to actively avoid reading, especially if reading becomes aversive because of the insistence that they read correctly.

Dyslexia is a chronic neurodevelopmental disorder, being the most common learning disorder . Although errors in reading are normal at certain ages, to be diagnosed with this disorder it is necessary that reading skills are far below what is expected in an individual of the same maturity and intelligence level. It has genetically based neurological causes and needs to be treated in order to improve the performance and adaptation capacity of the person who suffers it.

Theory of the double route

The existence of this disorder and the fact that the ability to read is an important part of our daily lives have been explored and researched from different theories. One of the most accepted is that of Morton’s model, with its theory of the two-way processing of reading information .

The first way the author refers to is the direct or lexical way through which a global reading is made , recognizing the words as a whole without needing to visualize the complete word. In this way, visual stimulation is basically used to obtain information.

The second way proposed by this theory, the phonological way, would work indirectly by needing to relate the visual stimulus with the sounds it represents and later on these sounds with their meaning. This second process requires the conversion of information from grapheme to phoneme, so the process is somewhat longer. It is used mainly when we do not know the word to be read, being new to us and having no previous reference to it.

In dyslexia one or both pathways seem not to work properly , causing the typical errors of this disorder. To better understand what happens during this disorder, we first look at the typical developmental process of reading ability.

The typical development of reading ability

As we have said, the ability to read is acquired throughout a long learning process, and in turn it affects the rest of the development as reading is fundamental in order to follow the formative process typical of formal education.

In a first phase called logographic, the child will use the basic form of the word to recognize familiar elements , without taking into account (and even without knowing) the sounds that each letter represents.

Later, around the age of five, the children begin to be aware that the letters represent concrete sounds and that these mean something, appearing the capacity to mentally convert the sounds into visual symbols and the letters into sounds. This phase is known as alphabetic, and in it children already begin to syllabicate and separate phonemes.

Finally, around the age of seven or eight , the orthographic phase is reached, in which the individual is able to analyse words from their syntax at a level that, with time and practice, will become equal to that of an adult.

However, people with dyslexia for some reason have problems somewhere in this process, not being able to fully recognize the shape of the word, transform it into sound, or both.

Dyslexia is a relatively common learning disorder, but the type of errors made can vary greatly depending on the type of reading path that is impaired. We can find several types of dyslexia and different ways of classifying them but as the model of the double reading pathway is one of the most accepted the most commonly used typologies are the following.

In this type of dyslexia people present a damage in the phonological way, being able to accede to the reading only by the visual way. In this way, the reader is unable to correctly associate the written word with its pronounced equivalent, reading only from the visual form of the word.

This is why in this type of dyslexia many mistakes are often made when reading pseudo-words (invented words), since they tend to associate words of which they know the form with others. They also often make word declensions and often fail on words with a function (e.g. prepositions).

In superficial dyslexia the reading problem is essentially the reading of irregular words. The path to damaged reading would be the lexical one, having to focus on the sounds and phonemes of the word itself in order to read.

In this case, those who suffer from this type of dyslexia have problems reading words globally , having difficulties in associating letter and sound. It is frequent that they make mistakes in words that sound the same, and a high level of slowness in reading and hesitation is common, making several attempts until they find the correct word.

Deep dyslexia can be understood by considering that both the phonological and part of the lexical pathways do not work properly. The person reads through the visual, but as this pathway is also damaged the problems are much greater, and may suffer semantic errors along with others typical of the other two types of dyslexia .

Dyslexia is a problem that affects a large number of people, and detecting and managing it correctly can be crucial in facilitating the individual’s normative development and adjustment in society.

After the diagnosis, which is carried out by means of standardized and popular procedures and assessment batteries such as TALE or PROLEC in schools and counselling and care teams, the start of treatment should be initiated as soon as possible in order to avoid complications and facilitate development.

The treatment to be carried out will depend on the patient’s skills, having to adapt the strategy to be applied according to the possibilities of each case . At first, it will be necessary to identify the most problematic areas, in order to work on them little by little and as improvements are made, introduce more complicated elements.

A fundamental part of the treatment is training in reading and writing, increasing the subject’s level of phonological awareness little by little while gradually increasing the time spent reading aloud (and if possible using attractive texts adapted for individuals with dyslexia).

It is also very useful to use multisensory methods that allow relating the information coming from the different senses , strengthening the capacity of linking vision and hearing.

It is essential that the treatment contains elements that contribute to motivate the child (or adult, if not diagnosed before) and to increase their confidence, being essential the collaboration of relatives and teachers so that reading does not become a torture. It is recommended to read to them at home so that they see reading as something enjoyable and positive. Criticism of their performance should be avoided as much as possible , since it is frequent that they end up becoming insecure and avoiding reading.