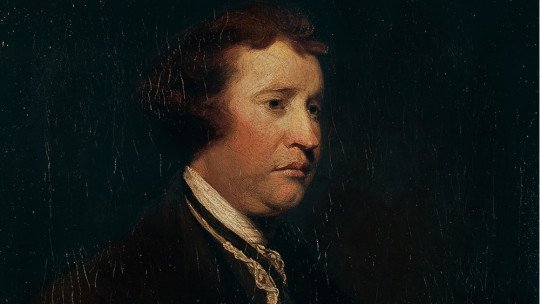 In the history of psychology, philosophy has always had a great influence, the discipline from which it emerged in the 19th century. The way in which human beings are usually understood and the personal relationships they establish, for example, depends on intuitive, pre-scientific perspectives, which have been influenced by the main thinkers of the West.

The philosopher Edmund Burke was one of these people , and his conservative approach when analyzing the logic by which society operates is still valid today. Next we will see what Edmund Burke’s philosophical theory consisted of and what implications it has.

Who was Edmund Burke?

Edmund Burke was born in Dublin in 1729, during the Enlightenment. From his youth he understood that philosophy had a spatial relevance for politics, since it helped to understand how to consider abstract themes that were manifested through the multitudes and, in addition, it established moral indications to follow, which allow proposing systems of social order.

This led him to participate in the English parliament between 1766 and 1794 . During this period he defended the right of the English colonies to become independent, and in fact took a stand against the occupation of North America. In the economic sphere, as we shall see, he was a radical defender of the free market.

The main aspects of Edmund Burke’s philosophical theory, as far as human behavior and social phenomena are concerned, are the following.

1. The noble component of society

Burke understood that human society does not only exist to enable individuals to exchange goods and services, as it might appear from a materialistic point of view. For this philosopher there is something else that gives value beyond the simple observable exchange through payment and the joint surveillance of a common space.

This “extra” is virtue, the arts and sciences, which are products of society. It is a component that ennobles human beings and, according to Burke, distinguishes them from animals.

2. The idea of the contract

Through this double exchange, both material and spiritual, human beings establish a social contract, a series of negotiated conventions as long as civilization is maintained and its fruits are enjoyed by the greatest number of people.

This virtuous component that human beings obtain through mutual support does not exist by itself. It has its origin in tradition, in the way in which each culture remains faithful to its customs , its past and the way in which they honour their ancestors. To rely on the cultural contributions that we inherit from previous generations is something that allows us to progress, according to this thinker.

This way of understanding society does not keep it separate from its origin, but understands it as a living being that develops and matures.

At the same time, Edmund Burke emphasized another element that, for him, was inherited: the original Christian sin . He thus opposed the idea that society can bring us closer to immoral acts or bring us closer to them through progress: guilt exists independently of the educational influences of the society in which we live and, in any case, the company of others helps us to manage it thanks to the fact that in community the flame of religion is kept alive.

In general, Edmund Burke was opposed to revolutions, paradigm shifts in a society . This is because he understood that each culture must develop at its “natural” pace (remember the analogy with the living being). Revolutions, by their own definition, imply going on to question many ideas rooted in the past and customs that have shaped civil and political life, and therefore result, for him, in an artificial imposition.

6. Defense of the free market

While socially Edmund Burke encouraged the active defence of traditional values and customs beyond any debate about their usefulness in concrete situations, economically he opposed socialised control. That is to say, that he defended the free circulation of capital . The reason is that this was a way of reaffirming the importance of private property, which, in the line of other philosophers of the time, he considered an extension of the body itself.

Edmund Burke believed that the human being can only be understood by taking into account his inclusion in a social network of habits, beliefs and customs with strong roots in what the ancestors did.

In this way, it emphasized the importance of the social and, at the same time, could draw a distinction between the cultural and the economic sphere, in which the logic of private property predominated.