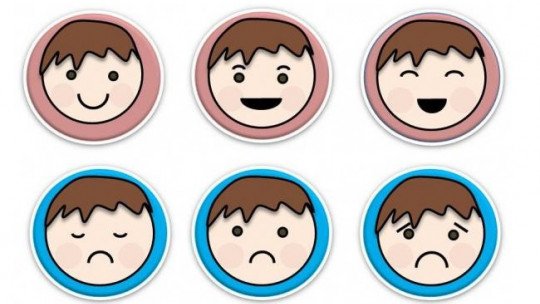 Any event, no matter how simple, arouses a wide range of emotions. This is because a large part of our brain, the Limbic System , takes care of them and makes emotions so ingrained in the nature of human beings that we can consider them part of us and our way of reacting to the world.

Each of the memories that make up our life history has an emotional charge associated with it, and that is that there is nothing that makes us feel more alive than emotions . Perhaps that is why one of its great representative icons is the figure of the heart, the organ that maintains our lives. Emotions make us bring out the best in us, but they can also bring out the worst in us, and by this I do not mean only negative emotions such as anger or fear, because even an excessive load of positive emotions such as joy can lead us to euphoria and with it, to a lack of control over our behavior.

For this reason almost none of our emotions elude the filter of consciousness . If we take into account that we continually feel, we will easily recognize that we also continuously channel or repress our feelings, so we all have a certain emotional control that we execute automatically and therefore unconsciously. But despite this control that we have, partly learned and partly written in our genetic material, all people at some point in our lives have felt altered or out of control due to our emotional experiences.

Feelings and emotions are creating a sense of urgency

We all know that feelings alter our thinking. In fact, many psychological and psychiatric disorders often arise as the result of a disproportionate emotional response that the person is unable to master. In the 1930s, psychoanalyst Franz Alexander discovered that people who suppressed their feelings had permanently high blood pressure.

The repressed emotions become overflowing, seeking to be released and produce the psychosomatisation , which consists of the expression of the psychological through physical symptoms, so that the body also becomes ill. But the key to getting along with our emotions is not in not repressing them either, because not repressing them in any way can lead to other types of disorders even more serious, and to getting into more than one mess that you may regret. In this sense, I would like to recommend that you read Bertrand Regader’s article, called “The 10 Essential Rules for Releasing Emotional Burden”, where you will learn other techniques for managing your emotions.

We can neither disconnect nor choose our emotions, but we can try to manage them through emotional control, which should not be understood as a form of repression of emotions , but as a way of regulating them, and thus be able to modify our emotional and sentimental state, when necessary. The objective of control techniques is to avoid that when a negative emotion is triggered, we are dragged along and express it in an overflowing way that we may later regret. Here are some techniques to help you control your emotions and feelings.

Although psychologists don’t like to prescribe avoidance or running away from situations (the avoidance-and-run coping style is ineffective in solving problems), in the case of controlling negative emotions, I, like many other colleagues, do, I will make an exception and explain that the first and simplest technique of emotional control is to learn to avoid what generates negative emotions , whether they are people or situations, such as trying to avoid a person who overwhelms us every time we see him, not going to an event that we know our ex-partner will attend, or if we are on a diet avoid having forbidden foods in front of us, for example.

Another of the simplest and most useful techniques to control both emotions and physiological reactions, before, during and after facing emotionally intense situations, is deep breathing. On the one hand because it oxygenates our organs and makes the brain work better, and on the other hand because it relaxes and thus manages to calm us down .

There are multiple techniques to perform it, one very well known is to perform the phases of breathing by doing a count, this count can be varied as we all have different breathing rhythms and it is not about forcing the breathing, the ideal is to find the number that best fits ours. An example of this way of doing deep breathing is the following:

In this way we will get a slow and slightly more intense breathing than our normal breathing . You can check that you are breathing correctly by putting one hand on your chest and another on your abdomen. You are doing it correctly if when you breathe only your hand moves from your abdomen (for this reason deep breathing is also called abdominal or diaphragmatic).

When we experience a negative emotion, our attention is focused on the thoughts that keep that emotion active and if we continually turn to those thoughts, we strengthen the emotions. However, if we think less about the event that brought the negative emotion to the surface, it diminishes. We see in this fact how emotion and thought are closely linked.

For Cognitive-Behavioral Psychology human psychology is expressed on three levels that are in constant interaction, as the following diagram shows: As I said earlier, emotions cannot be changed, but since emotion and thought go so closely together if we change our thinking we can regulate both our emotions and our actions. This is the fundamental principle of cognitive techniques such as those presented below.

It is already part of the popular knowledge that thinking positively makes us feel better, we can even find in the market brands that have made positive statements a form of ‘branding’ and sell us a product appealing to emotion. So if positive claims have become so popular it must be because they must work. In order to fill our mind with positive affirmations we have to empty it of negative thoughts. To do this, we must first detect which are the thoughts that generate, maintain or increase our negative emotions and make us feel sad, angry, anxious, scared, etc.

Once identified, we have to substitute them for other more positive ones, for this, although it can be done in a mental way, I recommend the annotation of each negative thought and of the thought that substitutes it. Once this has been done, we only have to put it into practice and each time the negative thought appears, change it for a positive one automatically. This seems so simple that it will reduce both our cognitive and physical anxiety.

This strategy seeks to control thought and can be used before, during or after the situation that generates the negative emotion. The idea is that when you begin to feel nervous or upset, you pay attention to the thoughts you are having, and identify the negative connotations it has for you. Once this little analysis is done, give yourself orders to look for the interruption of the thought that evokes the emotion, like: ” STOP! “, “Stop!”, “Now!”, “Stop!”. After this self-instruction he replaces the thoughts detected as negative by positive affirmations .

The only difficulty with this simple technique is that identifying the thoughts that evoke negative emotions and turning them into positive ones takes a little practice.

Sometimes when a person knows that he has to do something for which he is not sure of himself, such as speaking in public or taking some kind of test, for example an exam, we anticipate the anxiety of the moment and set it up in the present moment, which causes the anxiety before the act to be greater and greater, since with negative thoughts they are negatively reinforced and one enters into an ascending spiral.

To prepare ourselves to face these situations and to fight the anxiety they generate in us, the technique of mental rehearsal is ideal, apart from being simple. It consists of visualizing that the feared situation is developing without problems, and you feel safe and relaxed because you are satisfied with your way of acting. You can also repeat to yourself slogans like: I am doing well, I am relaxed, the audience likes it… this will reinforce the technique. Plan your performance of the act and practice it mentally in a repetitive way. With each mental rehearsal the anxiety level will be reduced and this feeling will give you more confidence to overcome the situation successfully.

People tend to make two big mistakes that can affect our emotional balance. On the one hand, we are self-centered and consider our point of view to be the only correct or valid one, and on the other hand, we give others intentionalities that may not be correct. This can lead us to arguments or feel bad for no reason. That is why trying to change our perspective on people or facts can be helpful. There are several ways in which we can change our perspective and adopt a different one.

The first one I recommend is to widen the focus of the situation , because the closer we are to something, the less we see. To do this, we can move away from the situation literally or mentally, trying to see the situation as a whole and analyse the situation again from this perspective. Another way to change perspective is to put oneself in the other’s place , and think about what that person may be feeling or what circumstances may be motivating his/her behaviour.

In this way, from empathy, we are likely to acquire more tolerant attitudes towards that person and reduce our negative feelings towards him. If, for example, you are in a restaurant and you are starting to get angry because the waiter doesn’t attend you, think about how busy he is or how something went wrong in the kitchen, how overwhelmed he must feel at that moment, and this will surely help you to feel more relaxed and have more patience.

The techniques that I have presented in this paper, despite being simple, have proven to be effective in clinical practice, and therefore few psychotherapists refuse them in their daily professional practice, but like most things in life to make it a skill of ours they need to be practiced. If you manage to incorporate them into your repertoire of behaviours it is very likely that you will achieve greater control of the emotions and feelings that arise in your daily life.