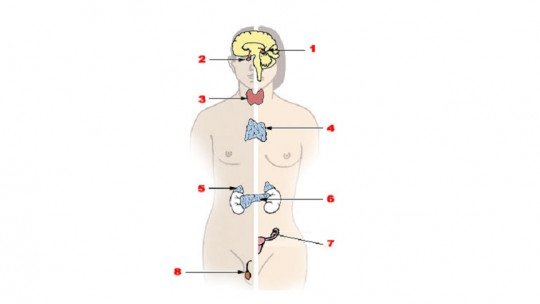 Some people say that human behavior is another aspect of our biological design, of that which causes us to be born and develop as we do. In a sense, this is true: all our mental activity is, in essence, the product of a set of nerve cells that capture information from the senses, process it, and send commands to the muscles.

However, the nervous system is not the only component that allows us to relate to our surroundings (and others) as we do. The endocrine system is also involved in this , through its mechanisms of emission and uptake of hormones. In the following lines we will see what the endocrine system is, what its parts are, and what function it has in the body.

What is the endocrine system?

The nervous system is a network of organs and cells that have evolved to produce rapid changes in the state of a living being, depending on the situation, maximizing the chances of a useful option or reflex appearing in that context.

However, sometimes there is a need for such changes to be more sustained and to affect not only the parts of the body involved in a particular action (e.g. the arm), but many target organs, at about the same time. That is why the nervous system is complemented by what is known as the endocrine system .

The endocrine system is, in short, a collection of organs and cellular tissues that secrete types of substances called hormones, which travel through the bloodstream and serve to regulate different biological processes.

Difference between the functioning of hormones and neurons

Unlike what happens with neuronal activity, the effects that the endocrine system exerts on the body are not usually immediate and take longer to fade, since several seconds pass from the time “the order” is given to release hormones until they reach their destination.

Furthermore, another difference between the endocrine system and the nervous system is that if in the former the order transmitted in an electrochemical way can reach a specific place in the body, the hormones are never predestined to reach a specific place at a specific time, but when they are released into the blood, they flood many parts of the body almost at once , reaching some of these particles in their target organ as a matter of pure probability.

On the other hand, a single release of hormones has sustained effects on several parts of the body at once. This is not a coincidence, because if something characterizes the endocrine system is that through its regulation of hormone levels usually get a balance (homeostasis) between different parts of the body, all of them adapting to the same situation, but each in its own way.

For example, in a dangerous situation, adrenaline is secreted in greater quantities by the endocrine system, making both the heart beat faster (to react quickly) and the capillaries near the skin constrict, possibly so that little blood is lost in the event of injury.

The fact that the work of the hormones and the neurons go so hand in hand has meant that we can even speak of a neuroendocrine system : the nervous system takes care of the work in the very short term (thousandths of a second), and the endocrine system achieves effects that take a little longer to arrive but which last longer and are consistent with the work of the nerve cells.

Among the endocrine organs and the parts of the body in general that are involved in the endocrine system , the following components stand out.

Located in the lower part of the brain, the pineal gland or epiphysis acts as a bridge between the nervous system and the endocrine system. Among the hormones it secretes, melatonin stands out, which is involved in the regulation of sleep-wake rhythm.

It fulfills many functions, and among them is the regulation of several biological processes linked to reproduction and sexuality. For example, it allows the ability to lactate to appear, as well as the maturation of eggs and the creation of sperm. Its role in growth is also very important, since it secretes growth hormone.

These glands are located on each of the two kidneys of the human body, and their role in the endocrine system is linked to the regulation of states of stress , mainly those related to fighting or running away behaviour. For example, they can increase blood volume, stimulate the energy available for immediate expenditure and inhibit biological processes with long-term objectives, such as the inflammatory response.

The hypothalamus is one of the most important parts of the brain, and it initiates several mechanisms for the release of many different types of hormones from various glands by picking up nerve signals. To do this, secretes hormones from the corticosteroid and catecholamine groups .

The thyroid is a large gland located in the neck. It secretes calcitonin, triiodothyronine and thyroxine , hormones that intervene in the regulation of matabolism and oxygen consumption, as well as in the generation and regeneration of bones.