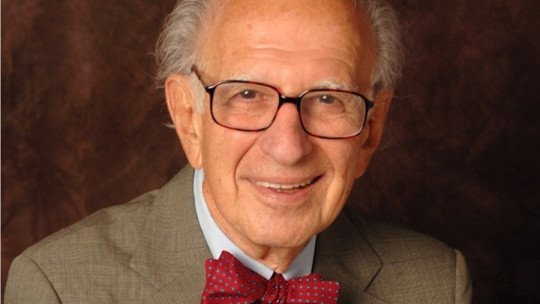 Erik Kandel (1929-) is an Austrian neuroscientist based in the United States, whose studies have been fundamental to the molecular understanding of cognitive processes. For this same work, he received the Nobel Prize in Medicine and Physiology in 2000, specifically after investigating learning and memory and their synaptic correlation.

In this article we will see a biography of Eric Kandel , as well as some elements of his academic career and his main theoretical proposals.

Eric Kandel: biography of a learning and memory neurologist

Eric Kandel was born in Vienna on 7 November 1929. Together with his mother, Charlotte Zimela, and his father, Hermann Kandel, young Eric left Austria in 1938, after Germany was annexed to the country in the same year. In 1939, and under the same context, Eric Kandel, Ludwig (his older brother), and later his parents, moved to Brooklyn, New York, where some of his relatives already lived.

Once established in this city, Eric Kandel began his academic training at Yeshiva in Flatbush and later at Erasmus Hall High School. Years later he joined Harvard University , where he studied a degree in history and literature. Specifically he was researching the attitudes of National Socialism in different German writers.

In this context, Kandel came across the dominant theories of European and North American psychology, an issue that soon led Kandel to redirect his studies. It was the paradigm of . B. F. Skinner who dominated the studies on learning and memory . Nevertheless, Kandel did not agree with defending the strict separation between psychology (the unobservable) and behavior (the observable), which was at the base of the behaviorist psychologist’s proposals.

At the same time but in the opposite direction was another Austrian neurologist, Sigmund Freud, who had studied at the beginning of his career the neurological root of conflicts and psychic activity , according to Freudian-rooted psychoanalysis. Influenced also by Ana Kris, who had also emigrated from Vienna together with her psychoanalyst parents, Erik Kandel became significantly interested in studying psychology from this paradigm.

First studies in psychoanalysis and the neurophysiology laboratory

The easiest way to professionalize as a psychoanalyst at this time was to study physics and later psychiatry. So Kandel signed up for a chemistry course and later joined the NYU Medical School. After receiving this training, and in the course of his preparation as a psychiatrist and psychoanalyst, Erik Kandel became very interested in understanding the biological basis of the mind .

This led him to collaborate with Wade Marshall, who was one of the most recognized young scientists in brain studies in the United States. Along with other neurologists, Marshall had systematized the first paradigm of neural representation in the brain of a sensory system. These studies meant the first significant proposal about the existence of topographic and systematic maps on the sensory surface of touch, vision and hearing .

In this context, for Eric Kandel it was not only interesting to investigate problems in psychiatry and psychoanalysis in biological terms, but also to find the cellular and molecular mechanisms of complex processes such as learning and memory.

The biology of memory

During his career, Eric Kandel has studied the cellular structure of the hippocampus and, from there, has proposed theories on the biology of memory. Not only that, but together with the work of Arvid Carlsson and Paul Greengard, who have explained the mechanism of action of dopamine and other neurotransmitters, Erik Kandel has proposed molecular action systems of learning and memory.

These studies earned these three researchers the Nobel Prize for Medicine and Physiology in 2000. In addition, these studies have had a significant impact on the explanations of brain activity in various disorders such as Parkinson’s, Alzheimer’s, depression, schizophrenia, among others. This is one of the most important contributions of the 20th century, a time when neuroscience and the study of synapses have been of special relevance.

Kandel’s studies have been carried out with different animal species, both vertebrates and invertebrates, and their results have been applied to the understanding of human beings. Kandel suggests that memory is located in the synapses , which means that changes in the function of these synapses are decisive in the consolidation, loss and structuring of memory, and consequently in learning. Specifically through this, long-term synaptic alterations have been studied as well as possible strategies to reverse them.

Eric Kandel is currently a Howard Hughes Medical Institute principal investigator, is a member of the Scientific Board of the Foundation for Behavioral and Brain Research, and has served as chair of the Department of Neuroscience at Columbia University.