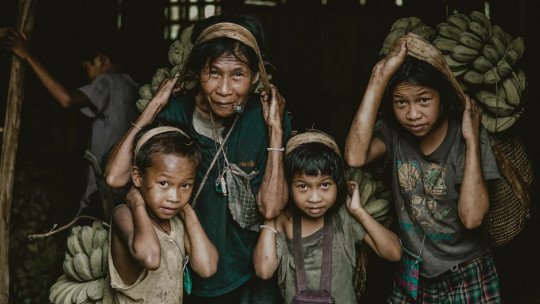 It is clear that we are not the same at birth, at five years old, at fifteen, at thirty or at eighty. From the moment we are conceived until we die, we are in a continuous process of change: throughout our lives, we will evolve and develop as individuals, and we will gradually acquire different capacities and abilities as our organism matures both on a biological level and through experience and learning.

It is a process of development that does not end until the moment of death, and has been studied by different disciplines. One of them is evolutionary psychology , about which we are going to talk in this article.

Evolutionary psychology is considered the branch of psychology that has as its object of study the development of the human being throughout his entire life cycle . It is a discipline that is born of the interest in understanding the multiple changes that manifest the mind and the behaviour of a being in continuous development from birth to the grave.

Although studies of developmental psychology have traditionally focused mainly on child development, it is very important to emphasize the fact that this discipline covers the entire life cycle: adolescence, maturity and old age are also studied and very relevant despite having received a lower level of attention (with the adult stage being perhaps the least researched of all in this regard).

This discipline emphasizes the processes of change through which the subject passes throughout his life, taking into account the presence of distinctive and individual elements that make us unique but similar in terms of the development process in question. It also takes into account that in such development we will find both biological and environmental factors . The socio-cultural environment, the degree of biological maturity and the interaction of the organism with the world are valued.

Physical, socio-affective, communicative and cognitive development are some of the main elements that from this branch of psychology are analyzed and of which evolution is valued, having some models or paradigms different theories and focusing more or less on concrete aspects. The evolutionary psychology allows us to value the point of view and the knowledge of each subject from how someone with a certain level of development perceives the world. The usefulness of this is wide, since thanks to the understanding of these factors we can adjust education, jobs or services offered to different sectors of the population taking into account their needs.

The beginnings of this branch of psychology

Although one of its most representative authors is Jean Piaget, this discipline has multiple precursors to take into account. The first scientific records of developmental milestones date back to the 17th century, with the appearance of the first diaries or biographies of babies in which sensory, motor, cognitive and language behaviour was observed (Tiedemann). Darwin would also make observations regarding the evolving behaviour of children, making his own baby biography and recording his child’s progress.

The first properly scientific study of child development was that of Preyer, who developed standards of scientific observation to record the behaviour of children and animals and published “The Soul of the Child” in 1882.

The institutional establishment of education as something obligatory in childhood led to a great deal of deepening in the psyche and in the processes of development. At this stage, Binet would develop the first intelligence test dedicated to the child population. Likewise, authors such as Montessori emerged who would contribute to the elaboration of alternative educational systems beyond the one used up to that moment. Stanley Hall is also an essential precursor figure, and it is due to him that the study of the adolescent subject was introduced into evolutionary psychology.

Likewise, currents such as psychoanalysis would be born that would begin to give importance to children’s experiences and development as an explanation of adult behaviour. Freud himself would elaborate a series of phases of psychosexual development that would contemplate different changes linked to his theory, as well as Anna Freud and Melanie Klein would stand out in the field of child development as the main exponents of this current.

Some of the theories and models proposed from this current

Throughout its history, evolutionary psychology has generated a large number of theories and models. Winnicott, Spitz, Wallon, Anna Freud, Mahler, Watson, Bandura, Case, Fischer, Newgarten… all of them are names of relevant authors and authors in the evolution of this discipline. Some of the best known and classic ones, however, are listed below.

Although Freud’s conception of child development is not particularly popular today and is not usually among the most accepted explanatory models, it is true that Freud’s contribution is one of the oldest and best known models in psychology on record. Freud considered that personality was structured by three instances, the Ego or drive part, the Overself or critical, censorial and moral part and the Self or element that integrates the information of both and configures the rational and conscious way of acting based on the principle of reality. The baby would not have an Ego during birth , being pure it, and forming the first one as the subject evolves and differentiates from the environment.

Among many other contributions, we also highlight the monitoring of a development sequence in the form of phases, in which it is possible to suffer regressions or blockages that prevent the subject from advancing properly in his development and generate fixations. We are talking about phases that Freud links to sexual development, calling them stages of psychosexual development and receiving a name according to the main focus of the search for gratification and conflict resolution in the poles of satisfaction-frustration, authority-rebetween and oedipal conflict.

Another psychodynamic author of great importance in the study of child development was Melanie Klein, who considered that human beings are motivated by establishing relationships with others .

This author, who would develop the study of the child from symbolic play and the theory of object relations, considered that the self existed from birth and that the human being went through two fundamental stages in the first year of life: a schizophrenic position (in which the subject does not differentiate between people as a whole but rather splits between good and bad parts as if they were differentiated elements) and a depressive position (in which there is recognition of objects and people as a whole, with guilt appearing when he understands that what he previously considered to be a good and bad object are part of the same object).

Perhaps one of the most far-reaching psychoanalytic contributions, in the sense that it encompasses not only childhood but the entire life cycle, is that of Eriksson. This author, a disciple of Anna Freud, considered that society and culture had a much more relevant role in the configuration of the personality throughout life. He identified a series of stages based on the existence of crises (since the human being has to face the search for the satisfaction of his own needs and environmental demands) during psychosocial development.

During the first year of life the baby has to face the crisis of basic Trust vs. Mistrust, learning or not to trust others and the world. The second phase is that of Autonomy vs. Shame, between the first and third year of life, in which the child must try to seek his independence and autonomy in the basic skills .

Then the subject will have to face the crisis of Initiative vs. Guilt, seeking a balance between having initiative of one’s own and accepting the responsibility of not imposing oneself on others. The fourth stage (6-12 years) is that of Laboriousness vs. Inferiority, in which social skills are learned. Later, between the ages of twelve and twenty, the subject would reach the crisis of Identity vs. Confusion of roles (in which one seeks one’s own identity).

From there, at approximately forty years of age, the crisis of Intimacy vs. Isolation would arise as the stage in which we seek to generate strong bonds of love and commitment with friends and couples. The seventh crisis or stage occurs between the ages of forty and sixty-five, being the one of Generativity vs. Stagnation in which the aim is to be productive in order to provide well-being for future generations. Finally, during old age we reach the phase of Integrity vs. Despair, as a moment when we look back and value life as something significant or disappointing .

Perhaps the best known and accepted model of evolutionary psychology is that of Jean Piaget, who some authors consider the true father of the discipline. This author’s theory tries to explain how human cognition evolves and adapts throughout development.

The developing subject generates different structures and mental schemes that allow him to explain the world from his own action on it (being the action and interaction of the subject with the environment necessary for development to take place). The minor acts on the basis of two main functions: organization (understood as the tendency to elaborate progressively more complex mental structures) and adaptation (which in turn may arise as the assimilation of new information as something added to what is already known or the accommodation of pre-existing schemes to this if it is necessary to change them to adapt to the new information).

This theory assumes that more and more complex capacities and thought patterns , which have been passed on in subjects through different stages or periods of development , are emerging throughout development. For this author, the biological/organic prevails over the social, depending on and following learning to development.

The author identifies the sensory-motor period (in which the merely reflex patterns of interaction last until approximately two years of age), the preoperative period (in which he begins to learn to use symbols and abstractions between the ages of two and six), the period of concrete operations (between the ages of seven and eleven, in which the capacity to perform different mental operations and solve logical problems appears) and the formal operations period (in which a hypothetical-deductive thought and a capacity for complete abstraction, typical of adults, already occurs from approximately twelve or fifteen years of age).

Another of the great authors of evolutionary psychology, Vygotsky considered that it was learning that made us develop. Cognitive growth is learned from interaction, not the other way around. The most relevant concept of this author is that of the Zone of Proximal Development, which marks the difference between what the subject is capable of doing for himself and what he can achieve with the existence of external help, in such a way that through the granting of aid we can contribute to the development and optimization of the subject’s abilities .

Culture and society largely mark the development of the child, through processes of internalization of external information obtained through action. The child first learns interpersonally, and then learns intrapersonally.

This author’s model describes and analyzes the importance of the different ecological systems in which the minor moves in order to evaluate its development and performance.

Microsystems (each of the systems and environments in which children participate directly, such as families and schools), mesosystems (relationships between the components of microsystems), exosystems (the set of elements that influence children without their direct participation) and macrosystems (the cultural context) are, together with the chronosystems (events and changes that can occur over time), the aspects that this author most values on a structural level.