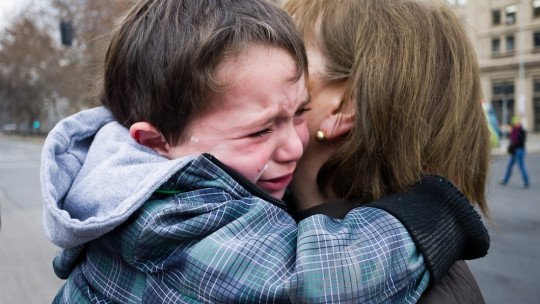 Family disintegration is a phenomenon that has been especially studied since the 80’s; a time when an important transformation of the social organization of the family occurs.

It is a complex process that is usually analyzed from the negative psychological effects it can have on the children. However, it is also a phenomenon that provides a lot of information about the values that organize our societies and about the changes that have occurred in them.

Following the above we will see what family disintegration is , what some of its psychological effects are and how the organization of families has been transformed in the last decades.

What is family disintegration?

The family, understood as the intermediate social unit between the individual and the community (Ortiz, Louro, Jiménez, et al, 1999) is one of the protagonists in our cultural organization. Its function has been traditionally understood in terms of the satisfaction of economic, educational, filial and cultural needs; through which values, beliefs, knowledge, criteria, roles are created , etc.

This occurs through an interactive and systematic relational dynamic between the members of a family (Herrera, 1997), that is, between people who share some form of kinship. In this sense, “family disintegration” is the process by which the previously established organization of a related group of people is significantly modified .

But does every change in the organization of the family imply a disintegration? We could quickly answer in the negative: not every readjustment in the organization of a family implies its separation. For family disintegration to occur, the kinship or relational dynamics that bind its members together must be qualitatively modified. Often, the latter is considered as caused by the absence of one of the parents or carers ; which among other things means that the traditional family model has been considered as a unit of analysis.

Family modification or separation is not necessarily negative; that is, in many cases it is an agreement or a situation that ensures the physical or psychological well-being of the members.

In other words, the readjustment or disruption of a previously established family organisation may be the solution to conflicting situations within the family , and as such, may have positive effects on its members. Depending on the family dynamic, it may be that its disintegration has more positive effects than its maintenance.

However, the concept of “family disintegration” usually refers specifically to the conflictive process of separation or modification, which as such, generates negative effects for one or all of the parties involved.

Traditionally, any family member who did not follow the traditional model was considered dysfunctional or disintegrated. Today, this coexists with the recognition of single-parent families and families structured on the basis of a diversity of sexual identities (Bárcenas-Barajas, 2010), which among other things makes it possible to rearrange the social organization of the family at the structural level.

Studies on its psychological effects

In the medium and long term, and at the psychological level, these studies have proposed, for example, that family disintegration has the effect of low self-esteem, feelings and behaviours of defencelessness, as well as difficulties in establishing sex-affective bonds (Portillo and Torres, 2007; Herrera, 1997). Similarly, social behavior and its relationship with family disintegration has been investigated, for example, in the increase of violent behavior or excessive withdrawal .

In the short term and especially in early childhood, it has been seen that family disintegration (when presented as an unforeseen event and a significant change in the daily structure) can cause confusion, anguish, guilt, anger or self-destructive behavior .

In any case, it is important to note that although studies have found relationships between variables (for example, between a low self-esteem score and an experience of family disintegration in childhood), this does not necessarily imply causality: low self-esteem can be caused by many other variables.

In fact, recent studies contradict traditional hypotheses and suggest that the relationship between family disintegration and low self-esteem is not always proven (Portillo and Torres, 2007). The latter leads us to consider that not all people react in the same way, just as not all families and not all adults manage a process of disintegration in the same way or with the same resources.

The causes that have been traditionally studied and established as determining factors in family disintegration are the following:

For example, the absence of care or primary caregivers is in many cases a consequence of socio-economic conditions that do not allow domestic and provision demands to be met at the same time. In other cases, it may be due to the inequitable sharing or reallocation of care or provision responsibilities within the family.

In this context a divorce is the legal dissolution of a marriage. As such, it implies significant changes in the family dynamics that sustain a couple, with and without children . In turn, divorce can have many causes. For example, the breakdown of the fidelity contract of the marriage, domestic and intra-family violence, frequent disagreements among the people involved, among others.

On many occasions the separation or disintegration of a family is a consequence of the migratory processes that lead one or both caregivers to move from the city of settlement to another where they can aspire to improve their quality of life. Likewise the deportation processes that are taking place in many industrialized societies have generated the same effect.