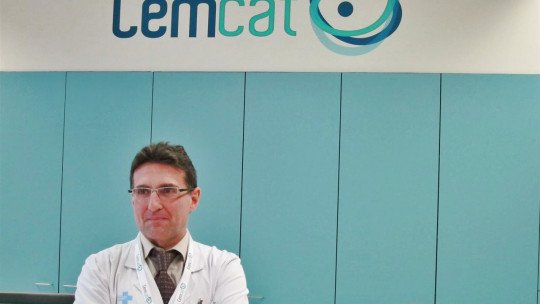 The company Genentech , belonging to the Roche Group , announced on September 27 that the Phase III clinical trial of the experimental drug Ocrelizumab has been successful.

This medication is able to delay the progression of early stage primary progressive multiple sclerosis (PMMS) by at least 12 weeks. This subtype of multiple sclerosis (MS), which affects approximately 10 or 15% of the population with this disease, is a very aggressive pathology. Until now, it had no cure or treatment, but this multicenter study (at an international level) with Spanish participation, has evidenced the effectiveness of this drug that could become the first and only therapeutic option for patients with this disease.

Until now there was no treatment for MME

The study of this drug is called Oratorio and has been led by the head of the Clinical Neuroimmunology Service at Hospital Vall d&amp;apos;Hebron and director of the Multiple Sclerosis Center of Catalonia (Cemcat), Xavier Montalbán. This study investigated the efficacy of the drug Ocrelizumab in 732 patients with primary progressive multiple sclerosis and the main conclusion is that it manages to stop, at least 12 weeks, the progression of the disability that causes the disease .

Montalbán wanted to celebrate the discovery and declared:

It’s a truly historic moment. It is so insofar as it is the first time that a drug has been proven to be effective in controlling this type of neurological disease. It opens a window towards a better understanding and treatment of multiple sclerosis.

This drug is a monoclonal antibody designed to selectively attack CD20B+ cells that are believed to play a key role in destroying myelin and nerves, which causes the symptoms of multiple sclerosis. By binding to the surface of these proteins, Ocrelizumab helps preserve the most important functions of the immune system.

What is Multiple Sclerosis?

Multiple sclerosis (MS) is a neuroinflammatory disease that affects the central nervous system (CNS), both the brain and the spinal cord . It is not known exactly what causes MS, but it damages myelin, a substance that forms the membrane that surrounds nerve fibres (axons), and facilitates the conduction of electrical impulses between them.

Myelin is destroyed in multiple areas, sometimes leaving scars (sclerosis). These injured areas are also known as demyelination plaques. When the myelin substance is destroyed, the ability of the nerves to conduct electrical impulses to and from the brain is disrupted, and this causes symptoms such as

Multiple sclerosis affects more women than men . Its onset usually occurs between the ages of 20 and 40, although cases have also been reported in children and the elderly. Generally, the disease is mild, but in more severe cases some people lose the ability to write, speak or walk.

In most cases this disease progresses in outbreaks, but in primary progressive multiple sclerosis, the disability is continuously and slowly worsened over months or years, so it is considered a serious form of this pathology.

In order for a drug to be put on the market it has to follow a process to evaluate its efficacy and safety, thus avoiding putting the lives of the people who are going to consume it at risk. The development of a new drug is long and difficult, since only two or three out of 10,000 pharmacological substances are marketed .

When the drug has been sufficiently evaluated in in vitro models and animal studies (pre-clinical phase), human research begins, which is called clinical trials. Classically, the clinical development period of a pharmaceutical product is divided into 4 consecutive phases, but they can overlap. These are the phases that are part of the clinical trial:

Following the positive results of the Phase III clinical trial of Ocrelizumab, , a European authorisation will be requested at the beginning of next year in order to be able to market this medicine . This usually takes about six months. From then on, each country will decide whether to allow the sale on its territory.