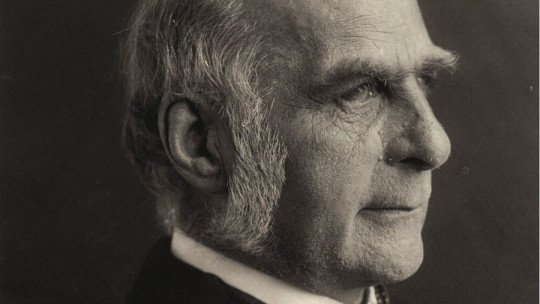 If we talk about extremely relevant characters for the development of psychology, it is likely that a large number of possible names will emerge from multiple disciplines, among them Wilhelm Wundt, Brentano, Freud, William James or Beck. Generally, we think of figures famous for the development of theoretical content about the mind or different aspects of the psyche.

However, equally important are those that fostered the development of methods and elements, or that directly initiated, the possibility of operationalizing and being able to measure something as abstract as mental capacities. One of the best known and most important in this sense was Francis Galton, whose biography we will now look at .

Francis Galton was born in the English city of Birmingham, on February 16, 1822, as the seventh and youngest child of the banker Samuel Tertius Galton and Frances Anne Violetta Darwin (Charles Darwin’s aunt, so Francis Galton and Darwin were cousins).

From a wealthy family that was socially recognized in both branches (his grandfather was also a renowned physicist, Erasmus Darwin), young Galton would grow up in an intellectual environment capable of providing him with a quality formal education. Already from his childhood he showed himself to be intellectually precocious , being able to read in English from the age of two and having knowledge in mathematics relatively advanced at the age of five. The latter would become a subject of great interest to young Galton.

His education during the first years of life was spent in schools in Birmingham until 1836, when he would enter King Edward’s School. However, he would leave that school at the age of sixteen. Shortly thereafter, he entered medical school (largely at his parents’ insistence) at Birmingham General Hospital, and then studied mathematics at King’s College, University of London.

Also, after a trip to different European cities and capitals, in 1840 he would resume his medical studies at Trinity College of the University of Cambridge. Unfortunately, in 1844 Galton’s father died, an event that would bring him great pain. And would finish his medical studies in the same year, graduating .

Travel and evolution as a researcher

Having finished his medical degree and not having to depend on his health profession due to the inheritance he received, Galton decided to make several exploratory trips around Africa , including Egypt and Sudan, joining the Royal Geographical Society.

Also during these trips he would document himself to carry out books based on his experiences that would be published from 1850 onwards and that would be considered best sellers (making contributions and discoveries in the process). He also trained in geography and meteorology, and later published (in 1863) the pioneering book in which he coined the term anticyclone and which in fact gave rise to scientific meteorology, Metereographica.

In 1853 he would meet and later marry Louisa Jane Butler , a relationship that would last a lifetime. However, the couple would not be able to have children, something that meant a great life crisis that the author attributed to a possible sterility. This last event, together with the existence of conflicts with the Royal Geographical Society and the appearance of his cousin Charles Darwin’s book, The Origin of Species , would end up triggering Galton’s desire to study biology.

One of Galton’s best-known contributions to the world of biology, derived both from his previous experiences and from reading his cousin’s book, was his attempt to study how natural selection could improve humanity .

I would begin to think that intelligence and cognitive abilities, as well as possible alterations and illnesses, could be elements of heredity, as well as the possibility of seeking an application of the principles of natural selection to favour the evolution of the species.

It would thus give rise to the beginnings of eugenics, considering how, as with animals, human beings could cross breed to promote what were considered the best characteristics. The term eugenics itself was coined in 1883 , in his publication Human Faculty .

Studies of heritability and individual differences

He would also explore the differences between inherited and learned, linking them in such a way that he considered that the union of both was linked to both physical and psychic faculties.

Galton was also the first to quantify the idea of standard variation, regression line and normal distribution. He would even be a pioneer in developing the concept of correlation, although it would be his disciple Pearson who would end up generating the much used today Pearson’s correlation coefficient .

He would also be one of the first to investigate intelligence and the measurement of its heritability. Studying the distribution of intelligence and other traits in the population, he would reach the conclusion that these tend to have a normal distribution in the population, with the majority having similar abilities and close to the average and a few having extreme values. It is also the father of biostatistics, as well as one of the precursors of differential psychology.

In 1901 he founded with Pearson and Weldon the magazine Biometrika . In 1904 he presented his theories on eugenics at the Sociological Society, and his speech was later published in the American Journal of Sociology and he founded the Galton Laboratory. Three years later the Eugenics Education Society was founded.

Also studied the heritability of the features considered most relevant through research with twins , in order to assess whether intelligence and other psychic features were inherited or were the product of education (studying, for example, whether the fact that the most powerful ones stood out was more due to the possibility of receiving a formal education or to the transmission of these abilities.

In this sense I would employ studies with monozygotic twins, coming to the conclusion that the innate seems to have a greater effect on intelligence than the learned.

Francis Galton’s contributions in the field of science are enormous, even receiving the title of Sir in 1909. However, over time he would contract tuberculosis, a disease that would end his life on January 17, 1911, in Surrey.

The legacy of this controversial and prolific author is extensive . Being the father of psychometry, his studies have allowed over time the development of mechanisms to operate and measure mental operations, something that in turn is linked to the development of psychology and psychiatry.

Also the study of the he inheritance of psychic abilities and individual differences are partly possible thanks to his contributions.

Unfortunately, not all of his studies have been employed in a positive way, his original purpose being self-servingly distorted: some studies on eugenics have unfortunately been used in a negative way for years to defend racist ideologies such as those of the Nazis.