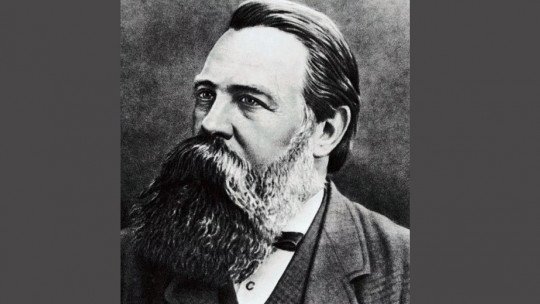 Friedrich Engels (1820-1895) was the German philosopher and politician who founded modern communism together with Karl Marx. Some authors believe that the key to understanding the thought of Friedrich Engels is precisely his biography, because it was his youthful development that marked much of his work.

Next we will make a brief review of the biography of Friedrich Engels , and we point out some of his main works and contributions to the philosophical, political and economic thought of the 20th century.

Friedrich Engels, biography of a revolutionary

Friedrich Engels was born on November 28, 1820. He was the eldest of eight siblings and belonged to a family that owned mills in Barmen, a northern part of Prussia that is now part of Germany, and which had significant industrial development at that time.

Son of a textile manufacturer, Engels soon became concerned about the general conditions of the manufacturing industries and the situation of the working class . During his adulthood he worked within this sector, which inspired him to start writing some of his main works.

Although he had been brought up in a Protestant family, Engels came closer to atheistic beliefs. The latter caused him some conflicts with his parents and especially with his mother.

The same thing happened when he had to leave school and his father sent him to work as a clerk in a commercial house. Both his mother and father expected him to develop a business career, just as they had done. However, Engels was already developing some activities that were considered revolutionary and inciting to collective organization , which disappointed his parents again.

In 1844 he met Karl Marx in Paris, just before settling in England after some failures of the revolutions of the same decade. In fact, during his stay in England, Engels worked for the textile industry where his father was a shareholder . The latter considered that perhaps if Engels worked in that industry, this would serve to appease the radical teachings he had received at school.

Engels continued to work with Marx many years later , even helping him to finance the first volume of his main work: The Capital (Das Kapital), in 1867, and provided him with a livelihood, since Marx had serious difficulties in living autonomously because of the beto imposed on him by the large families with power over the economy and politics.

Most important work and intellectual contributions

There is much debate about Engels’ relationship to pre-1850 Hegelian philosophy , as well as his relationship to his working class capitalist family. He even signed some of his works under the pseudonym of Friedrich Oswald, to avoid connecting his Protestant and business family with the provocation of his writings.

Among other things, Friedrich Engels contributed very important discussions on some notions of nationality, military and scientific affairs, industrial operations. And perhaps two of his great contributions to the philosophical tradition of the West are historical materialism and dialectical materialism .

Engels also took a stand against the institution of marriage because he considered it unnatural and unjust. He maintained this conviction in spite of his long relationship with Mary Burns, who also helped him to enter the working class in England.

Several of his observations and notes on the British working class provided key insights into the terrible working conditions they faced. From there he also became involved with politicians and journalists with whom he shared radical thoughts for the time.

It was until 1845, when he began to formulate, together with Marx, a materialistic interpretation of history, in which he proposed the eventual consolidation of a communist society . They spread the same through different groups, mainly working class, within Germany, France and England.

Eventually, the Communist Congress in London adopted several of his ideas, and authorized him to begin outlining the principles of communism. Thus, the first part of the Communist Manifesto (The Manifest der kommunistischen Partei) was published on February 21, 1848. This text is mainly written by Marx, but includes many of Engels’ definitions of communism.

Other key texts and important books by Engels

The first work published by Engels was not an academic text, but a poem entitled The bedouin , which was included in the 1838 edition of Bremisches Conversationblastt.

His most popular work began in the 1840s, with The Holy Family (1844), which was a critique of the “Hegelian youth” , which was a very popular academic circle evidently influenced by the philosopher Georg Wilhelm Friedrich Hegel. He later published The Situation of the Working Class in England (1845), which contains several of the beginnings of socialism and its development, and is therefore considered one of the classic texts.

Later he published the work From Utopian Socialism to Scientific Socialism (1880), where he criticizes socialist utopias and offers an explanation of capitalism from the point of view of social and economic development and progression understood by historical materialism.