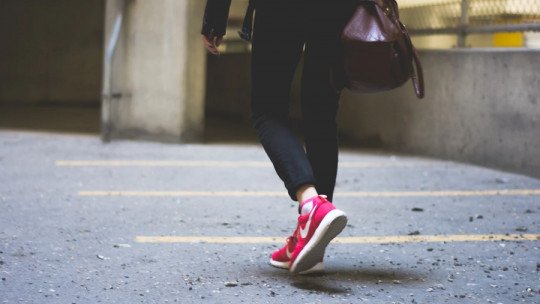 Gait disorders significantly affect older adults and contribute to increased morbidity due to the falls they cause.

These types of disorders and their consequences are becoming more frequent with every passing day, as we live in increasingly long-lived societies. This is why it is important to know what the different types of walking disorders consist of , and what symptoms characterise them.

Gait disorders always imply a failure in balance and in our locomotion system, and usually affect older people who see their musculoskeletal systems and postural reflexes deteriorate with aging.

In order to understand how a gait disturbance is produced, let us first see what, in general terms, the mechanism of normal walking consists of , which can be divided into three phases: take-off, advancement and support.

While the knee is locked in extension, the soleus and the twins propel the limb, lifting the heel off the ground , while the abductor muscles and the quadriceps of the contralateral limb prevent it from tilting the pelvis and keeping it fixed.

With the contralateral limb carrying the full load, the reference limb is raised and moved forward. To do this, both the hip and the knee are progressively flexed, while the ankle and the foot are progressively extended to avoid rubbing against the floor.

It starts with the heel and immediately involves the entire sole of the foot, keeping the knee slightly bent. It is at this point that the take-off phase of the contralateral limb begins .

Walking disorders may or may not have a neurological origin . The most common non-neurological causes include osteoarthritis of the hip and knee, orthopaedic deformities and visual deficits.

The characteristics of a walking disorder can indicate the aetiology. Difficulty in starting to walk may be due to Parkinson’s disease or frontal subcortical disease. And when difficulties in walking are associated with cognitive deficit and urinary incontinence, normotensive hydrocephalus is suspected.

On the other hand, the shortening of the step is quite nonspecific, but it can be found in neurological, musculoskeletal or cardiorespiratory problems . When symmetry of movement between the two bodies is lost, it usually means that there is a unilateral neurological or musculoskeletal disorder.

If the patient presents high variability in the cadence, length and width of the gait, it usually indicates a possible disorder of the motor control of the gait due to a cerebellar syndrome, frontal or a multiple sensory deficit. And in patients with a deviant gait, cerebellar and vestibular diseases are often found.

Instability for trunk control may be caused by alterations in the cerebellum, frontal subcortical areas and basal ganglia.

On the other hand, the slowing down of the gait usually represents degeneration of the basal ganglia and extrapyramidal dysfunction, and very possibly involves early Parkinsonism.

Gait disorders often have a multifactorial aetiology and therefore a thorough diagnosis is important. Good observation of the patient’s gait, signs and symptoms can guide the practitioner to the origin of the predominant disorder.

The main gait disorders are described below:

These types of gait disorders affect 20-50% of older adults and are one of the most common causes of falls.

It is caused by hemiplegia or paresis of the lower limb, as a result of suffering a stroke or other brain injury. The subject has to swing the leg in an outward arc (circumduction) to ensure take-off.

At the same time, there is a lateral bending of the trunk towards the healthy side and a small supporting base is maintained, so there is a high risk of falling.

This gait disorder is a type of bilateral circumduction; that is, the person’s legs are crossed when walking. The dorsiflexor muscles of the ankle are weak and the feet scratch the ground. The patient takes short steps with great effort.

The most common causes are cervical spondylosis and lacunar infarction or multi-infarct dementia .

The typical gait of Parkinson’s disease is bradykinetic, with short, very slow steps and poor ground clearance . The person walks maintaining the flexion of the hips, knees and elbows, leaning the trunk forward and without swinging the arms.

There is usually a loss of forward balance, as the body begins to move before the feet. As the movement progresses, the steps usually become faster and sometimes they have difficulty stopping, and they can easily lose their balance.

It usually appears when there are frontal lobe alterations and is characterized by a wide supporting base, a slightly bent posture and small, faltering and dragging steps.

The initiation of walking is usually complicated and the patients remain “stuck” to the ground , being able to oscillate and fall when making the effort to lift their foot. This walking disorder can appear in patients with Alzheimer’s disease, dementia of vascular origin or normotensive hydrocephalus.

This gait disturbance usually occurs in posterior chordal injuries. There is a broad base of support and the patient walks strongly . There is often a loss of the sense of position, so that the sufferers do not know where their feet are and throw them forward and outward.

These patients often have balance problems and wobble from side to side . In addition to the ataxic gait, significant vitamin B12 deficiencies, spinocerebellar degeneration and cervical spondylosis often occur.

In addition to the problems generated by immobility and disuse, there are other pathologies that produce circulatory problems and impaired walking.

After a greater or lesser number of steps, the patient presents numbness, tingling, cramps or pain that forces him/her to stop for a while before starting to walk again.

There are other types of conditions that cause muscle weakness and gait disturbance : hypo and hyperthyroidism, polymyalgia rheumatica, polymyositis, osteomalacia and neuropathies; also the prolonged use of drugs such as diuretics and steroids.

Any loss of proximal muscle strength leads to unstable and clumsy gaits.

3. March of the Penguin

In this gait disorder, a tilting of the trunk on the outside of the foot is produced, which rises due to weakness of the gluteus medius and the inability to stabilize the weight of the hip. These patients have difficulty rising from low places and when climbing stairs .

This gait disorder occurs in patients with arthritic problems with numbness and pain. The foot is usually placed flat on the floor to reduce the shock of the impact. The take-off phase is avoided to reduce the transmission of forces through the disturbed hip.

Falls in these types of conditions

Falls in the elderly population represent a real public health problem. Approximately 30% of people over 65 who are independent and autonomous suffer at least one fall per year. In people over 75, the percentage rises to 35%, and up to 50% in people over 85.

Death rates from falls increase exponentially with increasing age, in both sexes and in all racial groups.

On the other hand, falls are more frequent in women, although as the years go by, the tendency is to even out. It should also be noted that falling is a risk factor in itself for further falls; for example, in the record of a patient’s medical history, a history of having fallen is considered to be a predictor of future hip fracture .

The vast majority of falls occur in enclosed places, unrelated to any particular time of day or time of year. The most common places for falls are the bathroom, kitchen and bedroom. And the activity that most favours falls is walking. One out of every ten falls occurs on the stairs, with the descent being more dangerous than the ascent, as well as the first and last steps.

When faced with a fall, the first thing the professional must do is: assess the person as a whole; identify the risk factors and the circumstances of the fall; early estimate the consequences in the short and long term; and, finally, try to prevent further falls.