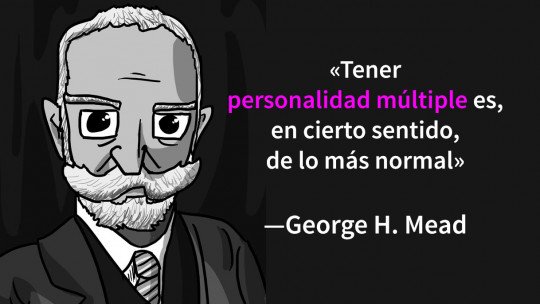 Mead was the proponent of social behaviorism and the concept of symbolic interactionism. Throughout a lifetime devoted to the study of human behavior, George Mead drew on the teachings of John B. Watson to study social interactions with the scientific method by flag.

George H. Mead’s legacy is extensive and valuable. He is considered one of the architects of social psychology and some of his most studied works are the following:

To know better the reflections and phrases of George H. Mead, nothing better than this compilation. Here we leave you with his best famous quotes .

1. Social psychology is particularly interested in knowing the effect of the social group on the experience and behavior of each of its members.

His specialty was to study how these processes occur between the group and the individual.

2. There is no clear line between social psychology and psychology.

With this phrase, George H. Mead explains that social psychology is simply a way of analyzing reality. After all, we are social beings, so it is logical to think that a large part of our psyche comes from the interactions between individuals who live in our close environment.

3. In times of war we identify with our nation, and the interests of the nation become our own interests.

A clear proof of how we identify with the values of our social group.

A paradox that explains a lot.

5. Having a multiple personality is, in a sense, most normal.

The limits of mental illness can be very diffuse, especially considering the infinite amount of interactions and stimuli we experience every day.

6. Man lives in a world of Meanings. What he hears and sees means what he wants or can assume.

A phrase that invites us to reflect on language and communication between humans.

7. History is always an interpretation of the present.

It is often said that history can only be lived in a temporal sense, but historians know that our cognitive and ideological biases play a role in how we explain events.

A reflection that alludes to the hidden dynamics of power by which economic crises are necessary.

9. The beauty of a face is not an autonomous quality but a relationship or proportion of qualities.

A reflection on the social background of our conception of beauty.

10.Imagine the situation of a scientist solving a problem, where he has certain data, which require certain answers. Some of these data require the application of such and such a law, while others require a different law.

On the methodology used to resolve doubts in the context of the investigation.