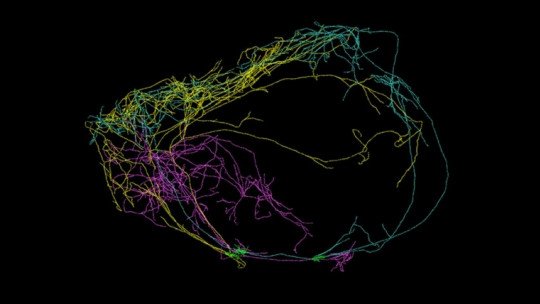 What is the nature of consciousness? This is one of the great mysteries of psychology, neuroscience and philosophy of mind, and although it may seem curious, research on animals, whose sense of consciousness has to be something different from ours, has helped to clarify it.

In fact, a team of researchers at the Allen Institute of Brain Science led by Christof Koch recently reported the discovery of three giant neurons that connect much of the brain of mice; these neurons may be the physiological basis of consciousness, but other experts disagree.

Christof Koch and his team made a presentation to members of the neuroscientific community in which they presented the methodology and results of their research on neuronal connectivity in mouse brains.

The most outstanding aspect of his presentation was the identification of three giant neurons that arise from the brain structure known as the “cloister” and connect it to a large part of the brain. The largest of the three comes to surround the entire brain , while the other two also cover a significant portion of the hemispheres.

As the three-dimensional images obtained from the research revealed, these three cells maintain strong synaptic connections with neurons in many different regions of the brain. This suggests that they may play an important role in coordinating the electrochemical impulses of the central nervous system.

However, at the moment the existence of these three neurons has not been confirmed in other animal species , including humans, so great caution must be exercised in trying to generalise the statements of Koch’s team.

What is the cloister?

The cloister is a layer of neurons attached to the underside of the cerebral neocortex, very close to the insula and the basal ganglia; it is sometimes considered a part of this structure. Its amplitude is irregular, measuring several millimeters in some areas and much less than one millimeter in others.

This region of the brain makes synapses with many cortical and subcortical structures , including the hippocampus, fundamental for long-term memory, and the amygdala, involved in emotional learning.

Neurons in the cloister not only maintain relevant connections with other parts of the brain, but are also connected to each other very closely. This has been associated with the uniform processing of stimulation passing through the cloister.

The proposal of Koch’s team

Based on his recent research and other research he had collaborated on before, Koch argues that consciousness could be located in the cloister , which has been the main focus of his professional career.

According to this team’s proposal, the three giant neurons that they have found would allow the coordination of nerve impulses in the cloister : they associate the reception and the sending of signals from this structure with the appearance of consciousness, taking into account the globality of this transmission and the functions that have been attributed to the cloister.

Another research relevant to this hypothesis is the one carried out by Mohamad Koubeissi’s group (2014) with a woman affected by epilepsy. This team found that the stimulation of the claustrophobia by electrodes “deactivated” the patient’s consciousness , while the interruption of this stimulation caused her to regain it.

The Allen Institute research team triggered the production of fluorescent proteins in individual neurons originating from the cloisters of several mice. They used a substance that, because it was present in the body, caused the activation of certain genes.

By propagating through the target neurons, these proteins give the entire length of these cells a distinctive colour. They then took 10,000 images of sections of the brains and used computer software to create three-dimensional maps of the activated neurons .

Criticisms of this hypothesis

Several neuroscience experts have disagreed with Koch’s team proposal. In general, they have criticized the localization of their hypothesis, which attributes to the faculty the main role in human consciousness without a solid research base.

To study the veracity of these approaches, Chau and collaborators (2015) conducted a study with 171 war veterans who had suffered head injuries. They found that injuries in the cloister were related to a slower recovery of consciousness after the damage , but not to more serious long-term sequelae.

For the moment, the evidence in favour of the hypothesis that the cloister is key to consciousness is inconclusive, especially when we refer to human beings. However, the evidence does suggest that this structure may be relevant for attention control through the connection of different regions of both brain hemispheres.