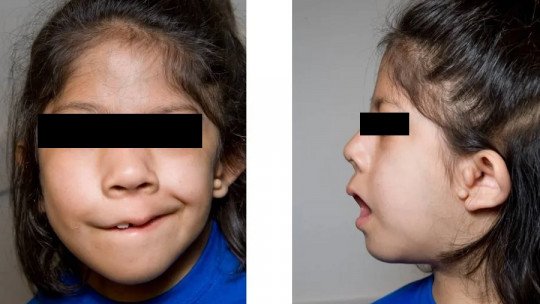 Goldenhar syndrome is a rare medical condition in which the patient suffers from malformations in various parts of the body, particularly in the outer ear, face and neck vertebrae.

The causes are not known exactly, but it is believed that it is due to an interaction of environmental and genetic factors, and the degree of severity is very variable. Let’s see below what this rare disease involves.

What is Goldenhar syndrome?

Goldenhar syndrome, also called facio-auricular-vertebral or oculo-auricular-vertebral dysplasia, is a very rare medical condition in which several malformations occur . These arise from problems during fetal development, specifically in the first and second brachial arches, structures which will form the neck and head in the fully developed baby.

Among the main malformations present in the syndrome we find a clear asymmetry of the face, as well as problems in the eyes, ears and spine. The degrees of deformation vary greatly from affected to affected, with cases in which either they have a very poorly formed ear, or not even one at all. Benign eye tumors and spinal abnormalities may also occur.

It doesn’t just affect the face. Patients may have heart, lung and kidney problems, as well as alterations in the central nervous system . The cause of the disease is still being investigated, although it points to an interaction between genetics and environment. Treatment is variable, depending on age, the severity of the case and whether the patient has received the relevant operations before.

Goldenhar syndrome belongs to the group of hemifacial microsomia diseases , medical conditions in which alterations in the face and associated structures occur. It is not yet known whether the diseases catalogued within this group are all different conditions or whether they would form part of the same pathological spectrum, in which there would be different degrees of severity.

This syndrome has different degrees of severity, although it can be said that in milder cases the symptoms and signs can be considered highly disabling. The symptoms are already present from birth, and it is on the list of medical conditions that can cause deafblindness . Between 70% and 90% of cases are only affected on one side of the face (unilateral involvement), with the right side usually being the most affected, with approximately 60% of cases.

Among the symptoms of Goldenhar syndrome we can find all kinds of malformations, especially in the face. In practically all cases, malformations of the external ears occur, which may involve the following symptoms:

As we have already commented, in this syndrome there is asymmetry between the two sides of the face , this being usually due to a scarce development of a part of it. The defects that can be found in the malformed part of the face are

In the eyes, apart from cysts, other malformations can occur . Among them we can find:

There are alterations in the vertebrae, mainly in the cervical ones . The following conditions may occur:

But even though this syndrome is also known as facio-auricular-vertebral dysplasia, it does not mean that there can only be alterations in the face, ears and vertebrae. Deformities can be found in the entire skull, such as having a very small head and encephalocele , that is, a brain deformation in which the cranial lining and protective fluid are left out, forming a bulge of different size. Because of this, between 5% and 15% of cases have intellectual disabilities.

It is estimated that the incidence of this syndrome is 1 in 25,000 live births , although the genetic disorder associated with this condition that appears sporadically is present in 1 in 3,500-5,000 births. It affects mostly males, with a M/V ratio of 3/2.

The exact cause of Goldenhar syndrome is not known, but in the cases described in the literature several factors have been proposed, grouped into four: environmental, hereditary, multifactorial and unknown, this fourth and last group being the label where most cases are found.

Among the environmental causes, the use of medications during pregnancy that contain teratogenic agents has been proposed as the main cause , that is, that they induce malformations in the fetus. These would include:

It should be noted that ibuprofen, aspirin, and ephedrine, while it has been suggested that they may have something to do with the onset of the syndrome, recent studies indicate that this may not be the case. As for thalidomide, its action as an inducer of congenital malformations of thousands of newborns between the fifties and sixties is well known.

Another environmental cause is the use of drugs during pregnancy, especially cocaine . The possibility of developing Goldenhar syndrome has also been linked to the mother’s exposure to insecticides and herbicides during pregnancy.

Other environmental factors, in this case not associated with substances, are that the mother has diabetes mellitus, has had multiple pregnancies or has resorted to assisted reproduction.

In most cases, the onset of the syndrome is sporadic . This means that there are no other cases in the family. However, the possibility of genetic alterations leading to the appearance of the syndrome has been raised, especially abnormalities on chromosome 14.

Between 1% and 2% have the syndrome through autosomal dominant inheritance , although there are rare cases in which inheritance is autosomal recessive.

Inherited cases are more common when the syndrome affects both sides of the face. Deafness, mouth abnormalities, and ocular dermoid cysts usually occur in sporadic cases.

Cases where the cause is solely genetic or solely environmental are rare. In most cases there must be an interaction between both factors, although, as we have already mentioned, in most cases the exact cause for the specific case is unknown.

There is a possibility of trying to diagnose this condition before the baby is born. To do so fetal ultrasound, nuclear magnetic resonance and genetic studies are used . However, in many cases the diagnosis is established once the baby is born, since it is much easier to observe, with the naked eye, the facial involvement.

Although the affectation is very variable, in most cases there are combinations of symptoms, which are not at all discreet , involving facial asymmetry, jaw hypoplasia and preauricular appendages, in addition to small ears and dermoid cysts in the eyes. The presence of anomalies in the ears is considered necessary for the diagnosis.

Goldenhar syndrome has no cure. Treatment focuses on increasing the well-being of those who suffer from it, as well as opting for the most appropriate corrective measures to ensure that they can perform everyday tasks, especially focused on improving vision and hearing. Treatment depends on age, especially on how the affected bones are growing and forming.

Professionals recommend taking a number of preventive measures to avoid other associated medical problems, plan treatment, and learn whether there is a risk of another person being born with the syndrome.

Among these measures, the most important is to take a detailed history of the pregnancy, in order to know if there is maternal diabetes mellitus, bleeding during pregnancy, multiple gestation or if assisted reproduction was used. It is also important to know if the mother has been exposed to teratogenic agents or has consumed drugs, especially cocaine.

Another good measure is to make a family history of at least three generations, paying special attention to relatives who may have had some kind of malformation . It is very important to know if there have been cases of facial asymmetry, auricular malformations, deafness, heart problems or in the vertebrae, however slight these conditions may be.

As for the newborn, it is advisable to carry out a complete physical examination and a karyotype study . Hearing tests should also be performed, combined with spinal x-rays, echocardiogram and cervical renal ultrasound, as well as computerized tomography of the temporal bone, one of the cranial areas where it is usually affected. This is especially recommended after the age of five.

Given the large number of symptoms, and that they affect various parts of the body, it is important that affected children be observed by various specialists. Among those who can not miss are:

In newborns, respiratory and feeding support is necessary in case there are malformations , especially in the mouth, that make breathing and swallowing difficult. Defects in the jaw are corrected with surgical interventions. The external ear is reconstructed and the cheeks are filled in to give the face greater symmetry.

Depending on the malformations that the baby with Goldenhar syndrome has, the prognosis is very variable .

Surprisingly, most children diagnosed with this syndrome have a normal life expectancy, but this is especially so if the malformations do not affect, in a very serious way, the individual’s organs or systems. In case the patient lacks any internal organ, a rare but still present symptom in this syndrome, and that usually translate into problems in the heart, kidneys or central nervous system, the prognosis is usually less favorable.