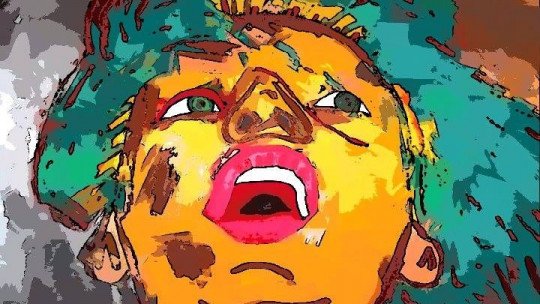 Kissco Paranoid. This is the title of a book written by the young man from Malaga Francisco José Gómez Varo , in which he relates his experience as a patient diagnosed with paranoid schizophrenia.

Throughout the pages that make up this work, Kissco (this is how Francisco José is familiarly known) gives us many of his sensations and emotions, in an artistic and emotional journey that aims to demystify this mental disorder. A work rich in images and experiences, which has been published by the publishing house Círculo Rojo .

Bertrand Regader: Kissco, in your recent book “Kissco paranoid” you relate your personal experience, it is something like an autobiography that exudes sincerity and courage. What was your reaction when years ago you were diagnosed with paranoid schizophrenia? How was the process?

Kissco Gómez Varo: I didn’t really react, I was so lost in those years that all I could think about was being well and leaving the bad times behind. I was 23 years old and we were driving to one of the many doctors I visited, while my mother was driving I had the folder with my diagnosis that I still didn’t know about. It was at that moment that I was able to read for the first time the diagnostic label of paranoid schizophrenia . At first I thought it couldn’t be true, that I couldn’t have that disease, I guess it would be the denial phase. I ignored that diagnosis, simply refused to accept it.

My family was so desperate not to know what was wrong with me that somehow it was a kind of relief to give my state a name, after that what would come would be my family’s concern for my health and the encouragement to do what they could to get better.


B.R.: What exactly is paranoid schizophrenia? How would you explain it to our readers?

K.G.V.: In my case and my experience, it’s basically having and suffering from paranoia.

My paranoia was based on the fact that I perceived messages that I had to decipher; they came from people in their movements and gestures and from nature itself. As I describe in the story, I came to call it “God’s message”, this was basically my paranoia that I suffered from for ten years. The symptoms are isolation, loss of reality, avoidance of physical contact and difficulties in social relationships. You have the need to hide because you feel watched at all times and for everything you do, even in the smallest details. This makes you different whether you want to be or not during the outbreak, but any psychotic break is temporary even if the illness is chronic.


B.R.: Have you noticed that society tends to stigmatize people who suffer from a mental imbalance?

K.G.V.: In my case, I have suffered from the fact that you are being pointed at or looked at just because you are the way you are. It has been so many times and for different reasons in my life that I have come to accept that this is something that should be expected and that even I can come to stigmatize someone for something that we don’t call “normal” in our society.

I could tell a story once we went to the movies with my sister and brother-in-law. I was looking at the film and I could feel certain messages coming from the images, and I started to mumble and make other gestures that started to bother the rest of the viewers.There was such a commotion that we had to lighten up when the film was finished, and there were even people waiting for me at the exit to see who was to blame for the fuss, so that they could point at me and say things like “you didn’t let me see the film when I paid for the ticket too”. The truth is that now I see it understandable, I might have acted the same way but at that time the only thing I felt was that terror was chasing me, I felt helpless and cornered.


B.R.: In your book, which has been published by Círculo Rojo, you express many of your experiences, but above all the sensations and emotions with which you look at life. It is a work of great visual and artistic power. What motivated you to write it?

K.G.V.: I was on the terrace of my house with my partner and it was something instantaneous, telling him ¨voy to write algo¨, I felt so full of tranquility after ten years of mental torture and so clear that I couldn’t miss this opportunity to tell about everything I’ve been through, thinking that tomorrow I could go through that outbreak again and that maybe I wouldn’t be able to have this feeling of liberation.

B.R.: Nowhere is it indicated who is the author of the illustrations and paintings that embellish the book. How did this inspiration come about?

K.G.V: If you look closely at each of them, although in some you hardly notice the signature,
Kissco , I’ve always been good at drawing or painting, I spent so much time in my room that I had to do something, entertain myself, and I was inspired by movies and music and most of those drawings came out on their own, I had them anchored in my mind and putting them on paper was for me almost a way of expressing what was happening to me.

The drawings were made during those ten years of psychotic break, which at the time did not make much sense but later, when writing the story, they fit perfectly giving a visual touch to the written words and giving a poetic sense to the work.

B.R.: What has helped you overcome your diagnosis to the point of being someone with motivations and expectations in life?

K.G.V.: Well, I’m just getting back to my old self after, I might say in a mild way, having gone through a
bad patch . I used to be a motivated kid with a desire to learn, and now I’m getting back to it, it’s like I’ve been in a coma for a long time and all that time it’s like I haven’t existed even though I’ve been marked forever. It’s a second chance that I won’t miss, even though I know that tomorrow I could be just like those years or worse.

B.R.: What would your words be to a young person who may be having a hard time because he or she has known recently that he or she suffers from paranoid schizophrenia? K.G.V.: This diagnosis is something that has to be accepted as soon as possible in order to be able to handle it and live with others as someone else.

It is not easy to accept something like this, we get carried away by the bad reputation that this term brings with it and by the first reaction we have to hear it which is one of fear, we fear the unknown, and in a way this is understandable. But in my case I could say that you have to have courage to go on and show that you only have one disease that you can fight for. It’s not something terminal that has no solution, it’s something chronic, but you can get along with will and determination.

B.R.: What message should society know in order to start rethinking the double impact suffered by people who suffer from some psychological disorder and who also have to put up with social and labour stigmatization? Do you think that we have to do pedagogy in this aspect?

K.G.V.: The truth is that yes, we can be different, but we all are different in our own way, whether we suffer from a disorder or not. There are people who suffer from mental illnesses that they don’t even know themselves, since they haven’t been diagnosed, and others who don’t suffer from any particular illness but who have serious difficulties in finding ways to make them a little happier.

This does not mean that people who have been diagnosed with a mental disorder cannot do something useful for society. Maybe we can’t do exactly the same as others, I’m not sure, but I can assure you that we are all different and we are all good at doing something useful. We can all learn what we don’t know and teach what we are good at. We could begin to demystify mental disorders by giving talks in high schools, just as there are talks that warn students of the danger of drugs or of the precautions we should take in our first sexual relations. Awareness talks that make children and young people see that it may be you or someone close to you who suffers from a psychological disorder in adult life, and some advice on how to deal with these situations on the basis of normalisation, information and respect.