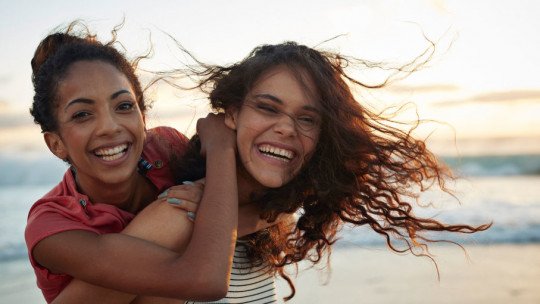 Healthy friendships constitute a bond shaped by a deep sense of commitment and intimacy , in which two human beings express their individuality without fearing that their respective vulnerabilities will be harmfully exposed.

It is an affective space in which the confluence of two people gives rise to more than a simple sum, since it provides as a result the opportunity for the development of the essential emotional aspects.

In this article we present ten keys on how to have healthy relationships of friendship, always considering that each case is unique and that the social needs of each one are also different.

How to Have Healthy Friendships

A healthy relationship of friendship is one that provides opportunities for communication, that shares time , that is based on realistic expectations, that avoids destructive lies, that facilitates spaces for the resolution of conflicts, that respects individuality, that takes refuge in freedom, that recognizes what makes it unique and that projects itself towards the future.

Below we detail each of these characteristics, all of which are important.

Sharing what happens inside us is the easiest way to forge a relationship of trust with another person . The idea is to create a common space where intimacy can unfold in a genuine way, without the need for coercion or social pressure. The moment you tell what you feel, even when it is something apparently negative, you move in the same direction.

Even though a lot of time and space is reserved for being together, imposing a barrier of silence for feelings promotes a progressive distancing, much greater than that which exists between people who are physically separated. Because when we share what we feel, the inner world is built on a common thread, and we assume less risk that the course of the years will generate insurmountable discrepancies between people.

2. Spend time with that person

Time is key in all relationships . However, in this matter, quality must take precedence over quantity. Building activities that are pleasant for both parties is fundamental, because laughing together strengthens the invisible bonds of friendship. This phenomenon is based on physiological and endocrine factors, such as the production of oxytocin or dopamine in the brain’s reward system.

Nowadays, there are many people who, despite being together in the same room, are absurdly distant from others. This can be explained, above all, by the abuse that is often made of mobile devices and other related technologies. The conversations that take place through these means limit many components of non-verbal language, which contain much of the emotional substrate of a social interaction (smiles, hugs, looks, etc.).

In a relationship between friends, and in life in general, it is important to stay connected to what is going on at every moment . However, it is also crucial to project expectations into the future, building scenarios in which the relationship has opportunities to grow. With this constructive attitude we demonstrate commitment, one of the raw materials with which the fabric of any healthy relationship is woven.

Shared plans also promote the feeling that people are similar, which ends up stimulating the search for both physical and emotional proximity (which can only be accessed with the safeguard of trust). The saying “touching makes caring” is not at all trivial, as it sums up a whole series of scientific findings on bonds, albeit translated into operational terms.

All of us have needs that we project to our social environment . The desire to be accepted and/or understood is almost universal, and through this the expectations about what we want to find among those around us arise. Thus, we may look for someone to trust when we find ourselves in difficult moments, with whom to have a good time, who nurtures our intellectual thirst or who knows how to keep a secret.

Sometimes we come to think that a true friendship is one with which we satisfy everything we desire, without realizing that with it we aspire to someone idealized and impossible. The risk of maintaining this position is twofold: either we end up frustrated (by not finding anyone who meets these requirements) or we condemn someone else to act in a way that is impossible to maintain in the long term (because of their proximity to suffocating perfection).

It is important to recognize that friendship with someone brings important things, and to value them exactly for what they are, without the need for them to satisfy everything we seek in our social life. To achieve the latter, it is best to have a wide network of people to trust, where each one can genuinely contribute with their way of being and doing.

Lies are one of the great enemies of friendships . Whoever receives it can experience it as a betrayal, and from this comes an important emotional distance. In general, loyalty is one of the most valued attributes in a person who is considered a friend, and the recourse to lies can erode all the effort to harvest a relationship based on mutual trust. For some, even a lie is an irreversible affront.

Forgiveness is basic to a relationship between two people . Because a good friendship is often forged over the years, it is not unusual for it to go through times when one party disappoints the other in some way. This is a natural occurrence, the result of friction between two human beings who are essentially different, but who are looking for a space in which to create a “we” that will reconcile their discrepancies in a harmonious way.

Asking for forgiveness and forgiving implies recognizing one’s own imperfection in the first case, and overcoming pride in the second. Both pose a clear challenge to two of the most powerful resistances that are debated in our inner selves: the desire to possess truth and the difficulty to tolerate grievances. In any case, if the situation is reversible and can be overcome, this forgiveness opens up new scenarios in which the bond can be strengthened.

7. Avoid the generalities about friendship

There are certain myths that do not fit at all with the reality of a healthy relationship between two people . One of the best known is the myth of the better half, in which an individual is expected to be incomplete by nature until he or she co-exists with another, the purpose of which is to complete him or her and be completed. Such beliefs can lead to a co-dependent relationship, both in friendship and in the couple.

It is necessary to take into account that popular sayings depend on the historical context in which they were formulated, and that what was “true” at one time may not be true today. Likewise, every friendship is unique and irreducible to stereotypes, myths or prefabricated ideas; therefore, it advances from its individuality by going through a process of exploration and self-exploration.

Certain people, when they forge a friendship with someone, can act in a very possessive way . This is due to the fear of losing the position they hold in the relationship, so any approach by third parties is perceived as a threat that must be resolved with vehemence and decision. This type of inertia leads to totally hermetic relationships, in which one of the parties fears abandonment and the other fears disappointment in some way.

The maintenance of this type of relationship is based more on the fear of loneliness than on the enjoyment of company. Time is shared in order not to lose, ignoring the positive that a friend can provide. At the same time as this happens, the rest of the relationships weaken or even disappear. No friendship can grow out of coercion or blackmail. Only freedom, and the ability to decide where you want to be, allows a friendship to grow and flourish.

9. Create your own emotional space

Any relationship between two human beings is built by shared experiences , from which their peculiarities (which are recognized as their own and distinctive) arise. It may be an experience of the past, or even jokes that feel personal, and that end up shaping a microcosm in which the feeling of unity is reinforced. The creation of this space is unique, and it is a key part of the emotional component of the bond.

Emotional bonding is what distinguishes a healthy friendship from the simple confluence of two people in the same place, and it is therefore very important to contribute to it by seeking out and highlighting which moments were unique on the path travelled so far.

10. Conflicts are not negative

Many people believe that conflict is toxic to a relationship, and live with juggling to keep it from poisoning their friendship or partner. This avoidance is opposed to the principle that, sooner or later, difficulties arise that we will have to deal with . In fact, today we know that the strongest friendships are not the ones that experienced the least friction, but the ones that learned to solve them.

Every crisis can be an ideal period to reorganize priorities, and learn something that gives us strengths to overcome adversity. And if this is true for life in general, it is also true for friendship.