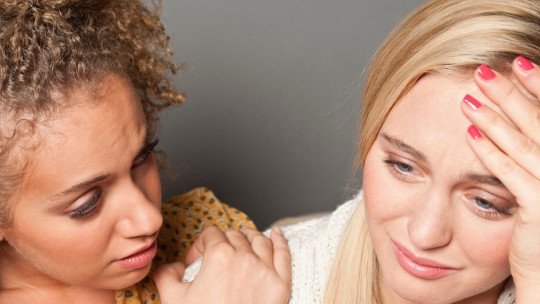 Alcohol consumption is a socially accepted phenomenon that has in fact been a part of many cultures since ancient times. However, many people consume alcohol excessively and very long time and end up becoming dependent on this substance: we are talking about alcohol dependence or alcoholism.

This situation has serious repercussions for the subject and can lead to serious health problems or even death. This is something dramatic that many families observe in one of their members, not knowing how to act. How to help an alcoholic? In this article we are going to discuss a series of general guidelines that family members and friends may find relevant and useful in addressing the issue.

Recalling concepts: what is alcoholism?

Alcoholism is considered to be addiction to alcohol, that is, the acquisition of both physical and psychological dependence on the consumption of alcoholic beverages that is generated due to the acquisition of tolerance towards its consumption. The organism needs greater amounts of substance to notice the same effects, while its absence generates powerful withdrawal symptoms, such as now dysphoria, agitation, convulsions and other types of alterations. It is consumed in such a way that a great deal of time is spent getting alcohol or other relevant activities or areas of life are neglected or impaired.

We are facing a situation in which the subject loses control in the face of consumption, which is much greater than would be expected and is taking place despite the knowledge of possible aversive consequences for both him and his environment. However, there is often a desire to stop consumption and one or more attempts may have been made (unsuccessfully). Despite this, they often deny the existence of a dependency.

The uncontrolled and frequent consumption of alcohol can have dramatic consequences , which can lead to liver cirrhosis, fatty liver or even kidney dysfunctions. The damage to these organs can be irreversible and lead to the need for a transplant or even death due to the destruction of these tissues. The alcoholic is often intoxicated, and gaps and loss of consciousness are common. In some cases the subject may reach an ethylic coma or even death by cardiorespiratory arrest.

Behaviour is also altered, ranging from aggressiveness to extreme passivity, and it is not uncommon for risky behaviour to be carried out in a state of inebriation. Socially, they may suffer abandonment of their environment or generate great suffering for those around them.

Helping an Alcoholic: Some Basic Guidelines

The families and close environment do not usually know what to do to face the problem , often blaming the subject or pretending not to know or justifying their behaviour. But such behaviours do not help the patient but may in fact complicate his condition. That is why we will now review some guidelines to help an alcoholic, both to make him/her see his/her problem and to facilitate its solution.

1. The environment must recognize the problem

Firstly, although it may seem logical, the first step to take into account is not to justify or ignore the behaviour and excessive consumption of the subject with alcoholism . The subject who suffers from this disorder or illness (which is not a vice, something important to take into account) consumes alcohol that is dangerous and that has a great deal of short and long term consequences. This fact, as well as the fact that it is an illness or disorder and not something the subject does for his own sake and over which he has total control, must be understood and understood by his close environment.

It is important to keep this point in mind, whether the subject is able to identify and recognize his or her problem or is unaware of it.

2. Approach the subject in a moment of sobriety

A seemingly logical aspect, but which may be difficult to take into account when the subject arrives drunk and with irrational behaviour, is to deal with the subject at a time when he is sober. Treating the subject in a state of drunkenness will not have the same effect , as the subject is not in a position to reflect, and can easily forget what he has said or even an aggressive response is possible on his part.

It may be simple that the frustration and pain caused by the state of our friend, partner, family member or loved one, or his or her perceptible lack of intention to change, pushes us to blame him or her for the situation. This fact does not help the subject, but can generate a reaction and the existence of conflicts that in some cases can even push the affected person to drink more to avoid the discomfort.

It is not a matter of pretending nothing is happening, but of approaching the subject directly but adopting an empathic attitude that allows to approach the subject in a proactive and collaborative way. It is also important to take into account that one should not be condescending or starting from a position of superiority, something that will also generate a reaction.

4. Watch how you communicate

Linked to the previous point, we have to take into account that we are facing a very complex situation. We need to be able to express our feelings about the situation our loved one is going through , and it is useful to include ourselves in the sentences.

The concern, if any, should be expressed and it is often helpful to mention some of the behaviors that you find troubling. Express yourself with empathy and try to seek dialogue, asking why some behaviours are not too demanding.

5. Maintain some degree of control

The subject with alcoholism is someone with profound difficulties in controlling alcohol intake, with loss of control being the most defining characteristic of this disorder. Although it is not a question of exercising continuous control over every gesture he makes, it is advisable to maintain a certain amount of control over his situation. One of the ways to do this is through money management , in such a way that it is possible to control the amount the subject carries and what is spent, and even on what depending on how. It is true that the person can obtain money from other sources or even be invited, but this management is very useful and limits the possible purchase of alcohol.

6. Avoid exposure to stimuli that generate the drinking response

Human beings are used to doing certain things in certain places. Although it is possible to drink anywhere, avoiding exposing the alcoholic to situations or environments that facilitate consumption is very useful. For example, bars, discotheques or parties are environments in which the consumption of alcoholic beverages is common.

Also, don’t drink in front of her either. This would make the subject think of alcohol and at the same time sends a contradictory message: I want you to stop drinking but I do drink.

7. Consider the possible role we play in addiction

Generally when we speak of alcoholism we tend to think of the subject in question as the one with the problem. However, sometimes the environment itself favors or has some kind of role that makes it easier for the subject to resort to consumption. An example of this is the blame mentioned above, in situations of abuse or abandonment or even in excessive paternalism.

Alcoholism is a condition, a chronic disorder whose existence may endanger the life of the person who suffers it . That is why it is essential to go to some kind of professional in order to treat the different elements that condition and maintain alcohol consumption. In extreme cases, it may be very useful to go to a detoxification centre (in some cases it may even be required at a judicial level, although it is advisable to make the person understand the need to go).

In this sense, it is advisable to take an interest and actively participate in the therapy, in such a way that one learns to relate to the subject and the symptom and acquires guidelines for action in addition to providing social support to get out of a situation that, at least, lasts. It is also very useful to make the subject reflect and motivate him/her to change.

Just recognizing alcoholism is already a very hard step for someone with this disorder. And the process of ceasing consumption is long (important: it should not be stopped suddenly unless medical monitoring is available due to the possible emergence of withdrawal syndromes with deadly potential, such as delirium tremens) and complex, having to deal with different aspects both behavioural and cognitive. Social and environmental support is a good prognostic factor and a stimulus to progress in treatment.

10. Encourage him to attend support groups

Alcoholics Anonymous is an association created with the purpose of serving as a support group for solving alcoholism problems and generating recovery, while allowing the subject to meet with others who have gone through the same situation . In these meetings, the person will be able to freely express those elements and aspects that he or she does not want or can tell us about his or her experience and contrast his or her experience with that of others.

One way to help a loved one quit drinking, or to maintain the changes with treatment, is to explore and employ with him or her activities that are enjoyable and not compatible with drinking. It is about learning to have fun without needing to be drunk .

This is a fundamental aspect of all addictions. Treatment can be successful, but different stressors or situations can lead to a relapse into alcoholism. That is why, as it is already done in therapy, we must take into account the need to work on its prevention with elements such as the two previous points.

The above refers to ways to help the alcoholic from the family or friend context, being the social support towards the withdrawal of alcohol one of the most important elements to maintain and generate the perception and motivation for change. But also in psychological therapy different methods are used to help the alcoholic to stop drinking, in addition to controlling craving. In fact, it is important to be able to attend therapy, given how much is at stake.

Broadly speaking, the therapy focuses firstly on acquiring awareness of the problem in cases where this does not exist, and then on making people reflect on the pros and cons of drinking behaviour, reinforcing the motivation to change and acting through various technical programmes (including the community reinforcement approach, marital and couple therapy, exposure therapy with response prevention, contingency management, training in coping and social skills, controlled drinking programmes) and finally maintaining these changes with relapse prevention programmes.

During the treatment, techniques of very diverse theoretical aspects can be used, the most common being cognitive-behavioral, systemic and humanistic. It is also common for substances such as disulfiram to be used during treatment, which generates unpleasant effects in the body when interacting with alcohol in such a way that its consumption acquires an aversive red colour.