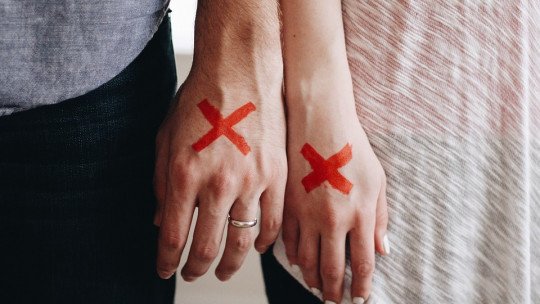 Ending a relationship is always complicated, but it’s not just when you’re breaking up. Just thinking about whether we should end that stage of our life that we have shared with someone else can be just as hard. Indecision is a real source of stress and anxiety.

In this article we’ll look at several things you need to consider in order to know if it’s time to let go of your partner and return to bachelorhood.

The art of knowing when to let go of your partner

In most cases, when marital or relationship crises occur, they do not appear suddenly and clearly. If this were so, the situation would be very hard, but at least everything would be clearer. What happens, however, is that problems and conflicts gradually accumulate , making the malaise entrenched and increasingly difficult to manage.

No wonder that’s the norm. Faced with situations that are uncomfortable but not very well defined and complex to understand, we tend to cling to the hope that everything will solve itself; in other words, an avoidance situation is adopted in the face of the problem.

Closing one’s eyes and pretending nothing is wrong may seem unreasonable, but when it is our turn to live these cases in our own flesh, it is usually a very attractive option. If the present gives us the possibility of not going through a very bad time, we often opt for that, even though we know that it may lead us to suffer more in the future. And this, of course, also happens with love relationships .

But if we sharpen our ability to detect those points in the relationship where there is no turning back and everything indicates that the chances of everything improving are very low, it will help us to make the right decision in that case: to terminate the relationship so as not to suffer any more . Let’s look at some keys to know if this situation has been reached.

1. The signs of abuse

This is obviously the most important aspect when evaluating the minimum quality requirements of a relationship . If insults, physical aggression or other forms of psychological abuse (such as gaslighting) become the norm, the couple’s relationship has no reason to exist, since it is not in fact a relationship, but rather a bond based on the denigration of the other or even the threat to their own integrity. Love and this kind of treatment are incompatible.

Although centuries of normalization of violence against women and romantic love based on sacrifice have meant that in some cases it is not “automatic” to recognize abuse when it is suffered, it is possible if one considers certain red lines that cannot be crossed, such as constant scorn, mockery, insults or the threat of physical pain or injury.

In this case, then, it is not a question of letting go of the partner, but of acting accordingly in the face of the fact that you do not have a de facto partner, but an abuser.

2. You are only afraid of what they will say in the face of the breakup

If the first concern that comes to mind when thinking about a break-up is what people will say, this is a symptom that there are solid reasons to end the engagement or marriage . In the end, the packaging of a relationship does not make it exist or make sense.

3. You’ve been feeling bad for a while now

When a part of us feels that we are following in the relationship out of pure inertia, it is normal that feelings of guilt arise, especially when establishing plans for the future, since as time goes by more commitments are made, on the one hand, and on the other hand one pretends to appear normal, deceiving the other person .

In this case it can be considered that there is manipulation, and the fact that of fear to break the heart of the other person exposing the situation does not justify that this alive deceived, option that ends up causing much pain to both parts.

4. There is a dominance situation

Relationships in which there is a clear asymmetry of power in the roles adopted by each person do not have to be a form of abuse, but they are still toxic relationships.

This is because the habit of always letting the person decide and the person himself adapt to these situations can quickly lead to mistreatment. In the end, the idea that it is one person who has the criteria and another who has to follow orders is normalised (even if at first he simply accepted a passive role so as not to have to make too much of an effort).

5. The other person makes it clear

No matter how much it hurts; if the other person wants to end the relationship, it must be clear that there is nothing to discuss or negotiate. The obsessive ideas about what you can do to get your partner back are frequent in some cases, but you should not let them dominate you.