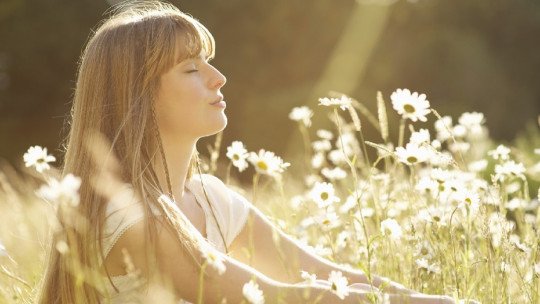 The concept of inner peace is often used informally in all kinds of contexts. Although it is an idea that is often associated with some eastern traditions linked to Buddhism and its idea of enlightenment, there is also a secular interpretation of this phenomenon. One that can be approached from psychology leaving behind the religious connotations of the term, and that has to do with a way of living life that many people aspire to achieve.

In this article we will briefly look at what inner peace consists of and what we know about how to achieve that state of mind .

What is inner peace?

Inner peace is a cognitive and emotional state linked to a feeling of well-being and calm, which in turn defines the way we behave. This idea has its roots in certain eastern philosophies of life , linked to religions such as Buddhism and Taoism, which are characterized by claiming the mentality of non-action.

Just as the western mentality is characterized by wanting to transform the environment to adapt it to human interests, in Asia a culture of denial has prevailed, of trying not to deviate from the natural and humble ways of acting , in order not to alter the order of things.

Thus, inner peace in its traditional sense is a reflection of the order in which we should ideally live: an expression of the fact that we find harmony in our way of perceiving the environment and, consequently, in our way of acting and thinking. Of course, each religious tradition has defined it in its own way, but in general all of them share this emphasis on non-action.

Your relationship with desire

Sometimes inner peace is misconceptualized as the absence of worries or fears, i.e. disassociated from any negative mental disposition related to fears and anxiety. However, traditionally, inner peace has not been defined as the absence of these factors with a negative emotional impact. Furthermore, it is characterised by the fact that there are neither great desires nor, in general, psychological tensions that push us to act on our environment in pursuit of a specific goal.

How to develop this psychological state of well-being

Inner peace can be associated with well-being and the feeling that there are no major conflicts to be resolved in our immediate environment. With this in mind, the best measures to develop inner peace are the following.

It is impossible to feel good psychologically if we lead a lifestyle that wears down our health. Therefore, it is necessary to be clear that we must have a healthy and balanced diet , we must do regular moderate exercise, and we must sleep the corresponding hours so that, among other things, our nervous system regenerates.

To reach inner peace, it is necessary to have attended to basic needs , those that have to do with having a constant material support to live: a home, food, relationships and other dispositions that are vital, such as access to energy, ways to regulate the temperature in a way that we adapt to it, etc.

Therefore, many people need to resolve their economic situation before they can consider achieving that psychological well-being. Trying to reach inner peace in the midst of poverty, besides being ineffective, trivializes the importance of some material minimums that dignify human life.

Many of the daily concerns of human beings are totally illusory problems created by oneself. For example, the need to be liked by everyone, or to follow the path of work that others expect of one, or the obsession to get as close as possible to the canons of beauty… Renouncing these artificially imposed goals is a liberating act that brings us closer to inner peace.

4. Reconcile with your imperfections

Perfection only exists in mathematics. Realization is characterized by imperfection, and as part of it, you should not expect to fit perfectly into the molds of what is considered ideal . Being aware that no matter how much we change we will never be totally perfect makes us more sensible and able to adapt to circumstances, but also makes us more likely to find peace with ourselves.

5. Don’t be obsessed with the idea of revenge

Harming those who harm us makes us slaves to a vicious circle of attacks that sooner or later makes us look only at the negative side of life. Forgiving and letting go of old offenses is the best way to come out of these experiences stronger, since it is the ultimate test of maturity. It is no use embarking on the mission of constantly punishing just for doing it.