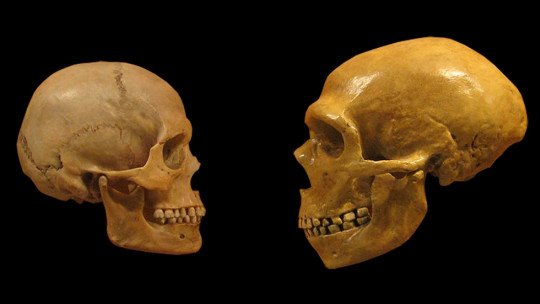 The word “Neanderthal” is often used as an insult or in a pejorative sense, indicating that the person referred to is crude, brutish, impulsive and unintelligent. The fact is that most people consider that the Neanderthal, one of the different human species that have populated the earth and that became extinct during prehistory, had a very limited cognitive capacity, a kind of savage that could not compete with the Homo sapiens , species to which we belong.

But is this really so? Is Homo sapiens smarter than Neanderthals? In this article we will make a brief reflection on this issue.

Who were the Neanderthals?

Neanderthals are an extinct species of the genus Homo (i.e. one of the species of humans) that lived mainly in Europe and Asia approximately 230,000 to 28,000 years ago . It is the last species of the genus homo to become extinct, leaving Homo sapiens as the only survivor of this part of the tree of biological evolution. This species shared with Homo sapiens the Indo-European territories for thousands of years, until for reasons still unknown they ended up disappearing.

The Neanderthal was physically very adapted to life in cold, mountainous environments like those of Ice Age Europe. He was shorter and much stronger and more muscular than the sapiens, and had a shorter pharynx and a wider nose. It also had a larger skull, in which the double ciliary arch (a kind of bone covering the eyebrows) and the prognathism stand out, as well as a greater cranial capacity .

Popular culture has often placed this species below modern homo sapiens, associating it with an image of savagery and considering its lower or less adapted limbs to be extinct. But this does not imply that they were, or that they lacked intelligence.

The truth is that the Neanderthals were not gross without intelligence . This human species, which in fact was close to being called Homo stupidus (Ernst Haeckel even proposed such a name for this species after its discovery), actually had a rather high level of cognitive capacity. And there is a great deal of evidence that merits the consideration of these beings as very intelligent creatures.

They have been observed in different sites where there is evidence that the Neanderthals buried their dead , which implies the ability to perceive themselves as differentiated entities, and the presence of abstract thinking. They also mastered fire and made complex tools, although different from those that our ancestors would end up using, and traces of dyes have been found that could have been used to dye clothes.

Although until recently it was believed that they had left no artistic representations, the antiquity of some cave paintings (prior to the arrival of Homo sapiens ) seems to indicate that they also produced artistic products of this type, which would indicate the capacity for abstraction and symbolisation .

They had a social structure, and there is evidence that they cared for the elderly and the sick. Their anatomical structure and brain capacity mean that they are considered to have had the ability to use oral language.
It has also been observed in different archaeological sites that the Neanderthals employed different strategies to hunt, often using the characteristics of the terrain to do so . This implies a capacity for planning, abstraction and judgment, as it requires knowledge of the environment and the advantages and disadvantages of certain geographical features, such as wells and ravines.

The fact that Neanderthals possessed intelligence is not sufficient proof that our cognitive capacity cannot be greater. However, the opposite is also not supported by empirical evidence. The behavior of one species or another was similar, and only the disappearance of the Neanderthals is used as proof of their reduced mental ability.

In fact, the cranial capacity of these humans (let’s remember that, like us, they are part of the genus Homo) is on average higher than that of Homo sapiens, being also the largest brain . Although this does not necessarily indicate a higher intelligence (since the fact that a brain is bigger does not necessarily imply that it is more efficient), it does indicate that the brain capacity could allow the development of cognitive abilities. Its nervous system, however, could function differently from ours, leading to different ways of thinking and seeing the world.

Possible reasons for their extinction

Many people consider that if the Neanderthals became extinct and we are still here it was, at least in part, because the cognitive capacity of Homo sapiens allowed it to face problems and disadvantages that the Neanderthal, in principle more primitive, could not face. But the truth is that the fact that he has survived until now does not have to be a result of greater intelligence. There are multiple reasons that led to the disappearance of the Neanderthal, some of them empirically contrasted.

One of the possible reasons is found in a phenomenon that has been repeated countless times throughout history, between members of the same species that have lived in different ecosystems: the transmission of diseases for which the members of the other party are not prepared . An example of this can be found in the conquest of America by the Europeans; they unintentionally brought to the American continent diseases for which the natives had no resistance or immunity, causing a large number of deaths (being rapidly transmitted in the large cities and settlements and depleting the native population). Something similar could have happened among the Neanderthals before the arrival of Homo sapiens .

Another reason, and probably one of the main ones, is inbreeding, something that has been corroborated by science. The Neanderthals, in what was then cold Europe, tended to establish small social groups in which related people lived together to some degree, reproducing themselves with these in such a way that there was a high level of inbreeding. In the long run, this practice gradually weakened the species as harmful genetic mutations and alterations were added and new genetic material was not incorporated, to the extent that over time it became difficult to give birth to new healthy and fertile Neanderthals.

The Cro-Magnon man, on the contrary, travelled great distances and had to move often to hunt, a mobility that made it easier not to have such a high level of inbreeding when finding other settlements and linking up with similar ones with which there was no consanguinity.

It should also be noted that the Neanderthals were adapted to Europe and tended to seek caves for shelter from the cold , caves often sought and inhabited by predators they had to face.

Finally, although most of us imagine the extinction of the Neanderthals as a process in which they all ended up dying, there is a theory that in reality their extinction could have to do with hybridization . The Homo sapiens became very numerous compared to the number of Neanderthals, and the species could be lost as its genes were diluted in the crosses between Neanderthals and sapiens. This is consistent with the fact that it has been found that today’s human being has genes belonging to the Neanderthals.

Another aspect that may be relevant to comment on is the fact that in the genes of the current Homo sapiens sapiens traces and remnants of DNA from Homo neanderthalensis have been found. This implies that Neanderthals and Homo sapiens came to produce fertile offspring, and that we actually share part of our heritage with this other species. In fact, some recent researchers consider that today’s human beings possess about two percent of Neanderthal genetic material, the percentage being much higher than the first studies seemed to indicate.

Some of the genes that have been shown to be similar to those of this species have to do with skin and hair color (possibly lighter in Neanderthals), tolerance to solar radiation (higher in Neanderthals, who lived in Europe before Homo sapiens migrated from Africa), mood, and circadian rhythms. Many of them are also related to the immune system , thanks to which we can defend ourselves from infections and diseases. On the other hand, links of some of these genes have also been found with schizophrenia and other psychiatric disorders, autoimmune problems, cholesterol and fat accumulation.