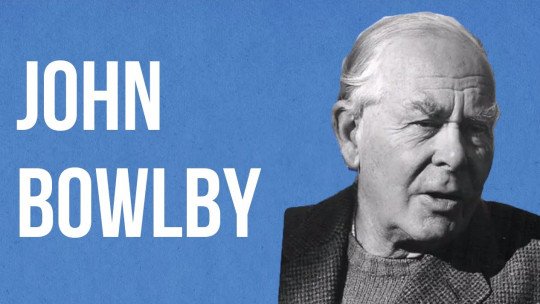 Perhaps today it seems obvious to us that the relationship between a mother and her baby is of great importance in human development, but this idea has not always been so obvious.

The idea of the importance of attachment in childhood has often been present in different societies, but it was not until the creation of the Attachment Theory that the effects of its presence or absence were analysed. This theory was developed by John Bowlby, of whom we leave you a brief biography .

Edward John Mostyn Bowlby, more popularly known as John Bowlby, was born in London on February 26, 1907. The son of Sir Anthony Alfred Bowlby, who was to have the title of baron as a surgeon of the royal house, and Mary Bridget Mostyn, he was brought up as the fourth of six children in a wealthy upper-class society.

In those days the upper classes used to leave the little ones in the care of the service, having nannies to look after them.

John Bowlby’s early years were spent in the care of a caregiver named Minnie, having little contact with his mother. However, when he was four years old, his mother left the family’s domestic service, causing the little boy great suffering and a sense of loss. Although she was replaced, the new nanny had a cold temper that did not make her feel comfortable.

In 1914 World War I broke out, causing the father of the child to enlist and become an absent figure of whom Bowlby and his brothers would hardly have any news as his mother did not share the content of the letters he sent.

A few years later he would be sent to a boarding school, partly as a way of keeping them protected in case of attack. This set of events would cause him great pain, which probably contributed to his feeling the need to work on aspects such as bonding , separation anxiety and fear of loss in minors.

After several years of boarding school, he studied at Dartnorth Naval College. After that he would try to enter medical school at Cambridge University, but during his studies he began to be attracted by psychology and left it to later begin training in psychology at Trinity College of the same University of Cambridge. His main interest was in childhood and the developmental period .

After graduating, he would begin to do various studies on delinquent and maladjusted children, noting that they often came from broken homes or had been abused.

In 1929 he enrolled at the University College of London, finishing his studies in Medicine (as well as Surgery) in 1934. But his concerns with psychology were not over, and he was trained in psychoanalysis.

During 1937 he was accepted as a psychoanalyst at the British Psychoanalytical Society, being analyzed by Riviere among others. After that, he was trained by Melanie Klein in child psychoanalysis and began to analyze minors. In spite of his connection with this author, the perspectives of both will differ, giving Bowlby a greater importance to the environmental and upbringing factors and to the real relationship between mother or maternal figure and child. This will cause him to be rejected and criticized by the psychoanalytic school by leaving aside such central aspects in this theory as the unconscious.

In 1938 he married Ursula Longstaff, with whom he would have four children. That same year he received the proposal to preside over Trinity College, a proposal he would accept. In addition, he began working in the child psychiatry unit of a Canonbury clinic. However, World War II would lead him to be recruited. He would become a lieutenant colonel in the medical corps.

Tavistock Clinic and participation in the WHO

After the war, he accepted a position as assistant director at the Tavistock Clinic in 1950, where he was able to observe first-hand the effects of the war on his patients’ psyches. At this clinic he would eventually meet and work with Ainsworth (who would later expand his theory of attachment and make numerous contributions to it).

That year Bowlby would also begin to be consulted by the World Health Organization to advise on the possible mental health of children who had become homeless after the war. This contribution would go a long way towards creating the Charter of the Rights of the Child.

In the following years the author would carry out numerous experiments and studies that would allow him to understand child development . Maternal Care and Mental Health would be one of his most prestigious publications at that time, being the preamble to his theory of attachment.

Formulation of the Theory of Attachment

Bowlby’s most famous contribution to psychology was developed between 1969 and 1980, with the birth of Attachment Theory , a description of the relationship between emotional experiences and relationships during childhood and behaviour , establishing the need to forge bonds of secure attachment.

Aspects such as the effects of abandonment or ambivalence and the innate need for maternal care generated by the feeling of attachment are worked on. Attachment is described as an adaptation mechanism based on the search for protection against possible hostile agents, as well as the consequences of cutting off such attachment or not satisfying this need.

Bowlby retired in 1972, although he continued to write for the rest of his life and do research. This important psychoanalyst died on the Scottish Isle of Skye on September 2, 1990, at the age of eighty-three.

His legacy is extensive: despite the fact that his theory has undergone several modifications and has been interpreted by multiple authors, continues to have a great influence on psychology by emphasizing the importance of the affective bond with our parental figures in childhood. It has also served to develop different techniques and mechanisms of evaluation, such as the strange situation of Ainsworth.