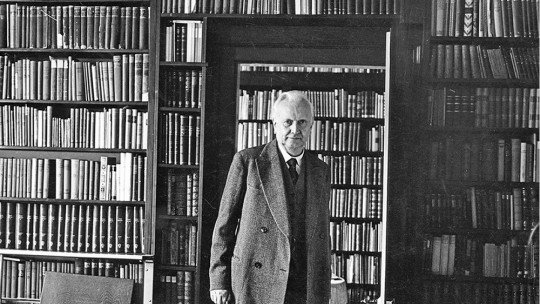 Existentialist philosophy is a model of thought that focused on the study and reflection of the human condition, on the freedom of people and their responsibilities as individuals; as well as on the emotions and the meaning of life.

This current originated in the 19th century and extended until the second half of the 20th century, Karl Jaspers being one of its creators and a great defender of it. In addition to being one of the great promoters of existentialism, this German philosopher and psychiatrist greatly influenced both psychology and philosophy as well as theology. This article will focus precisely on the history of his life, the biography of Karl Jaspers , as well as on his contributions to different disciplines of knowledge.

Who was Karl Jaspers? Biography and career

Born in Oldenburg on February 23, 1883, Karl Theodor Jaspers was a famous psychiatrist and philosopher whose influence on psychiatry and modern philosophy has led him to appear in all the books of the history of both disciplines.

This popular German thinker studied and received his doctorate in medicine at his hometown university in 1909. His beginnings in the world of work began at the psychiatric hospital of the University of Heidelberg, known as the workplace of psychiatrist Emil Kraepelin only a few years earlier.

But Jaspers did not like the way the scientific society of the day treated research into mental illness, so from then on his goal would be to change the perspective of this research. This need led him to settle down temporarily as a professor of psychology at the same university. Eventually, he became permanent and never returned to clinical practice.

Wartime exile and return to Germany

At the height of Nazism, Jaspers had to leave the management of the university , since his opposition to the system and his wife’s Jewish origin cost him expulsion from the education camp, without being able to return until the end of Hitler’s mandate.After the fall of Nazi rule, the doctor-turned-teacher was able to regain his position and, moreover, help to restore German education.

At this time, he was able to enjoy a public life that was well integrated into German society once again. In 1947 he was awarded the Goethe Prize , and in 1959 he received the Erasmus Prize for his contribution to the recovery of Europe.

Last years of life and death in Basel

During his stay in Heidelberg, Karl Jaspers was extremely disappointed by the German political context and in 1948 he left for the University of Basel. Finally, in 1961 he retired from teaching due to his advanced age.

Jaspers questioned the democracy of the Federal Republic of Germany in his work The Future of Germany , written in 1966. Due to the poor reception that this work had among the political class, Jaspers was forced to adopt Swiss nationality in 1967 , dying in the same city of Basel a couple of years later.

Jaspers’ contributions to psychology and psychiatry

As mentioned above, Jaspers never fully agreed with the medical society’s understanding of mental illness, creating an ongoing discussion about whether both the diagnostic criteria and clinical methods used in psychiatry were really adequate.

In 1910, he also developed a transformative test in which he considered the possibility that paranoia was a product of biological alterations or if it constituted another shade of personality. Although he did not contribute much in this matter, it did involve the creation of a new procedure for the study of human psychology.

This new change was based on examining and recording the patient’s biographical data and the way he noticed and felt his own symptoms. This new working formula became known as the biographical method , a method that is still used in psychological and psychiatric practice today.

Karl Jaspers and the study of delusions

One of Jaspers’ most famous quotes was: “the study of the psychic being requires an explanatory psychology, a comprehensive psychology and a description of existence”. From this point of view, psychology had to give answers to several fronts of questions that have to do with mental life.

Likewise, Jaspers thought that the same procedure should be used in the diagnosis of delusions , considering the way in which the patient held these beliefs and not only the content of these beliefs. From this he distinguished between two types of delirium: primary delirium and secondary delirium:

These arose without obvious reason, becoming indecipherable within the framework of normality and without a reasonable argument behind them.

These delusions seemed to be related to the person’s life history , to their context in the present moment or to their state of mind.

Finally, Jaspers captured his vision of mental illness in the work General Psychopathology (1913), a work that became a classic reference within the psychiatric literature and whose diagnostic guidelines have served as inspiration for modern diagnostic procedures.

The most relevant aspect of these works was the idea that opinion in psychiatric diagnosis should be based more on form than content . A valid example is that in the diagnosis of a hallucination, the form in which this hallucination is presented (visual, auditory, etc.) is more important than the content.

Jaspers’ thought has usually been incorporated into existentialist philosophy. The reason is that at the base of his ideas are the philosophy of Kierkegaard and Nietzsche, being the reflections on personal freedom very characteristic of his work.

In his three-volume work Philosophy (1932), Jaspers portrays his view of the history of philosophy, including his most relevant theses. In them, he establishes that when we doubt reality we cross the border that the scientific method cannot cross . Having arrived at this place, the person has two alternatives: to resign himself or to launch himself towards what Jaspers calls “transcendence”.

For Jaspers, “transcendence” is what a person finds beyond time and space. In this way, the person examines his or her own will, which Jaspers calls “existance,” and is thus able to really live true existence.

As far as religions are concerned, Jaspers censored any religious dogma, including the existence of a God. However, he also left an important mark on modern theology through his philosophy of transcendence and the frontiers of human experience.

Jaspers also reflected on the impact of science, politics and modern economics as a challenge to people’s freedom. This is a debate that is still very topical today.