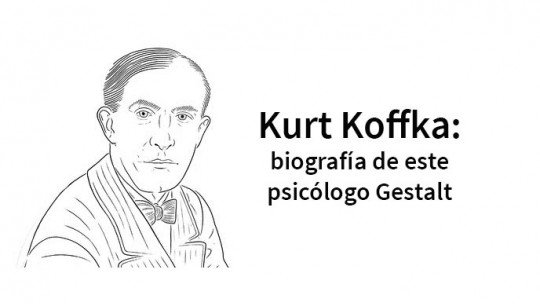 The German psychologist Kurt Koffka is widely known for helping, together with Wolfgang Köhler and Max Wertheimer, to lay the foundations of the Gestalt school, which in retrospect would be a fundamental antecedent for modern cognitive psychology as we understand it. We briefly review his trajectory and contributions to the history of psychology, paying special attention to his figure in the genesis of the Gestalt movement, inseparable from his other two companions but with his own personality, and the importance that this took on in the face of the reductionism in force at the time.

Koffka was born in Berlin in 1886 into a well-to-do family known for its long line of lawyers and legal scholars. From an early age, Koffka broke with tradition and instead of studying law, he studied philosophy at the University of Berlin.

Koffka felt that he belonged to this field and ended up getting his doctorate in 1908 . His thesis, entitled “Experimental Investigations of Rhythm”, is carried out under the tutelage of Carl Stumpf, an important representative of phenomenological psychology. During this period he lived in Edinburgh, which allowed him to perfect his English and obtain an advantageous position with respect to his colleagues in order to introduce his theories in English-speaking countries before anyone else.

After working in different psychology laboratories that question the dominant German elementarism, Koffka travels to Frankfurt and Main where he associates with Köhler and a newly arrived Wertheimer with thousands of ideas about perception that could be tested in numerous experiments. These works would bear their first fruit in 1912, when Wertheimer publishes an article on the perception of movement that gives birth to the movement that constitutes the Gestalt school.

Several years later, after the First World War, he moved to the United States as a university professor and participated, together with Köhler in 1925, as a representative of the Gestalt movement in the Clark University conferences, conferences in which figures such as Freud and Jung had also participated years before.

Koffka remained active as a university professor, researcher and writer until his last day in 1941.

Koffka’s contribution from the Gestalt

It is impossible to talk about Koffka’s contribution without taking into account the unique collaboration that gave birth to the gestalt movement. The three names originally associated with it form an indissoluble triumvirate and, to some extent, it is difficult to attribute particular aspects of the theory to each.

However, each of the three played a different role in the group and made their own contribution, always from a common base and with respect for the work of the other two.

In the context of a gestalt psychology that breaks with reductionism, which postulated that if psychology was a science then it should be capable of reducing phenomena to constituent elements, Koffka is attributed a great body of empirical work .

Probably his most famous contribution is the systematic application of the Gestalt principles in his two best known works: The Growth of the Mind (1921) and Principles of Gestalt Psychology (1935).

In The Growth of the Mind, Koffka argues that early childhood experiences are organized as “everyone”, rather than the chaotic confusion of stimuli that newborns perceive, according to William James. As they grow older, says Koffka, children learn to perceive stimuli in a more structured and differentiated way, rather than as a “whole.

Koffka devotes a large part of this book to arguing against trial-and-error learning. He, through Köhler’s research, defends the insigh t . In other words, true learning occurs through understanding the situation and the elements that make it up , not through finding the solution to a problem by pure chance. This revolutionary concept contributed greatly to the shift in the American pedagogical approach from rote learning to learning by understanding.

In Principles of Gestalt Psychology, Koffka continues with the line of research from which the gestalt movement was originally born: visual perception . In addition, he brings together the enormous amount of work carried out by the members of the gestalt group and their students and delves into topics such as learning and memory.

Koffka gives a lot of importance to works on perceptual constancy, through which humans are able to perceive the properties of an object as constant, even if conditions such as perspective, distance or lighting change.

When talking about learning and memory, Koffka proposes a theory of traces. He assumes that each physical event experienced causes a specific activity to emerge in the brain, which leaves a trace of memory in the nervous system even though the stimulus is no longer present.

Once the memory trace is formed, all subsequent related experiences will involve an interaction between the memory process and the memory trace. This circularity where the old traces affect the new processes is reminiscent of Piaget’s theories, which together with Lev Vygotsky would become the foundation of constructivism.

Likewise, following this theory also explains the oblivion. It gives a very important role to the availability of traces, an idea that is surprisingly similar to the explanations we have today about memory.

It is undeniable that Koffka, as an individual and as the founder of the Gestalt, is a fundamental pillar of modern psychology . Both through cognitivism and constructivism, we see his legacy reflected.