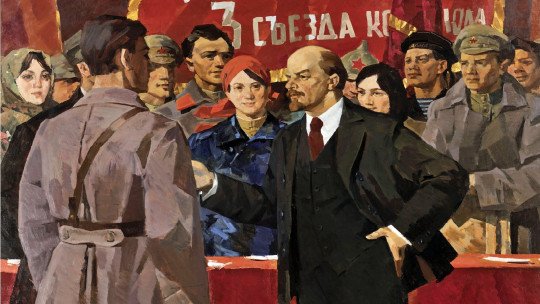 Vladimir Ilyich Ulyanov (1870 – 1924) is an essential figure for understanding the development of European politics in the 20th century.

A Russian politician, revolutionary and communist writer, he led the Russian Social Democratic Workers’ Party to the October Revolution of 1917, which ended the rule of the Tsars and ushered in a period of socialism in the Union of Soviet Socialist Republics (USSR). His contribution to the theoretical legacy of Marxism is known as Leninism.

Once in power, Lenin applied several reforms to return to the State all those goods and means of production that until then were the fiefdom of a privileged few. His role in the First World War was also controversial.

His fundamental role in understanding the Russian Revolution and his theoretical writings make Lenin an object of study in any social science faculty. In today’s article we will approach this historical figure through a compilation of the best phrases of Lenin .

1. We must dream, but on the condition that we believe in our dreams. To examine real life carefully, to confront our observation with our dreams, and to scrupulously realize our fantasy.

2. A small but useful work,” says Mr. Krivenko in great depth, “is much better than great entertainment.

Anything that brings us closer to progress is welcome.

3. It is true that freedom is a precious thing, so precious that it must be carefully rationed.

Paradox about freedom, one of Vladimir Lenin’s most remembered phrases.

4. Marxism is all-powerful because it is true.

On Karl Marx’s ideals, which Lenin made his own and developed.

5. Revolution is war, the only truly legitimate, just and great war, among those that history has known. In Russia, this war has been declared, and it has begun.

Lenin’s sentence pronounced in 1905, years before the end of the tsars’ empire.

6. One capitalist devours many others.

On the voracious character of the capitalist system.

7. The intelligentsia runs the manufacturers’ businesses and can run the people’s industry.

8. Monopolies and similar institutions can and must of course be challenged, as they undoubtedly worsen the situation of the worker;…

On monopolies and oligopolies and their devastating effect on the economy of employees.

9. That among Marxists there is not complete unanimity, it is true…, this fact does not demonstrate the weakness, but precisely the strength and vitality of Russian social democracy.

On the different ideological currents that make up Marxism.

10. It is a truth that is often learned in politics from the enemy.

Knowing the enemy’s strategy gives you good ideas to apply to your own strategy.

12. Revolution is not made, but organized.

Peculiar view on the verb to be used.

13. Such is the mercantile economy, which necessarily gives rise to competition between producers of goods, inequality, the ruin of some and the enrichment of others.

On the endless loop of capital.

14. Imperialism emerged as a direct development and continuation of the fundamental properties of capitalism.

One of Lenin’s most commented and studied phrases.

15. The idea of determinism, which establishes the necessity of man’s acts and rejects the absurd legend of free will, does not in any way nullify man’s intelligence or conscience, nor the value of his actions.

16. That’s Trotsky! Always true to himself; he shuffles, swindles, poses on the left and helps on the right.

Excerpt from a letter in which he makes clear his animosity towards Trotsky.

17. Except for power, everything is illusion.

Reflection on some wise words of Karl Marx.

19. The State is the weapon of repression of one class over another.

Your definition of the modern state.

21. Capital becomes a hindrance to the mode of production that has flourished alongside it and under its protection.

Another reflection on the functioning of capitalism.

22. The new means for control have been created not by us but by capitalism in its military-imperialist stage.

Imperialism, of course, develops weapons and all kinds of devices for the control and repression of the population.

23. Moreover, in order to abolish corporate profit, it will be necessary to expropriate the employers, whose profits come precisely from the fact that they have monopolized the means of production.

One of the basic precepts of Marxist doctrine.

24. Music can be a means for the rapid destruction of society.