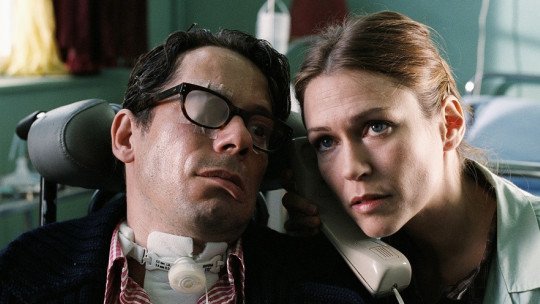 Imagine being trapped in a totally soundproof prison, from where all the information comes to you from the outside but your voice and actions cannot be seen through the walls. You can’t do anything or talk to anyone or interact with the environment. The world knows that you exist, but apart from that it can hardly know how you feel or what you think.

Now imagine that prison is nothing but your own body. This is what happens to people who suffer from the so-called locked-in syndrome , a medical condition so disturbing that there is already at least one film whose plot revolves around it: The Diving Bell and the Butterfly.

Locked-in syndrome is a neurological syndrome in which the subject is unable to perform any motor activity despite maintaining consciousness. The person is able to perceive the environment normally and is conscious, but cannot participate or respond to stimulation. Generally, the only exception to this fact is eye movement and possibly upper eyelid movement , which are preserved.

People who suffer from this syndrome maintain practically all their cognitive functions, with the affectation being only motor. Although their muscles do have movement capacity, motor commands are not transmitted to them. The same happens with the voice.

The subject is quadriplegic, completely paralyzed , and may lose the ability to breathe on his own. Due to the symptoms (the subject is conscious but cannot move anything except his eyes, and this is not in all cases), extreme panic, anxiety, depression and emotional lability are very common.

Generally this syndrome occurs in two phases: in the first phase the articulation capacity and movement is lost and it is possible that the consciousness and basic physiological capacities are lost, but in the chronic phase the consciousness, eye movement and respiratory capacity are recovered.

Locked-in syndrome can be easily confused with coma , or even with brain death, due to the absence of a noticeable motor reaction (if total locking in occurs there may be no possibility of moving the eyes). In some cases it has even taken years to identify the patient as being aware of what is happening around them.

Types according to the level of paralysis

It is possible to make a classification of types of locking up syndrome , according to the degree of affectation and the capacities that have been maintained. Generally, three types of presentation can be found.

This is the type of lock-in syndrome in which the subject cannot perform any voluntary motor action beyond eye movement , while remaining aware of the environment. They can blink and move the eye, but only vertically

In this case, the level of paralysis is similar but in addition to the movement of the eye, some fingers or even parts of the head can be moved.

The worst of the three subtypes. In total enclosure syndrome the subject is not able to perform any type of movement, not even of the eyes. The gaze remains paralyzed and immobile. In spite of this, the subject remains aware of what is happening around him.

Etiology of this syndrome

Locked-in syndrome occurs because of a brain lesion, specifically in the brainstem. Most often, the damage is to the bump. It is the rupture of nerve fibers in this area that causes generalized motor paralysis and horizontal gaze control.

This fibre rupture is usually caused by a stroke or ictus with effects in that area, although it may also appear due to head injuries or diseases or tumours. In some cases it has been caused by an overdose.

Depending on its causes, the confinement syndrome can be chronic or transitory, the latter being the one that admits partial or even complete recovery of functions in a progressive manner.

Locked-in syndrome has no treatment or therapy that will allow it to be cured. In some cases, if the cause of locked-in syndrome is transient or can be recovered , improvements may occur and the patient may be able to perform certain movements.

In most cases the treatments applied are mainly aimed at keeping the person alive and ensuring that they can breathe and feed themselves (the latter by tube) properly. Also to avoid the emergence of complications derived from the absence of movement (for example avoiding ulcers and sores due to remaining in the same position for a long time, monitoring nutrition, injecting drugs that allow blood to flow properly throughout the body and not form clots). Physiotherapy is also used to maintain the flexibility of the joints and muscle groups.

Another major goal of the treatment is the development and learning of methods that allow the patient to communicate with their loved ones, such as through the use of pictograms or through eye movement. In some cases it is even possible to use ICT as an element of communication thanks to the translation of these eye movements. In cases where the eyes are not mobile either, it is possible to establish simple communication codes through elements that record brain activity, such as the electroencephalogram.

The feelings of loneliness, incomprehension and panic that these subjects usually suffer must also be taken into account, so counselling and possible treatment at a psychological level would be useful. Psychoeducation for both them and their families can also be very useful, so that it helps to generate guidelines that allow the management of the situation.

The overall prognosis for this condition is not positive .Most cases tend to die within the first few months, although they may sometimes live for many years. In some cases, part of the muscle function may recover. And although it is exceptional, in some cases, such as in the case of Kate Allatt, a complete recovery has been achieved.