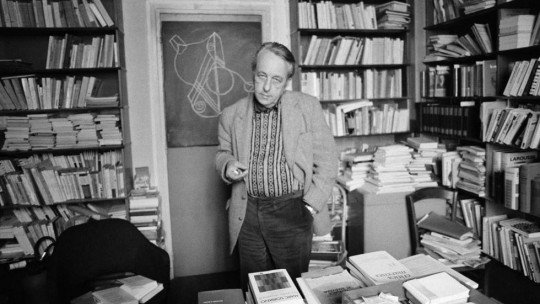 The work of a multitude of thinkers and philosophers has contributed over the years to the development of knowledge and theoretical bodies that explain how the world and the society in which we live work, as is the case with Marxism, a philosophical, political and economic doctrine whose influence endures to this day.

One of the characters who contributed to the analysis of the Marxist doctrine was the structuralist philosopher Louis Althusser , who we will talk about throughout the article, describing his biography and his most outstanding works.

Who was Louis Althusser?

Louis Althusser (1918-1990), born in Algeria, was a renowned Marxist philosopher and an outstanding academic supporter of the French Communist Party . Althusser is commonly known as a structural Marxist, although both he and Michel Foucault refused to be classified as authors of this philosophical trend.

He studied in Paris at the prestigious École Normale Supérieure, where he eventually became a professor of philosophy. Aus arguments were a response to multiple threats to his ideological foundations, including the influence of empiricism and a growing interest in democratic socialist and humanist orientations.

Althusser believed that Karl Marx’s theories had been misinterpreted because they had been seen as a single theoretical body of work, when in fact Marx had experienced an “epistemological break” that separated his later works from his earlier humanism. Althusser declared that Marx had developed a ground-breaking historical theory that considered the individual as a product of society, culture and ideology.

In addition, Althusser asserted that Marx had analyzed society in terms of social and political units called “practices” rather than in terms of the individual. His ideas later influenced several 21st century thinkers, including Jacques Derrida, G.A. Cohen, Anthony Giddens, Judith Butler and Slavoj ‘i’ek, and several of his students became eminent intellectuals.

Althusser’s early works include the influential volume “To Read Capital,” a collection of the work of Althusser and his students on an intense philosophical re-reading of Karl Marx’s “Capital. The book reflects on the philosophical state of Marxist theory as a “critique of political economy” and on its object.

The project was somewhat analogous, within Marxism, to the return of contemporary Freudian psychoanalysis undertaken by Jacques Lacan, with whom Althusser was also involved (and with whom he shared moments of friendship and enmity at the same time). Several of Althusser’s theoretical positions have remained highly influential in Marxist philosophy, although he sometimes deliberately exaggerated his arguments to provoke controversy.

In his essay “On Young Marx” he takes a term from the French philosopher of science, Gaston Bachelard, by proposing a great “epistemological break” between Marx’s early writings, with a more “Hegelian” (from the philosophical system founded by Georg Wilhelm Friedrich Hegel) and “Feuerbachian” style (in reference to Ludwig Andreas Feuerbach, intellectual father of atheistic humanism) and his later, properly Marxist, texts.

On the other hand, in another of his essays, “Marxism and Humanism,” Althusser shows a strong statement of anti-humanism applied to Marxist theory, condemning ideas such as “human potential” and “being-species,” which Marxists often propose as a consequence of a bourgeois ideology of humanity.

In the chapter “Contradiction and Overdetermination” of his work “Marx’s Theoretical Revolution” he borrows the concept of overdetermination (the idea that a single observed effect is determined by multiple causes at once) from psychoanalysis, to replace the idea of “contradiction” with a more complex model of multiple causality in political situations.

This last idea is closely related to Antonio Gramsci’s concept of hegemony, which defines it as the socio-political power derived from allowing the “spontaneous consent” of the population through leadership or intellectual and moral authority, as employed by the subordinates of the State.

Althusser is also widely known as a theorist of ideology , a concept based on Gramsci’s theory of hegemony and which he establishes in his essay “Ideology and Ideological Apparatus of the State: Notes towards an Investigation”.

For Althusser, hegemony is determined entirely by political forces, while ideology is based on Freud and Lacan’s concepts of the unconscious and the mirror stage (the stage in which the child is first able to perceive himself).

As we discussed at the beginning, Althusser felt that Marx’s thinking had been fundamentally misunderstood and underestimated. He firmly condemned various interpretations of Marx’s works on the grounds that they had failed to realize that with the “science of history,” historical materialism, Marx had built a revolutionary vision of social change.

Althusser believed that these misinterpretations resulted from the mistaken notion that all of Marx’s work could be understood as a coherent whole. Instead, Althusser argued that Marx’s work contains a radical “epistemological break”. Althusser’s project was to help the world fully understand the originality and power of Marx’s extraordinary theory , paying as much attention to what is not said as to what is explicit.

Yet Althusser argued that Marx had discovered a “continent of knowledge. He compared Marx’s ideas about history with Thales’s contributions to mathematics, Galileo to physics, or Freud to psychoanalysis, claiming that the structure of his theory was different from any proposal of his predecessors.

Althusser concluded that “Capital” provided both a model of the economy and a description of the structure and development of a whole society. He also considered the epistemological breakdown as a process rather than a clearly defined event.

He described Marxism and psychoanalysis as sciences that always had to fight against ideology, thus explaining the ruptures and divisions that followed, because their two objects of analysis, “class struggle” and the unconscious human mind, were divided and separated from each other.