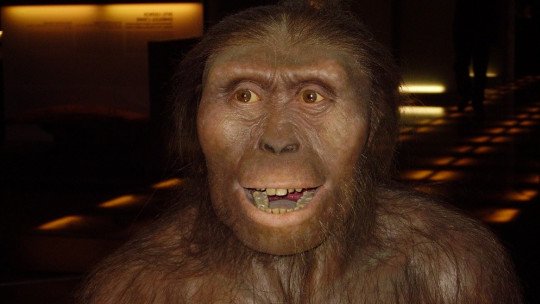 There are many evolutionary and anthropological theories about the origin of our species, who the first human bipeds were, or what biological chain the human species came from. However, the fossil records serve to clarify these unknowns.

In this sense, one of the most famous skeletons in the world is that of Lucy the Australopithecus . Next we will see what its value is based on, and why thanks to this finding we know more about the human being.

Who is Lucy the Australopithecus?

It was the autumn of 1974, when one of the most important discoveries in the history of mankind was made outside the Ethiopian capital, about two hours away by car, in Hadar. Lucy is the result of excavations in which approximately 40% of the remains of a skeleton were recovered . The scientists took weeks to confirm which species they belonged to.

The paleontologist Donald Johnson and his team concluded that the remains of bones discovered correspond to the species Australopithecus afarensis , ancestor of Homo sapiens and that it explains more clearly the relationship between the rest of the primates and humans.

Lucy was a female who was just over a meter tall, had legs very similar to those of humans, lived about 22 years and weighed about 28 kilos.

One of Lucy’s most telling characteristics is that, as a female, she was found to have had children. How many children? We do not know for sure, but it is estimated that could have given birth to no less than three .

Lucy’s name is not accidental. A team of paleontological researchers, in one of their activities in the African country of Ethiopia, discovered some skeletal remains while listening to the music of the Beatles . They heard the famous success of Lucy in the sky of diamonds , and they won the prize. According to National Geographic sources, this fossil is 3.2 million years old.

Another data to take into account is the evolutionary facet of the brain. It has been highlighted that in Lucy the Australopithecus the intelligence was not too high. As far as the size of the cranial cavity is concerned, and it was at the same level of development as that of a chimpanzee , a phenomenon that occurred due to Lucy’s limited capacity on a physical level to interact with her environment, with the impossibility of handling objects and constructing her reality.

On the other hand, the part of Africa where Lucy was discovered is where the most significant findings in this field have been made. Many of the clues in the evolutionary chain lead there. After the discovery of this set of fossilized bones, some 300 fossils of 17 different individuals have been found.

A fossil on international tour

Due to the great importance of the specimen on a scientific and historical level, Lucy is kept “under lock and key” in the Museum of Natural History in Addis Ababa , in Ethiopia. Nothing and no one can get close to her, as the remains are in an armoured security chamber, with private guards and infrared cameras. Attempts have sometimes been made to remove some pieces from the skeleton, especially in some years of internal conflict that put the museum’s security in jeopardy.

However, with political stability consolidated in the African country, the Ethiopian government decided to take Lucy out in 2007, organizing a costly and dangerous trip to the United States of America. The logistics were not without danger, so it chose to charter a private flight. The trip lasted 7 years, and different cities and states were able to meet Lucy first hand.

The same happened to the now former American president, when on an official visit to Ethiopia he was granted the privilege of visiting the chamber where Lucy rests. Not only that, but the authorities allowed them to directly caress the bones of the skeleton.