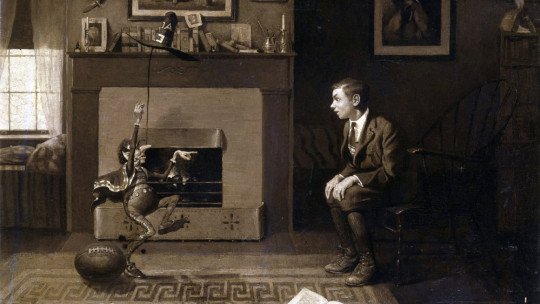 Magical thinking has accompanied humanity since the beginning of time. We have a natural tendency to establish relationships of cause and effect without checking them in a logical way; this predisposition is very marked in childhood and is maintained if the context in which we find ourselves promotes it, as has happened in many cultures.

In this article we will define magical thinking and explain its causes and functions , according to the existing literature. Finally, we will present some significant examples and contexts in which this type of reasoning appears regularly.

What is magical thinking?

The concept “magical thinking” is used in psychology and anthropology to describe illogical attributions of causality that are made without empirical proof , especially when the person believes that his thoughts can have consequences in the external world, either by his own action or by the intermediation of supernatural forces.

Magical thinking is present in the vast majority of the world’s cultures. It is a natural process, probably with a biological basis similar to that of classical conditioning, by which we rely on the similarity or temporal or spatial contiguity between elements, for example, to establish an unprovable causal relationship between them.

So, a girl who thinks that if she misbehaves the bogeyman will kidnap her is falling into this logical error. The same is true for tribes who perform ritual dances to invoke the rain or for people who think that their wishes will be fulfilled if they light a candle and entrust themselves to a certain saint.

The belief that mind has power over matter , as if it constituted a separate entity rather than a consequence of it, may be at the basis of many cases of magical thinking. However, it is a concept with a very wide meaning, so it has been used to refer to very diverse processes.

Magical thinking has been attributed mainly to two facts: the contiguity between events (e.g. “My father died because I wished him dead the day before”) and associative thinking, which consists of establishing relationships based on similarities. For example, the Mapuche believed that they would get strength from their enemies if they ate their heart.

Authors such as Claude Lévi-Strauss or Thomas Markle have stated that magical thinking has adaptive functions in certain circumstances . However, when it comes to attributing causes, this type of reasoning tends to fail much more often than that based on empirical evidence.

One of the main functions of magical thinking is the reduction of anxiety. When people find themselves in a stressful situation that they cannot resolve, it is easier for them to associate anxiety reduction with arbitrary elements in order to gain a certain sense of control. For example, in agoraphobia it is common to use “charms”.

Even in today’s world, in which we believe logic predominates, magical thinking still has a significant presence and is even useful at times. A good example is the placebo effect, by which the very fact of believing that a false remedy is going to be useful to cure a disease causes an improvement in the symptoms.

We can find signs of magical thinking in a large number of everyday situations, although in some cases this type of reasoning can be a sign of pathology, particularly when the beliefs are given in adulthood and are not shared by the environment.

Between the ages of 2 and 7, during the pre-operational stage described by Piaget , children believe that they can modify elements of the world with their mind, either voluntarily or involuntarily. At this age, thinking is characterized by difficulty in understanding abstract concepts and by self-centeredness, or inability to adopt the perspective of others.

These kinds of ideas most commonly appear when the death of a loved one occurs; in these cases children tend to believe that they are somehow to blame. However, arbitrary causal attributions and illogical thinking in general, favoured by a lack of understanding of the world, are very typical of childhood.

Magical thinking is very common in children because it is inherent to human nature. As cognitive development progresses , the frequency of this type of ideas diminishes , at least if the social context favours rational thinking; if this is not the case, magical beliefs can be transmitted from generation to generation.

Superstitions are beliefs without logical foundation or scientific proof. They are a type of magical thinking, although it is difficult to delimit what exactly constitutes a superstition; for example, religions do not tend to be seen as superstitions even though the only criterion that distinguishes them is that they are shared by many people.

As with magical thinking in general, superstitions are more common when people are under stress. Thus, it is typical for those who do not firmly believe in the existence of gods but also do not completely rule them out to try to communicate with them when they are desperate.

Some superstitions and supernatural ideas are transmitted through culture. This has happened with countless myths throughout history, and it is also common for children to be led to believe that there is a Santa Claus, the Three Kings or the Tooth Fairy. Constructs such as fate and karma are also good examples of magical thinking.

Sometimes the rituals characteristic of obsessive-compulsive disorder (OCD) can be classified as magical thinking. This is more common in cases where the person is unaware that he or she has a disorder or exaggerates the realism of his or her beliefs.

In particular, people with OCD often believe, or at least fear, that a disproportionately serious misfortune could happen if they don’t perform the ritual. For example, someone with OCD might think that if he dropped a burning cigarette butt on the carpet, his entire floor would burn down in seconds.

Magical thinking often appears in delusions, whether or not they occur in the context of a spectrum disorder of schizophrenia . While in delusional disorder irrational beliefs tend to have a relatively credible structure, in the case of schizotypal disorder and especially paranoid schizophrenia the beliefs are more bizarre.