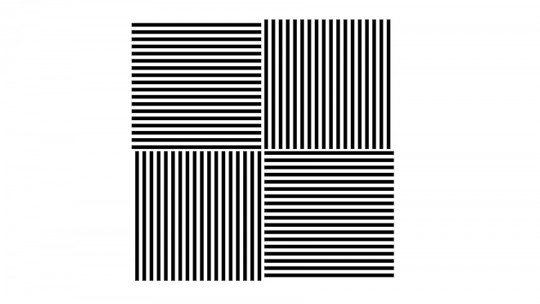 Optical illusions can be very curious. Generally, they occur when we are exposed for a time to very specific patterns of shape and/or color; altering the conventional way we perceive lines, curves and even more complex stimuli (the human face, for example).

Illusions are also phenomena that are expressed in completely healthy people, and generally revert in just a few seconds. This is what distinguishes them precisely from hallucinations, which usually persist and are not derived from objects within the perceptual frame.

In this article we will deal with what is one of the most relevant optical illusions in the history of science, the McCollough effect, whose peculiarities have surprised the entire research community for decades. In fact, we still do not have a theoretical model that can explain it in its entirety.

What is the McCollough effect?

The McCollough effect was discovered in 1965 by Celeste McCollough, a psychologist who was already studying other perceptual phenomena in the first decades of the last century, although it was defined more comprehensively in subsequent years.

This is an optical illusion included in the category posteffect, i.e. post-images that require a previous period of exposure to a specific pattern of stimuli in order to unfold. In these cases, very specific colours or shapes are often used, which only affect the most superficial aspects of visual processing and last a few seconds.

The effect at hand, however, is somewhat more complex and has been seen as a potentially explanatory mechanism for the way in which visual stimuli are usually integrated at the central level. For this reason, for many years, since it was first described, it has motivated varied research in which the original methodology has changed in order to explore the exact origin of the phenomenon. However, there is still a lack of definitive knowledge on the subject, although there are some clues that guide where to look next.

Next we will see how to perform the procedure or, which are the “effects” that can be foreseen after it and the mechanisms that are at its base. However, it is essential to point out at this point that we are not dealing with a game, but with a methodology that favours changes in brain structures and that can be maintained for quite some time (depending on how it is carried out). Everything that is described below comes from the scientific background on this issue and it is interesting to know it, but it should not be carried out without the corresponding information and always under the full responsibility of whoever decides to do so.

The McCollough Effect (like the rest of the illusions in its category) requires a prior induction stage, in which the person must be exposed to two colored grids alternately. Specifically, this is a pattern of red horizontal lines (on a black background) and another of green vertical lines (with the same background). Both are shown to the subject for about three seconds, oscillating from one to the other for a period of time that generally extends three minutes (although this may vary according to the intention of the person carrying out the study).

After this adaptation period, the person is shown a figure made up of black/white lines, arranged both horizontally and vertically. It is a complex grid that includes the patterns described above, but at this stage it lacks any chromaticity (it only retains the direction of the lines). This new stimulus is presented to the subject in a contingent manner (at the end of the induction phase), and over it the first evidence of perceptual alteration is manifested. Sometimes, this monochrome figure is also shown before the induction, so that it can be seen that it really lacks colour and the effect is more evident.

After exposure to the coloured grids, the person will notice that the originally monochrome grid will take on different shades in the white spaces. More specifically, it will be seen that the horizontals will take on a greenish hue and the verticals a reddish/pinkish hue. That is, the “inverses” to those shown during the previous period of induction (their negatives). Up to this point it is nothing too striking or novel, since there is a great variety of “tricks” to reproduce the same effect, but in the one that concerns us there would be a particularity: it can last many days, up to three months and a half in the case of very long periods of induction.

The effect has also been reported with different coloured lines, such as blue and orange , with results whose duration is directly related to the induction time. Thus, it has been tested with periods of just a few seconds and up to 150 minutes, being in the latter cases where a greater persistence of the post-image is referred to. In any case, there were many people who used computer monitors (green phosphorus) in the 60s and 80s who could offer a pioneering testimony on this matter, since they referred to reading books with a pink or soft red background.

Furthermore, it has been proven that the intensity of the post-image colours is also linked to the total time of previous exposure, so that those who only see the original green/red frames for a few minutes will only be able to distinguish pale negatives from both (light green and pink shades), but those exposed for ten minutes or more will appreciate them much more vividly and clearly . Thus, both the intensity and the duration will depend closely on the previous period of induction.

Another very curious fact about the McCollough effect is that what is known as an interocular transference occurs: even if the test is carried out using only one eye, its consequences extend to both eyes. Many of our readers may be able to evoke the experience of exposing their eyes (unwillingly) to different levels of light, so that one eye perceives darker tones and the other lighter ones. In such a case there would be no interocular transference, since the effect is in the retinal cells related to light perception (rods/cones), but then… what happens in this case? Let’s continue to investigate.

Many different theories have been put forward over the years to explain why the McCollough effect occurs, but we still have only partial knowledge of the issue. The first hypotheses were based on the possibility that it was a phenomenon based on the principles of classical or Pavlovian learning (remodelling of the nervous system based on the continuous presentation of the stimulus), but this was rejected because it only occurred with linear figures, and not with curves or other more complex forms.

The second hypothesis was related to the activity of retinal cells associated with colour : the cones, since they have photopigments for blue (cyanolabe), red (erythrolabe) and green (chlorolabe); which tend to decline due to chromatic antagonism resulting from simple overexposure. This is what usually happens during a conventional post-image illusion. However, in these cases the change is only maintained for a few seconds (a few minutes at most), and there is never a transmission from it to both eyes, so it is a line that was ruled out for the McCollough effect.

On the other hand, it is clear that in a natural environment the green/red linear pattern that forms the stimulus that triggers this illusion can rarely be seen, so it is possible that the brain interprets it as a kind of sensory aberration and provides mechanisms to “compensate” for it during the processing of visual information. In this case, for its explanation we should resort to the substrate of the central nervous system, ignoring the learning and sensory theses. Is it possible that the answer is found, precisely, in this mysterious organ?

The brain and the McCollough effect

When we are exposed to a stimulus for a long time, the brain stops trying to pay attention to it and simply “understands” that it is like that, and then “ignores” it and leaves its resources available to perceive the rest of the things in the environment. The same thing could be happening to you right now if you’re reading this article from a mobile phone: even though you’re holding it in one hand, your brain is isolating everything that is accessory to the experience (its feeling of weight, for example), and is only making an effort to understand the text. A similar phenomenon occurs with the illusion at hand.

When the eyes are exposed to the green/red lines constantly, the brain comes to understand that this pattern (very rare in nature) will always be so in any of the possible situations. For this reason, will anticipate it in the presence of stimuli that harbour a similar relationship with it, such as monochrome horizontal and/or vertical lines . This will also occur during the first phases that follow as part of the visual processing, but beyond what occurs before reaching the retina (due to the aforementioned interocular transference effect).

Thus, the primary visual cortex, which is located in the posterior region of the parenchymal brain (occipital lobe), is the focus of attention in recent years. This area (V1) is specialized in the perception of static and moving objects, but above all in pattern recognition (such as those that occur during the induction phase of the McCollough effect). It is also the point where the images of both eyes merge , forming integrated and coherent scenes (binoculars).

The hypothesis that is currently under consideration implies alterations in this area, which is basic to understanding the way we represent colors and shapes at a cortical level. Despite this, they are still uncorroborated models, heuristics that serve to guide research activity (based on neuroimaging techniques and comparative studies that include subjects with very diverse brain injuries).

Although this effect tends to become diluted over time, there is also a supposed method for dealing with it. In such a case, new grids would be presented (but with their color lowered) to help the brain relearn that the previous pattern is no longer valid (and to recover a “normalized” perception). The McCollough effect is considered a method of “modifying” brain structure through exposure to an image, and although its effect is not permanent, it should not be carried out without precise knowledge of what it is and its extent.