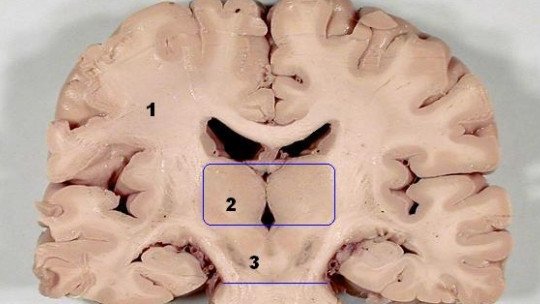 The midbrain is one of the most important parts of the brain , in many ways. On the one hand, it is located almost in the center of the brain, occupying a part of its deepest area, and therefore it establishes a direct communication with many of the main structures of the central nervous system.

On the other hand, it is the area that joins the brain stem to the diencephalon and parts of the cerebral cortex. Without the midbrain we could not survive.

We will now look at the characteristics of this region of the brain, review its main functions and its various anatomical components, and see what happens when certain injuries or diseases alter its functioning.

What is the midbrain?

In addition, the midbrain is crossed by a narrow channel called the Silvian Aqueduct , through which the cerebrospinal fluid flows from the third ventricle to the fourth. This fluid has the function of isolating and protecting various structures of the nervous system.

The shape of the midbrain is that of a trapezium, with a narrower base than its upper part, and with the Silvio aqueduct (a small channel through which cerebrospinal fluid circulates) running up and down it.

The border between the midbrain and the diencephalon is marked by the optic bands (the continuation of the nerve fibres of the optic nerves), while its lower limit, which separates it from the pons Varolio bridge, is indicated by the pontomesencephalic sulcus .

In addition, on its anterior face (near the face), a vertical slit called the interpeduncular fossa can be distinguished, which divides two bodies of nerve fibers that go up to the brain, called brain stem.

Parts of the midbrain

The two fundamental structures that form the midbrain are the tectum and the tegmentum .

It is located in the dorsal area of the midbrain, facing the neck, and etymologically it means “ceiling”. Its functions are related to automatic reactions to auditory and sound stimuli.

It is formed by two pairs of lumps, one placed on top of the other. These lumps are called collicles, or quadrigeminal tubers , and the upper ones play a role in vision and in the orientation of the eyes towards visual stimuli, while the lower ones are involved in involuntary reactions to sounds.

In the ventral midbrain area is the tegmentum. It contains three main regions, each associated with a colour: the black substance, the periaqueductal grey substance and the red nucleus .

The substantia nigra is located in the upper midbrain, and is distributed on both sides of this structure, following the division of the cerebral hemispheres. It has many associated functions, linked especially to movements and muscle tone .

It is another important element of the drive system. Its function is related to the coordination of movements .

The periaqueductal grey substance, which as its name indicates is located around the Silvio aqueduct, intervenes in the habituation to pain and in the analgesic processes in general.

The location of the midbrain means that the main functions of this structure have to do with the integration between different types of information . On the one hand, it collects nerve impulses linked to motor commands that have to be executed by muscles, and on the other hand it receives sensory data.

In the same way, the quadrigeminal tubers located in the tectum are in charge of coordinating this kind of information among themselves so that they can give rise to action sequences adjusted to what the senses are recording in real time.

On the other hand, certain regions of the midbrain are associated with processes of regulation of consciousness and sleep , as they are crossed by reticular formation. The midbrain also intervenes in homeostatic functions aimed at keeping the organism in good balance, and therefore, for example, it has a role in the regulation of body temperature.

Thus, the midbrain is responsible for carrying out processes of vital importance to keep the orgganism working, to the extent that the activity in this structure of the nervous system is what signals more clearly whether there is brain death or not.

Any injury that affects the lower areas of the brain can reach the midbrain. The consequences of this type of accident are almost always very serious, leading to coma or death .

The reason is that the midbrain is a section of the nervous system that is crucial for the coordination of basic physiological functions of the body, and also serves for various types of nerve impulses to reach the upper groups of neurons. As the midbrain acts as a link between many areas , the presence of abnormalities in this area affects many others.

As far as diseases affecting these brain structures are concerned, the most common are Alzheimer’s and Parkinson’s disease. Both are neurological disorders that interfere with the functioning of large areas of the nervous system, including the midbrain, and can lead to problems with mobility and cognition.